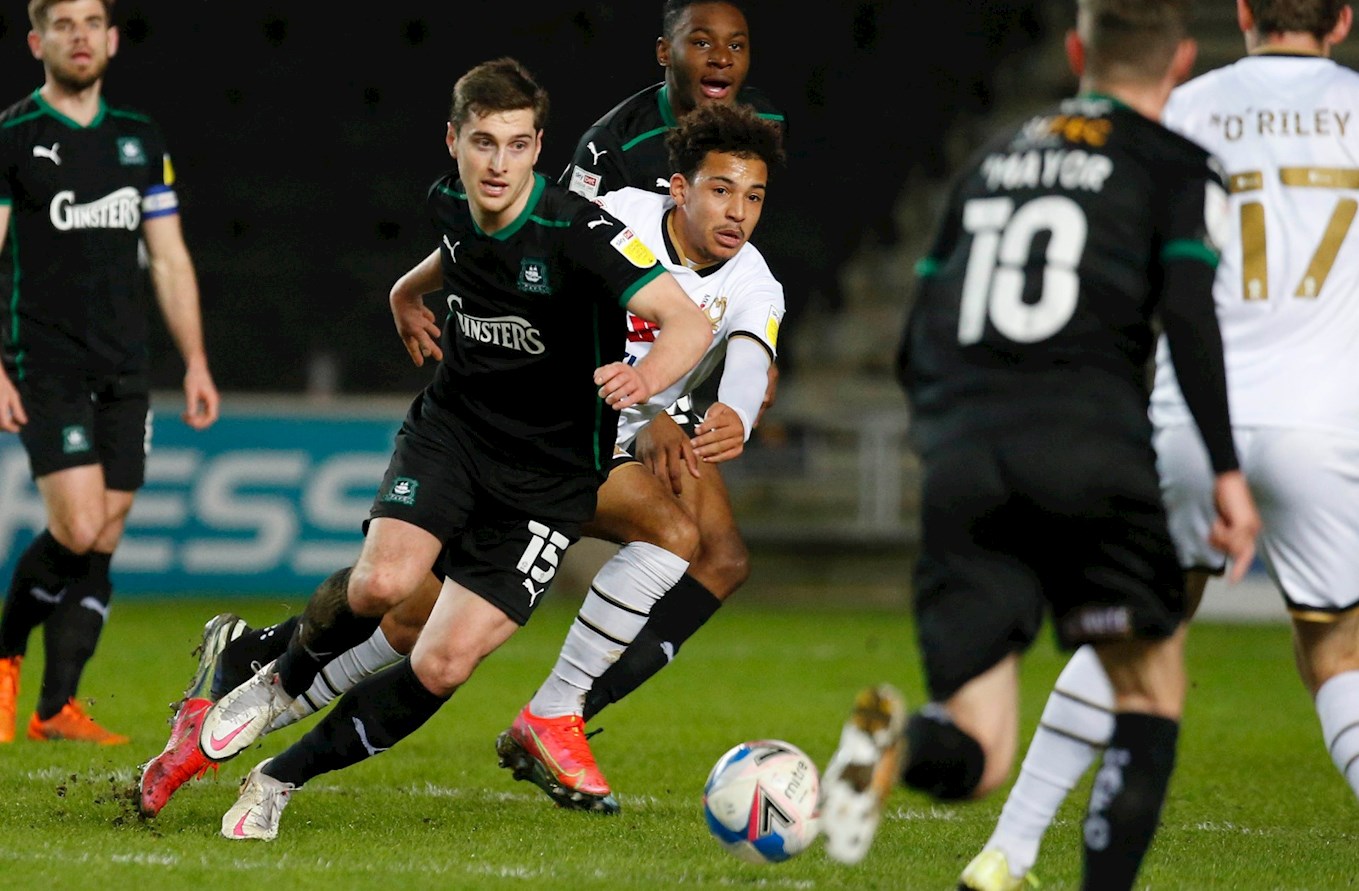 Football can be very harsh and cruel at times.

Argyle felt the pain at MK Dons after fighting back with immense spirit to equalise a first-half header from Cameron Jerome.

A Conor Grant special levelled matters on the hour for the Pilgrims and there was terrific intensity and endeavour from the men in Green, but the hosts pinched all three points with a last-minute penalty from Scott Fraser.

Argyle manager Ryan Lowe made two changes from the narrow defeat at Ipswich on Saturday, with Lewis Macleod and Adam Lewis dropping out. Tyrese Fornah came back into midfield, nudging Grant to the left, and Luke Jephcott was restored to the attack alongside Niall Ennis.

MK Dons boss Russell Martin had the luxury of naming the same side that secured a dramatic weekend win over Accrington Stanley, with Matt O’Riley grabbing a last-minute winner and experienced forward Jerome notching twice.

It was Jerome who had the first shot in anger, spinning from a throw to shoot goalward but Will Aimson had read the situation perfectly to make a solid block. Argyle replied with a clever run across the middle by Danny Mayor and a pass for Grant, but his progress was curtailed by Warren O’Hora.

The game lacked any pattern in the early stages, with Ethan Laird twice receiving treatment for an injured shoulder. When action did resume, Ennis brilliantly pounced on a shaky moment between Dean Lewington and goalkeeper Andrew Fisher.

He managed to pinch the ball and square a pass back inside for Jephcott, who had to measure his contact on a bobbly pitch and Harry Darling had done well to get back on the line to clear. The Dons came back with a long ball over the top to Jerome, who laid a pass to Fraser but Fornah recovered brilliantly to make a vital challenge.

Joe Edwards took control of the next situation, driving inside with fabulous intent after Panutche Camara had won the ball in midfield. The skipper slipped a pass to Mayor on the edge of the box and his steered low shot shaved the outside of the post.

A searing break from Ennis created the next opening but the eventual low cross from Grant was cleared by Darling. A similar move at the other end prompted responsible defending from Aimson.

The Dons broke the deadlock on 22 minutes, when Matthew Sorinola teased over a cross from the left and Jerome timed his leap perfectly to head past Mike Cooper and into the bottom corner.

While the slightly awkward surface was not helping Argyle’s passing game, there was still plenty of time to find their normal rhythm and a loose ball picked up by Mayor did allow for a cross that was well claimed by Fisher.

The Dons, however, were looking a confident outfit and the lively Darling marched through Argyle’s midfield, working the ball to Fraser for a drop of the shoulder and low shot thankfully aimed straight at Cooper.

The positive for Argyle was Ennis looking very sharp in attack, prompting the next moment of promise with a move that culminated in Mayor sending over a dipping cross that was just a fraction beyond the run of Camara to the near post.

A routine ball over the top found Jerome in the right channel and he caught ball sweetly on the half-volley, but the power of the strike was matched by the strength of Cooper’s wrists, brilliantly palming away the effort.

The Pilgrims ended the first half with plenty of work to be done and the recovery mission began with a superb threaded pass from Ennis to Mayor, who jinked on to his left foot for a rising shot well held by Fisher.

Former Chelsea midfielder Josh McEachran had taken a knock just prior to the interval and he was replaced by Louis Thompson, as the Dons looked to stem Argyle’s tempo with a period of prolonged possession.

The outstanding Ennis was soon back to the fore, bursting brilliantly down the right and drilling a low cross toward Jephcott, who was thwarted by a challenge from Darling, although there was a very strong shout for handball as the big defender lay on the floor.

Good feet from Fornah solved a problem in midfield for Argyle and there was a definite lift in tempo from the Greens. The Pilgrims then turned to the bench for fresh impetus, introducing Ryan Hardie for Jephcott.

More sterling work from Ennis won the Greens a free-kick on the left, quickly taken to Mayor for a weaving run and shot that was saved low at his near post by Fisher. Grant then found room for a cross that was skewed goalward by Edwards without seriously troubling the home custodian.

Argyle would not be denied and the leveller was a fantastic strike, with Camara and Hardie working the ball to Grant in the centre of the pitch 25 yards from goal. The magical left-foot was pulled back and unleashed for a superb goal, rifled in off the post and no chance for Fisher.

The strike was truly something special and rich reward for a tremendous start to the second period from Argyle, a point emphasised by the Dons responding with a triple change, removing Jerome, Laird and Andrew Surman for Ben Gladwin, Will Grigg and Daniel Harvie.

Excellent defending by Jerome Opoku denied Sorinola picking out his man after finding space on the right and the resultant corner led to a Grigg shot blocked by Cooper. In general though, the platform for Argyle’s improved display was admirable diligence in midfield from Camara and Fornah.

A tremendous interception by Aimson repelled a dangerous cross from the right wing on 72 minutes and Argyle were soon back in the ascendancy, working the ball wide to Grant for a delivery headed clear under pressure by Darling.

The quality and graft of Ennis continued to be a major influence for the Greens, but there was also still a threat at the other end, as Cooper stretched to punch clear another menacing cross from Harvie.

Lewis replaced Fornah in Argyle’s next change and the new man introduced himself to the game with a superb tackle on the rampaging Darling, who was about to pull the trigger from 22 yards.

Sam Woods and Byron Moore replaced Kelland Watts and the exhausted Ennis for the final few minutes, but it was the tired legs of Aimson that produced a fine challenge on Grigg after a sweeping Sorinola cross.

A cruel blow struck the shattered Greens two minutes before the end, when Edwards was penalised for a handball and Fraser just about converted the spot-kick, despite Cooper coming painfully close to making the save.

Seven minutes of stoppage time did provide some semblance of hope but the Pilgrims were understandably exhausted after so many games in a short space of time, plus countless hours on the team bus.

There was very little left in the tank but, while the result hurts, the performance was hugely encouraging for the weekend visit of Bristol Rovers.