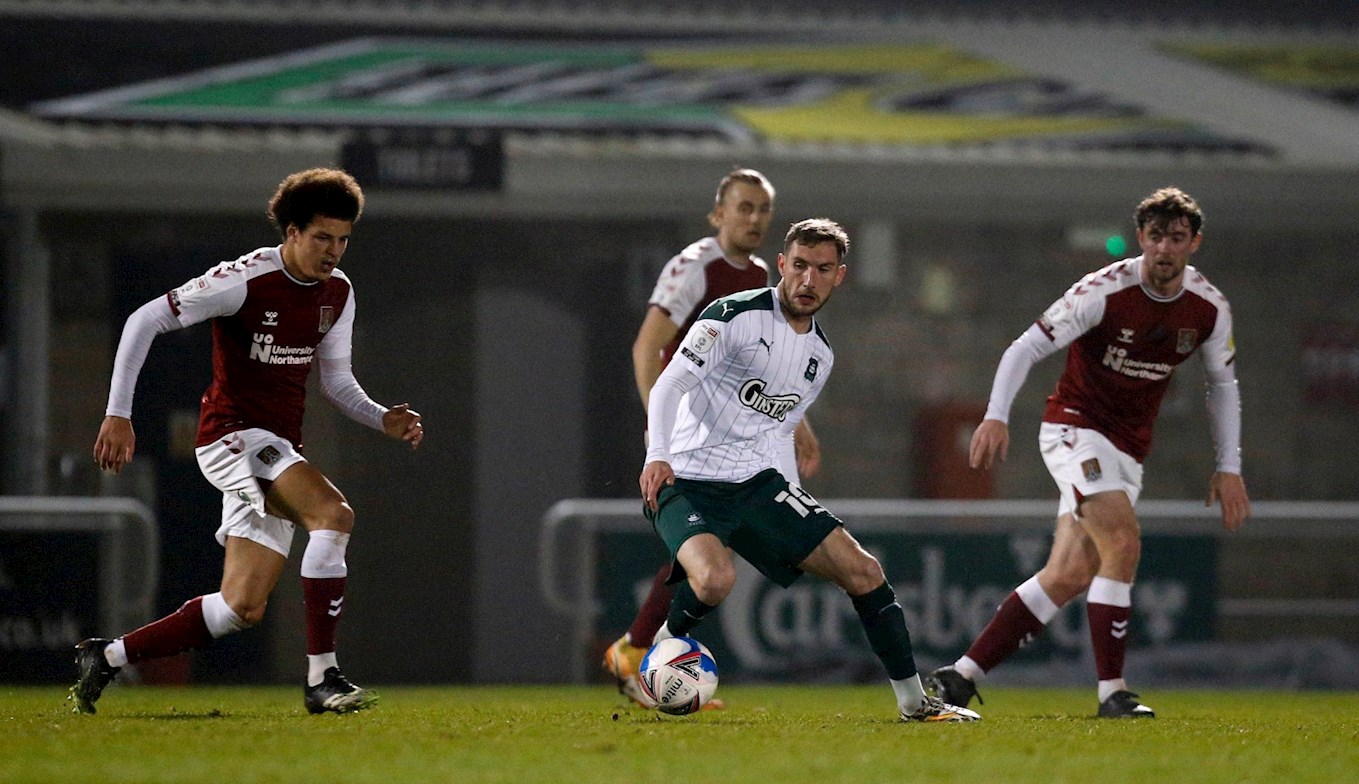 Argyle suffered one of those nights when nothing went their way in going down to a 2-0 defeat at Northampton Town.

Despite looking in control for much of the first period, the Pilgrims fell behind to a well-struck goal from Ryan Watson shortly before half-time.

The Greens laboured hard after the break but came up against a side desperate to hold their advantage, and Watson added a second from a corner. Sam Woods finished the evening with a last-minute dismissal for the frustrated Pilgrims.

Argyle manager Ryan Lowe made three changes from the thrilling weekend win over Lincoln City, with Woods replacing the injured Jerome Opoku in defence, while Conor Grant and Niall Ennis were given a break from the relentless schedule to be replaced by Panutche Camara and Luke Jephcott. There was also a welcome return to the bench for Lewis Macleod.

Jephcott and Ryan Hardie very nearly found the same wavelength in the opening three minutes, as a clever flick nearly released the Argyle number nine for a run on goal. At the other end, Woods enjoyed a couple of confidence-boosting interventions on his full debut for the Greens.

Argyle goalkeeper Mike Cooper displayed his alertness to race off the line and clear a searching pass through the middle intended for the run of Ryan Edmondson, but the early exchanges were generally a story of aerial ping pong.

When the Pilgrims injected some pace into their attacking work, Jephcott flicked the ball to Hardie, who fed it wide to Joe Edwards. The skipper returned the pass back along the edge of the box for Danny Mayor to attempt a shot that was charged down by the Cobblers.

A cross from Hardie was then cleared in scruffy fashion by the hosts, as Argyle looked to build some sustained pressure. Northampton responded with a low cross from Mickel Miller that required diligent defending from Kelland Watts.

In a flash, Argyle were back in the Northampton penalty area, and Hardie slipped an intelligent pass into the path of Jephcott, who drilled his shot goalwards and forced a fine save from Jonathan Mitchell.

The Greens were controlling possession in the opening quarter but Northampton did manage to work a nice move in the right channel, and Cooper did well to punch clear a cross to the near post from Miller.

Successive crosses from the left by Mayor and Adam Lewis had the hosts stretched, and Edwards fizzed his low shot on the loose ball into the arms of Mitchell after the aerial pass had narrowly missed the head of Jephcott.

Another delightful Pilgrim move started with Tyrese Fornah feeding a pass into the front man and the fluidity of positions created room for Camara to float over a cross headed clear by former Green Lloyd Jones.

In defensive areas, the trio of Watts, Woods and Will Aimson were happy to deal with a spell of attempted long balls from the hosts, while the attacking unit continued to probe with increasing menace against a stretched Northampton backline.

When the Cobblers did find a yard in the Argyle box, Miller caught a looping ricochet perfectly on the volley and Cooper displayed strong wrists in turning the effort wide of the post.

Unfortunately, the Argyle custodian had no chance from the next attempt, as a free-kick punt fell to Watson on edge of the area and he lashed a super low drive in off the post five minutes before the interval.

It was a frustrating outcome in a first period largely controlled by Argyle and Mayor nearly remedied the problem with a cross to the near post for Jephcott. Horsfall managed to find a clearance that ensured a half-time lead for the home side.

Argyle restarted with more assured possession, moving the ball quickly in their search for an opening. The patient approach was forcing Northampton into a lot of running, a strategy that would hopefully reap the reward of tiring legs later in the game.

A succession of free-kicks conceded by the hosts was an early demonstration of the concern in home ranks but the challenge for Argyle was to find that clear-cut opportunity for the likes of Jephcott and Hardie.

A set-piece on the right flank gave Lewis the chance to curl in a dangerous cross and Jones was a full stretch in heading clear. The ball was eventually shifted to the opposite flank, where Lewis had returned for a fizzing low cross that was inches away from near-post run of Jephcott.

Good defending from Woods repelled a rare foray at the opposite end but Argyle were soon back in the attack after a superb break from Edwards, released by Camara, and the final cross by Lewis, again, was headed away by Jones, again.

From nowhere, a corner presented Watson with his second goal on 65 minutes, as two headers looped around in the box and the Northampton midfielder reacted quickest to volley past the exposed Cooper from close range.

It was yet another goal against the run of play but the reality was a two-goal deficit heading into the final quarter and Lowe opted to make four changes, withdrawing Hardie, Edwards, Lewis and Camara for Grant, Ennis, Byron Moore and Ben Reeves.

Northampton introduced Danny Rose for Miller, as the hosts continued to work extremely hard in disrupting the Pilgrim rhythm. Argyle were throwing balls into the box but the lucky bounce or bobble refused to find a Green shirt.

The Cobblers were happily camped in their own half and Klaidi Lolos in place of Fornah was the final attacking switch for the Greens in the closing ten minutes. Northampton, meanwhile, introduced Ricky Korboa for Ryan Edmondson.

Argyle threw Watts forward as a bonus striker for the final stages and a clever pass from Lolos gave Moore room to fire in a cross, but Jones was in the right place to clear.

A rough night for the Greens had one last frustrating moment, as Woods was shown a red card for a mis-timed lunge, and Argyle must move on quickly to Doncaster on the weekend.