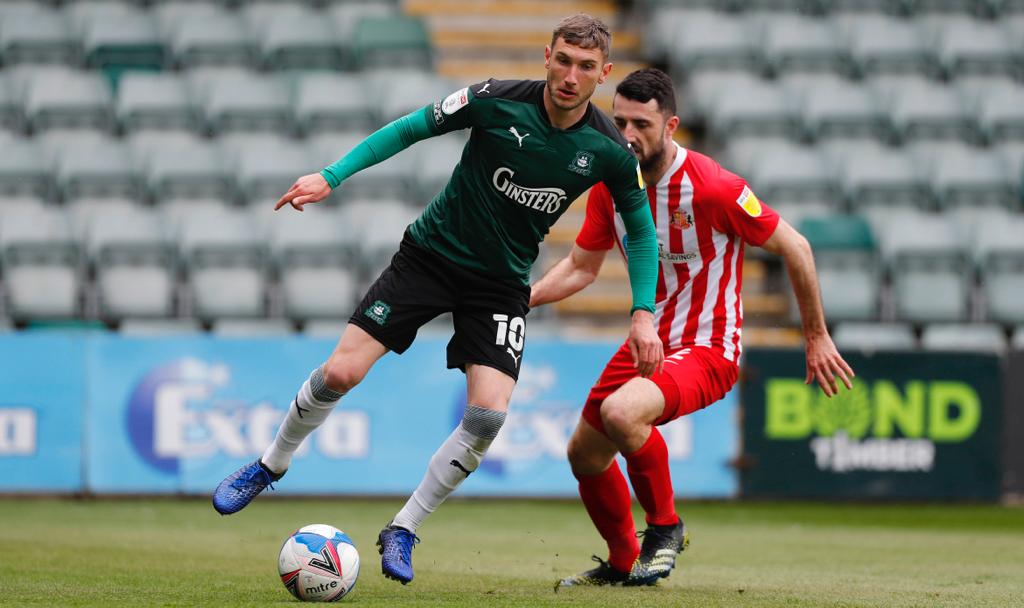 Argyle completed their home campaign in the Sky Bet League One season with a 3-1 defeat to Sunderland and a tale of two penalties, one given, one waved away, and both decisions dubious.

The Greens were denied a strong shout for a foul on Joe Edwards with 20 minutes on the clock and Sunderland were in front seconds later, with Ross Stewart finishing neatly from a tight angle. Edwards restored parity on the hour but the Pilgrim cause was almost instantly damaged by Jerome Opoku seeing red for two bookable offences.

The Pilgrims stayed resolute until six minutes from time, when Ryan Law committed a foul two yards outside the box and yet, bizarrely, the Black Cats were awarded a penalty, dispatched by substitute Chris Maguire. Denver Hume rubbed late salt in the wound with a third in stoppage time.

Law and Tyrese Fornah both got started with strong tackles to thwart Sunderland in dangerous areas, while a deflected shot from Jones was safely gobbled up by goalkeeper Mike Cooper. Argyle’s attacking instincts began to flow with great feet from Panutche Camara and a teasing Law cross was taken on the bounce by visiting custodian Lee Burge.

Brilliant work from Niall Ennis then conjured room for Hardie, who attempted a quick shot with his left foot but it lacked the venom to trouble Burge. The Greens continued their confident start with clever work between Danny Mayor and Camara allowing Edwards to make a dart in the right channel, a dart stopped by a lunge from Hume and a genuine penalty shout ignored by the referee.

Moments later, the decision had a double impact, as a hooked ball down the line from McLaughlin found Stewart for a clear run into the box, and he slid a cool finish beyond the advancing Cooper to find the far corner.

Argyle responded with great strength from Law leading to a clipped cross by Hardie and when the visitors failed to clear, Ennis took a swipe at the ball but was unable to make the proper connection from a good position.

A strong foot by Opoku repelled a threat from Lynden Gooch and the same Black Cat next unleashed a fierce drive from 22 yards, prompting an excellent save from Cooper to parry clear. Sunderland then attempted a clever corner routine, laying the ball to the edge of the box for Max Power to stroke his side-footer narrowly wide.

Argyle ended the half with a barrage of crosses and the final delivery from Camara found Mayor for a drilled low half-volley, expertly saved by Burge, followed by a Gooch effort clipping the outside of the post after a swift counter.

A booking for Lowe at half-time possibly confirmed the manager’s understandable frustration that the penalty claim for Edwards was waved away. Argyle settled into their second-half work with some quality passing across midfield and good play on the fringes of the Sunderland penalty area, without seriously penetrating the visiting defence to create a genuine chance.

The probing continued down the left and Grant dinked over a lovely cross for the run of newly-named Player of the Season Edwards to nod home a deserved equaliser for the Pilgrims. Klaidi Lolos came on for Hardie in the aftermath but Argyle’s improving mood immediately took a downturn with a red card for Opoku.

Maguire almost made it worse with a curled effort against the bar from the subsequent free-kick, as the Greens filled an Opoku-shaped hole at the back with youngster Ollie Tomlinson making his league debut.

Tomlinson slotted in beautifully to head clear a dangerous cross, although it was the bar that saved Argyle when Stewart nodded a fine effort from Jones’s cross, quickly followed by a super save from Cooper denying Maguire.

The Black Cats naturally tried to make their numerical advantage count but the Greens were standing strong in their protection job, with Camara and Fornah both helping out to quell problems in the box, only for the visitors were then rewarded an extremely soft penalty.

There was no doubt Law had fouled Gooch but the contact was 100% outside the box, and the decision only made after consultation with an assistant referee, who was surely close enough to have a clear picture of the incident.

It was very harsh on Law but no arguments with the actual spot-kick, confidently rifled into the top corner by Maguire. Lowe then removed Fornah for Ben Reeves and Cooper was replaced by Luke McCormick to give a Pilgrim legend the final five minutes of Argyle’s home campaign.

McCormick quickly rolled back the years with a super save and was very unlucky to see the rebound fall perfectly for Hume to steer an easy finish into the empty net.

It was an unwarranted final outcome for Argyle but we all look forward to a new season, hopefully inside a Home Park packed with our magnificent Green Army.