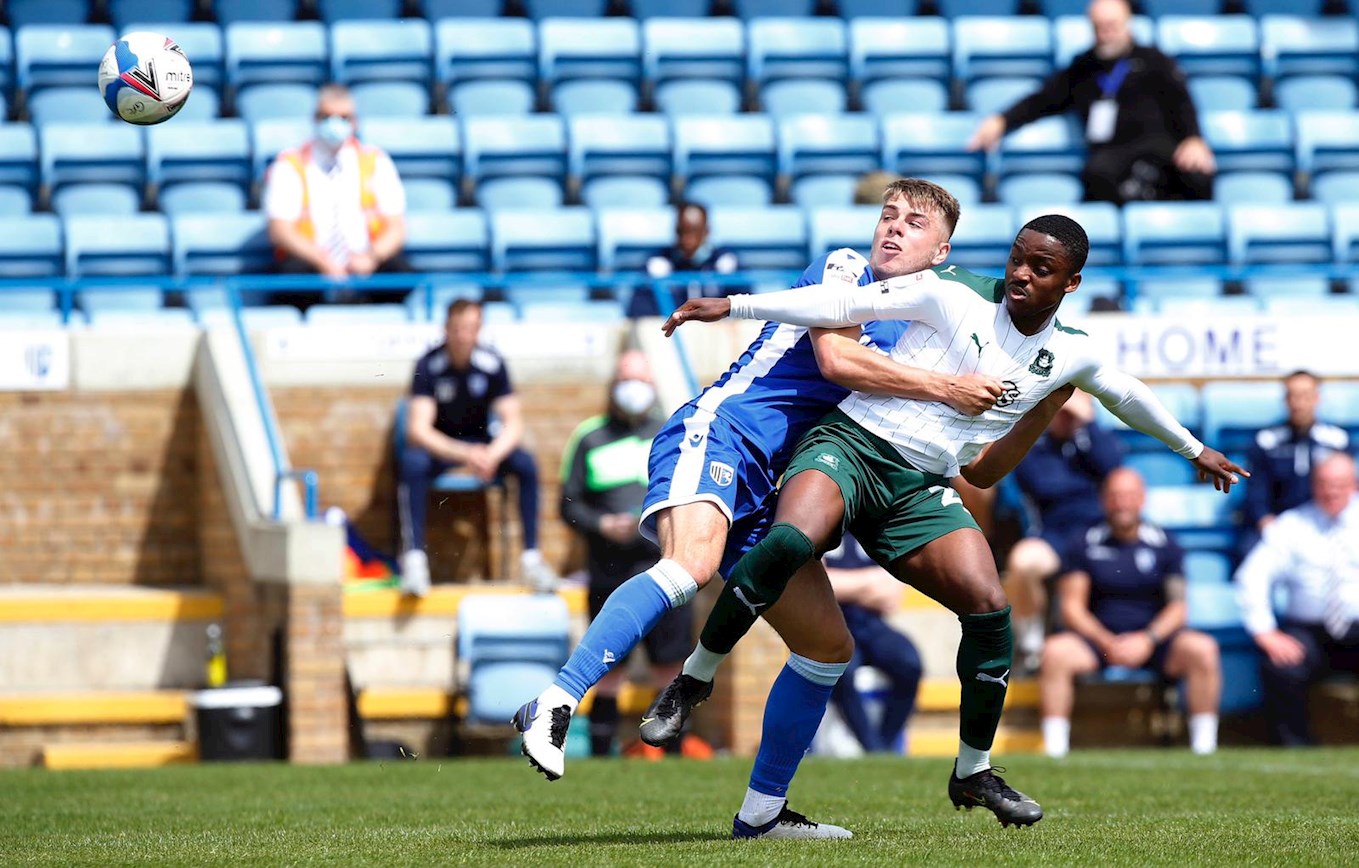 Argyle signed off their first season back in Sky Bet League One with a narrow defeat to Gillingham at MEMS Priestfield Stadium.

The Greens enjoyed plenty of the ball on a blustery warm day in Kent, but were unable to carve out a clear-cut opportunity to cancel out Vadaine Oliver’s 28th minute header.

In truth, though, there had only been around 15 minutes of action before the Gills’ top scorer found the net, with Newcastle United loanee Kelland Watts suffering what appeared to be a serious injury with the game barely kicked-off.

A fairly innocuous looking aerial clash with Oliver on the half-way line left the centre-back prone on the Priestfield turf, with physio Dave Galley, alongside medics from the home club, taking extreme care to give Watts oxygen, before placing him on a stretcher.

Kell’s replacement from the bench, Byron Moore, nearly made an instant impact, latching onto a loose defensive pass in the Gills’ third to fire with fury at goal, but home stopper Jack Bonham got down well to repel the effort.

The injury to Watts saw an already youthful Argyle back line become even less experienced, with midfielder Tyrese Fornah forming a makeshift partnership with full league debutant Ollie Tomlinson to face up against a physical Gills front line.

For the most part, the Pilgrims’ defence dealt very well with the threat posed by the hosts, and the Greens nearly took the lead when Ben Reeves’ 20-yard free-kick was deflected over the crossbar.

Moments later, though, the Gills were in front, as Rob McKenzie’s cross was helped towards the far post, where Oliver ghosted in to notch his 20th of the season.

Argyle mounted an immediate response through captain Joe Edwards, who worked his way into shooting range before pulling off target under pressure.

The Greens continued to press, and, save for a long-range Kyle Dempsey effort, dominated the remainder of the first half, with a series of free-kicks coming and going on the edge of the hosts’ box.

The Gills began the second half strongly, and a superb reaction stop from Mike Cooper denied the hosts a crucial second, as former Pilgrim Olly Lee reacted quickest in the box to prod a defensive rebound towards the far post.

Argyle enjoyed their best spell of the game in response, as Ryan Hardie showed good industry and composure to leave his man behind in the left channel and pull back for strike partner Niall Ennis, whose goal-bound effort was blocked.

Moments later, Danny Mayor cut inside from the left and whipped in a dangerous cross for the arriving Edwards – his effort was forced clear by Bonham, but only as far as Moore, who feinted to put the ‘keeper on the deck, before firing wide of the near post with the goalkeeper stranded.

With time running out, good work from substitute Klaidi Lolos down the right cranked the Gills’ defensive line open once more, and his driven cross into the box looked to fall kindly for fellow substitute Luke Jephcott, but the Welsh marksman could not get the ball under control in a crowded area and the opportunity slipped by.

With the game entering its final few minutes, Argyle manager Ryan Lowe made two further substitutes, introducing players at either end of their professional careers. Goalkeeper Luke McCormick replaced Mike Cooper for his 350th Argyle appearance, while scholar Finley Craske, fresh from winning the under-18 Merit League one day earlier, made his league debut.

Roll on next season, it's not been the same without you.