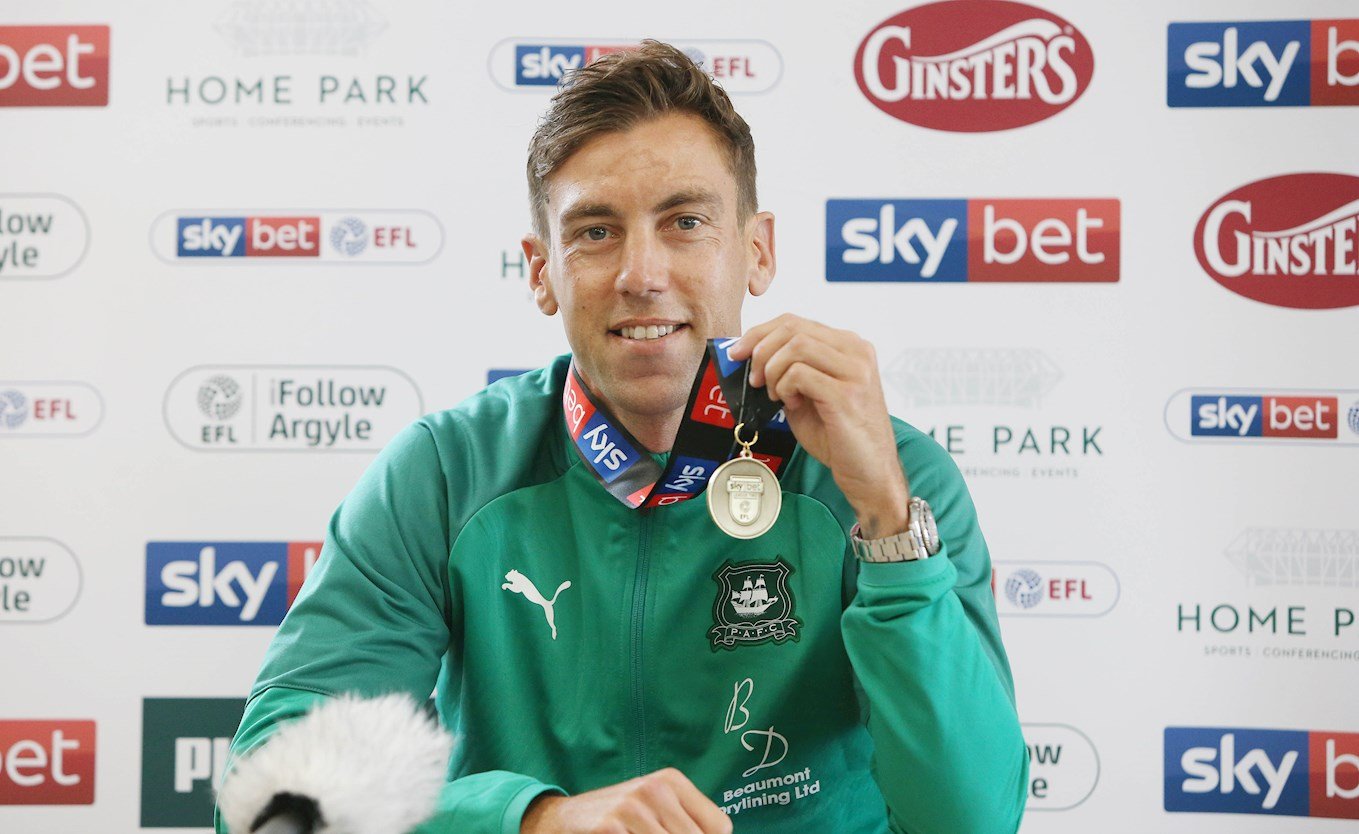 Club captain Gary Sawyer has been forced to retire from football.

Upon expiry of his contract in the summer, the two-time Argyle promotion winner will take up a new non-playing role at Home Park as a club ambassador, which includes elements of coaching in the Pilgrims’ new-look and ambitious Academy set-up, outreach work with the Argyle Community Trust, and specific club duties both on matchdays and throughout the week.

‘Gaz’, who turns 36 in July, suffered a freak ankle injury during the Greens’ 3-2 defeat to Norwich City in the Papa John’s Trophy back in September, and has been unable to return to action since – with his surgeon advising him to retire from playing, or risk life-changing, long-term damage to his ankle.

He said: “I knew it was bad. As soon as I did it, I looked at my foot because it felt like it was facing the other way. It’s the most severe injury I’ve suffered in my career.

“We made the decision with the surgeon; we took his advice. Unfortunately, for me to get back to the level that I would need to compete at professional football, I just won’t be able to make that grade anymore.

“I’ve tried and done everything I could possibly do with the physio staff to get back to that level, but my ankle just won’t take it anymore.”

The development brings to an end a two-decade long professional playing career – the majority spent at Home Park. Having come up through the club’s Academy system, spending time on-loan at Weymouth and - whisper it quietly - Exeter City, Sawyer made his Argyle debut in a Coca-Cola Championship win over Colchester United at Layer Road in 2006.

The U’s would present Gaz with another career milestone again soon after, with Sawyer notching his first competitive goal in a 4-1 Championship victory at Home Park in March 2008.

Gaz joined Bristol City in 2010 on loan, before moving across the city to join Bristol Rovers on a permanent deal that summer. After two years with Rovers, the defender joined Leyton Orient, before self-initiating a return to Home Park in 2015.

Sawyer, who will finish his Argyle playing career on 298 appearances, said: “I had got to a point in my career where I just wanted to be back in Plymouth – I’d felt it for years before, but it was really serious that I wanted to do that. I know, like anyone in football, if you sit there and wait for things to happen, they never seem to happen. It was something that I wanted to do for my career.”

With his playing days drawing to a close, Sawyer was approached by the club’s hierarchy to discuss the possibility of extending his association with Argyle to a new role – which he was quick to accept.

He said: “The gaffer [Ryan Lowe], Andrew Parkinson and Neil Dewsnip spoke to me and saw where my head was lying with it. I’d always said that it would be perfect to roll from playing football to working at the football club – I feel like I have a lot to offer the football club having been through every rung of it.

“It was something that I was really interested in, and that’s what makes having to retire easier – it gives me a new focus, new drive, and I get to work for the club I’ve supported and played for.

“I’ll go into an ambassador role for the club, that will be really interesting – it keeps me around the boys and the fans. I like being involved in those sorts of things, and I always felt that would be the ideal job for me – knowing what the club means to people, it means the same to me.”

Sawyer’s career at Home Park has taken in a number of highs, including two promotions, a trip to Wembley, appearances at Championship level and multiple seasons as club captain. His stand-out memory, though, is the 6-1 victory over Newport County in April 2017, confirming the Greens’ promotion to Sky Bet League One – an achievement he would repeat two seasons later.

“When we played Newport on that Monday, the whistle blows and everyone comes running on the pitch – it’s just this amazing feeling.

“I’ve never felt anything like that – all the sacrifices to get to that point, it just makes everything worth it. That would be the biggest stand-out moment for me.”

Reflecting on those joyous scenes, Sawyer admits that it is a wrench not to have had his send-off in front of the Green Army – but he will now place his focus into driving the club forward off the pitch, as he did on it.

He said: “In an ideal world, I would’ve loved us to have got promoted and played my last game in front of everyone in the stand. Unfortunately, it doesn’t always work like that.

“This isn’t the way I’d want to do it – especially with no fans in the ground and I can’t say goodbye, but I have to look forward, being given the opportunity to work in the club.

“The fans are the reason I wanted to sign back at the football club. We’re so well supported and it’s such a great place to be. Fans have always been amazing with me, on and off the pitch. I could never ask for more from them, and I’ll miss having that.

“I’ve had an amazing and long career. I’m 36 in July. I haven’t left anything out there – I’ve tried to achieve everything I could achieve. It’s hard when someone tells you that you can’t do your dream job anymore. I’m gutted, it does hurt, but it’s important I make the right decision.”