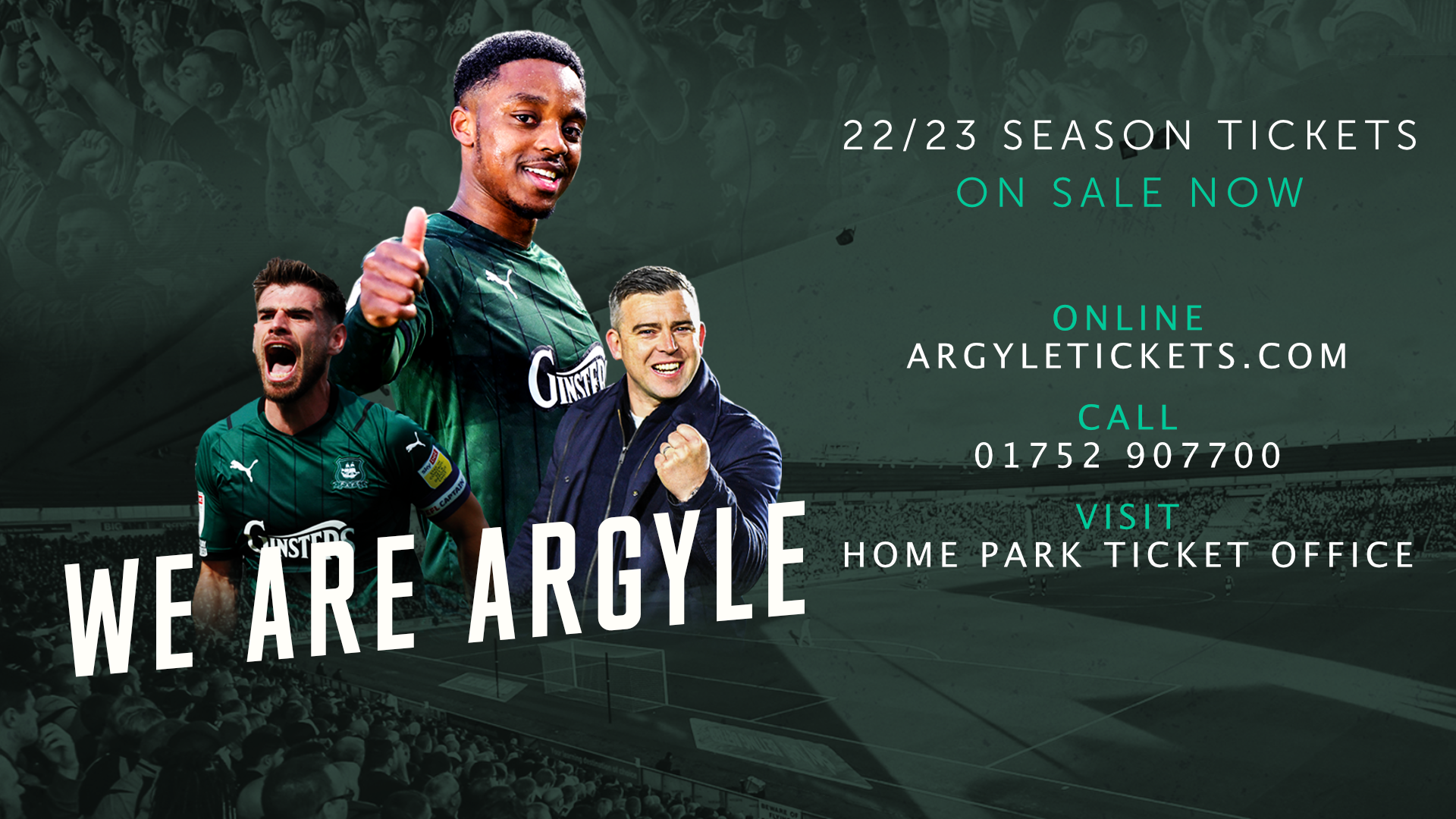 Season tickets for the Pilgrims’ 22/23 EFL campaign will be available online only from 10am on Friday 22 April.

With attendances at their highest levels since 2007 – when Argyle were fighting it out in the Championship – and a quarter of all home league fixtures sold out in 21/22, there has never been a better time to secure your seat early and reap the benefits of Early Bird discount.

Adult season tickets in the Devonport End, Lyndhurst Road Stand or Upper Mayflower Grandstand will cost £425 if purchased during the Early Bird window – with a guaranteed price for all Early Bird purchasers, even if Steven Schumacher’s side secure a return to the second tier for the first time since 2010. The Early Bird window will run for a month, closing on Friday, 20 May.

Meanwhile, prices have been frozen for the youngest members of the Green Army for the fifth successive season, ensuring that the next generation of Argyle fan can continue to build their connection with their club as cheaply as possible. By applying this pricing model, Argyle becomes the number one destination for families and young people, and helps us achieve our goal of building a strong fanbase for generations to come.

In addition, a more cost-effective season ticket option remains in place in the lower Mayflower Grandstand, with an adult paying less than £13.50 per match.

The adult price represents a £30 increase on the Early Bird prices offered in 21/22 (£22 in the Lower Mayflower Grandstand), which equates to a little over £1.30 per game.

The club’s mission is to become a sustainable Championship club. As a result of a tremendous collective effort from everyone associated with Argyle – including the Board of Directors, staff, players, and supporters – the club is well-placed to achieve those goals – all while offering a best-ever match-day experience for fans in the stadium, and the guarantee that club staff will continue to be receptive to feedback and make improvements on a rolling basis.

However, we are not there yet. The club is not yet self-sustaining, and we are not yet in the Championship. As such, a marginal increase in season ticket pricing will not only help further improve the stadium facilities and match day experience at Home Park, but also, crucially, enhance the budget for our football department – allowing our talented coaching staff to continue to recruit and retain the quality of player and character that we are all proud to support.

Argyle Chief Executive Officer Andrew Parkinson said: “Whatever happens between now and the end of the season – the 21/22 Sky Bet League One season has been incredible, and we thank you for your brilliant support of Argyle.

“Whichever division the 22/23 campaign is played in, we will continue to work tirelessly to build on the strong foundations now in place – with a focus on bringing through the best local talent from our Academy, playing with dedication and a clear philosophy.

“Our exceptional coaching staff, using a data-led recruitment model and first-class day-to-day coaching and preparation, have proven that they are capable of getting the very best out of the resources available, as evidenced by this season’s performance. However, the gap in playing budgets between some of the highest spending clubs in our division and ourselves is still significant.

“By purchasing a season ticket at a fractionally higher price than in previous seasons, you enable us to arm Neil Dewsnip, Steven Schumacher and the rest of the first-team staff with a budget that is more competitive, giving us an even better chance of building on the successes of this season, without risking Argyle’s long-term health.

“Argyle is more than just results on the pitch, though. The club serves a huge geographical catchment in Devon and Cornwall, as well as a large number of supporters scattered across the country. Everything we do is motivated by making our supporters proud and representing our community.

“The club is in a fantastic place – thanks in no small part to the superb contribution and commitment of our supporters – but there is much work to be done, and we must maintain our progress together if we want to achieve our goal of financial sustainability in the
Championship.

“We are all motivated by building the very best version of Argyle possible, and united in achieving that ambition.”

Season tickets will be available to purchase through argyletickets.com from Friday, 22 April at 10am, and in person at the Home Park Ticket Office, or by calling 01752 907700 from Monday, 25 April at 10am.

From Monday, 25 April, the Home Park Ticket Office will be open between 9am-3pm Monday to Friday, and 10am-2pm on Saturdays, to process renewals and new purchases.

Four- and 10-month finance options are available for 22/23 season tickets, with Argyle partnering with V12 Retail Finance to deliver an integrated finance solution for our supporters.

Going online is the most efficient method to renew or purchase a new season ticket, though we understand that this is not possible in some cases. As such, we encourage supporters to purchase online wherever possible, ensuring that our Ticket Office staff can support those who need assistance most.