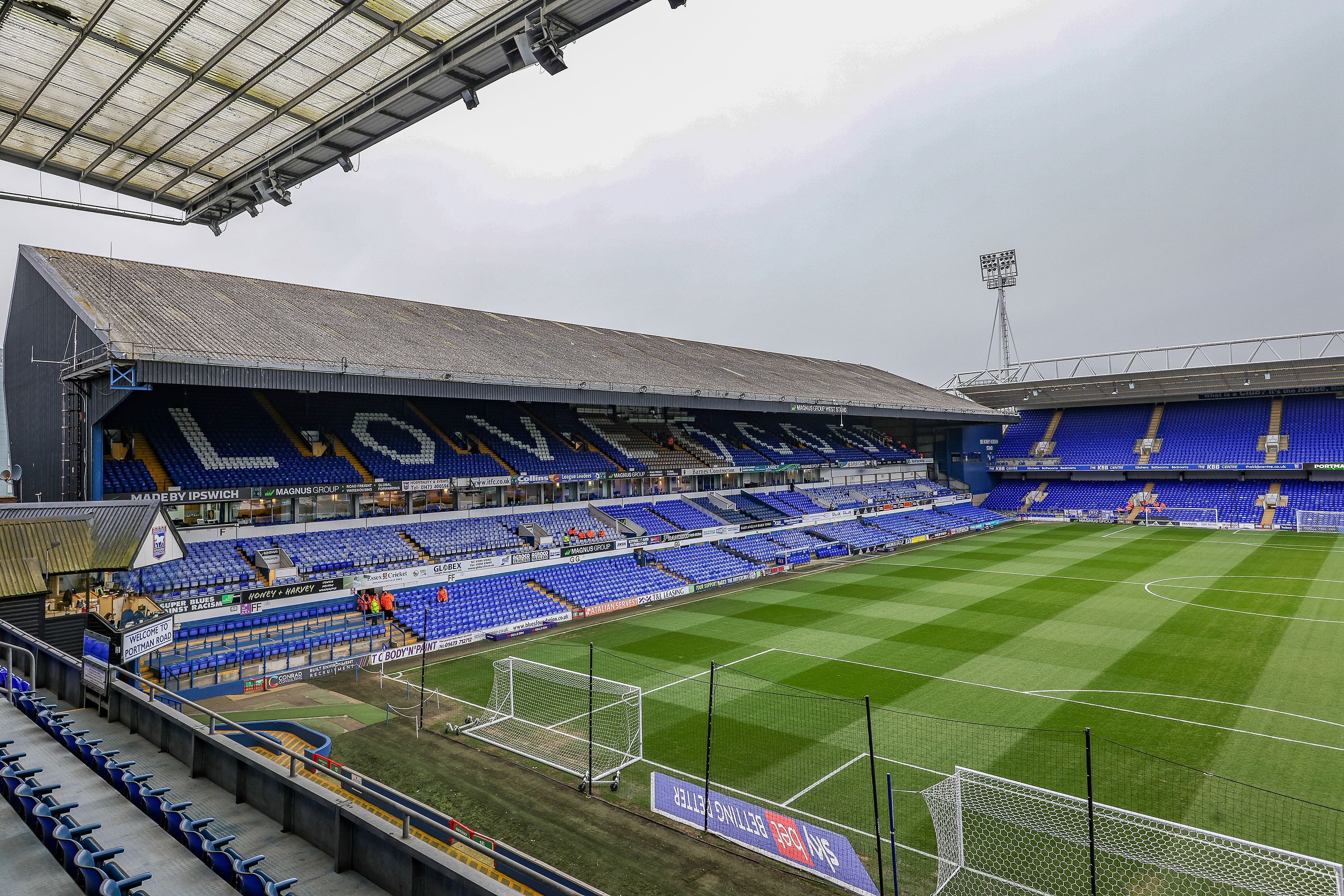 Enjoying a club-record run of six consecutive victories without conceding a goal, Steven Schumacher's Pilgrims travel to Portman Road for a stern test against a vastly-improved Ipswich Town outfit.

Similar to Argyle, Ipswich are under the stewardship of a promising young manager in Kieran McKenna, and the Northern Irishman has led Town to the periphery of the play-off pack, with no defeat in their last 10.

The fixture holds significance in the Sky Bet League One play off race, but also significance off the field, too, as Portman Road will play tribute to Paul Mariner, considered an all-time great of both clubs, with a pre-match display.

Heading to East Anglia on Saturday to cheer the Greens on? Read on for our fans' guide to Ipswich Town.

Away fans' guide to Portman Road

This game is an all-ticket fixture, and tickets are no longer on sale.

We strongly advise supporters who do not hold tickets not to travel to Portman Road.

The stadium is just a short, 5-10 minute, walk to the town centre, with shops, cafes and restaurants. The waterfront area is around a 15-minute walk from the ground, with a yachting marina and a range of cafes and restaurants. Note that the only pub that officially welcomes away fans is the Station Hotel (details below). Many pubs and bars in the town centre are strictly home fans only (more info below), whilst others are more relaxed – this does vary from match to match though. Just beyond the town centre, 15 minutes’ walk from the ground, is the beautiful Christchurch Park, with a renowned art gallery within the Tudor mansion building.

Getting to Portman Road

Prepare yourself for a very long journey if you are driving to Ipswich! The address is Portman Road, Ipswich, IP1 2DA.

Join the M25 clockwise at junction 2 (via Heathrow). At junction 28 of the M25 use the left lane to join the A12 towards Chelmsford.

Follow the A12 to outskirts of Ipswich and pick up the last few miles route below.

Whichever way you go, it is likely to take at least five to six hours depending on travel conditions. Unless you live very close to Suffolk, we generally recommend allowing at least an hour, and ideally 90 minutes, beyond the AA/Google/Sat Nav suggested journey time.

For those without Sat Nav, once you reach the junction of the A12 and A14, just south of Ipswich, take the A1214 (London Road) for a couple of miles into town. As you approach the town centre area, there is a Sainsbury’s supermarket on the left – at this point, go straight on past Sainsbury’s and then almost immediately right onto West End Road. Take the first left (after about half a mile) onto Sir Alf Ramsey Way and you’ve arrived.

Note that the roads immediately behind the Cobbold and Sir Bobby Robson stands are closed about 90 minutes before the game, so to access the NCP car park on Portman Road you will need to continue on London Road, straight on to Handford Road and then turn right at a set of traffic lights onto Portman Road (if you miss the turning, just do a u-turn at the roundabout with Civic Drive, turning back onto Handford Road, then taking the first left into Portman Road).

There is no official stadium car park, but there is parking all around the ground.

The town centre is less than 10 minutes’ walk, and has numerous car parks, as you’d expect. Being a town centre ground, most streets are controlled (residents only) parking, so free on-road parking tends to be at least a 20-minute walk away. As usual, the car parks nearest the ground are a bit slow to clear after the game – the further you park from the ground, the less likely you are to face lengthy traffic delays post-match.

One good option is the railway station car park (it’s controlled by cameras, and the pay stations are by the entrance to the station – it costs £6 all day at weekends) - exit left onto Burrell Road/Ranelagh Road (B1075), then (after about a mile) left onto the A1214 to get out to the A14.

Five car parking spaces are available for visiting disabled supporters. Spaces can be booked by contacting Ipswich Town's Disability Liaison Officer, Lee Smith, on 01473 400556. There is no charge for this parking but note that the spaces are on the opposite side of the stadium to the away turnstiles.

Note, there is an alternative route via Bristol, taking the A38/M5/M4/M25/A12. This is a fair bit further, and usually takes about half an hour longer, but some people do prefer to be on dual carriageways the whole of the journey.

Sat Navs vary in their recommended route into town, but whichever way you go, it shouldn’t take more than 15 minutes from the A12 to the ground.

Away coaches usually park in the West End Road car park, 5 - 10 minutes’ walk from the ground.

The Station Hotel (away fans pub – see below) is just a couple of minutes away – go towards the bridge over the river, at the east end of the car park, turn right and you’ll find the pub the other side of the river, right opposite the railway station.

Note that a number of rail companies, including Great Western and Greater Anglia, are operating amended services at the moment with timetables changing on a frequent basis. As such, online timetables may not reflect the actual services being offered. Please check your planned journey shortly before you travel, and be prepared to be flexible over timings.

Also please note that there are planned engineering works on the Ipswich to London route on the day of the match with buses replacing trains between Newbury Park and Colchester. This adds significant time to the journey with travel time from Plymouth to Ipswich between 6 hours 45 minutes and 7 hours 15 minutes.

For those travelling by train, Ipswich station is only 5 to 10 minutes’ walk from the ground.

The route from Plymouth is via London Paddington. With the planned engineering works on the London to Ipswich line, from London Paddington you will need to get to Newbury Park which is on the Central Line. Take the Bakerloo Line to Oxford Circus and change to the Central Line. At Newbury Park you board a bus to Colchester to pick up a train to Ipswich.

There is planned strike action on the Central Line every Friday and Saturday night between 20:30 and 04:29 the following morning. www.tfl.gov.uk suggests that there will be a service expected on the Central line (but warns there may only be only two trains per hour through central London). Please bear this in mind if you are travelling after 20:30 on the Central Line.

It is not possible to get back to Plymouth on the day of the game, post match, by rail alone.

Action on the Central Line which will impact your journey from Newbury Park after 20:00 (i.e. all trains from Ipswich from 18:11 onwards).

On Sunday there are options back to Plymouth with the rail replacement buses again in place between Colchester and Newbury Park. The last train is shown on www.greateranglia.co.uk at 16:41 which will get you back to Plymouth at 23:35. If you are attending the Women’s match and are looking to catch this train, note that you will not be able to get a train from Felixstowe to Ipswich to connect with it.

Whatever your travel plans, you should check www.greateranglia.co.uk or your usual train operator website for updated times.

There are ticket checks on all mainline trains and ticket barriers at Ipswich.

The Station Hotel (formerly the Riverside Hotel) is opposite the station, and is the official away pub. It has a garden and TV screens, and up to four beers on pump, mostly from the Greene King stable.

Most pubs immediately around the ground are for home fans only, and few pubs around the town, if any, will welcome groups of away fans, especially wearing away team colours. As always, couples, families and older people will find it a bit easier to slip into a town centre pub for a quiet beer or two. Note that, on a match-by-match basis, police may designate other pubs in the town centre as home fans only. This is more likely nowadays as there have been a number of pub closures in the immediate area around the stadium. In practice, the smaller and the friendlier the away following, the easier it is to enjoy our many great pubs on a matchday.

There is a FanZone marquee and entertainment zone at the stadium, but this is strictly open to home fans only. There are ticket checks at the door.

The nearest cash machines to the stadium are a 5-10 minute walk away, (a) at the railway station, (b) at the Cardinal Park leisure facility (which has a number of chain restaurants, plus a KFC and a McDonalds), and (c) throughout the town centre.

The 68-page matchday programme, priced at £3.50, can be purchased outside the stadium from the blue, tardis-like kiosks. Programmes are not for sale inside the ground.

As at most away grounds, you can expect to be searched prior to entering the ground. Ipswich Town also uses a trained search dog and some stewards now wear body cameras.

Large bags will not be permitted to be taken into the stadium. By way of guidance, nothing larger

than a standard carrier bag will be allowed. There are no facilities to leave bags.

Portman Road is a traditional ground, with four separate stands. The away end is blocks V1 and V2 of the Cobbold Stand. This gives you a good side-stand upper-tier view of the action, though it is an older stand, celebrating its 50th birthday this season.

Ambulant disabled fans, who require limited stepped access, will be seated within block S of the lower tier of the Cobbold Stand – this is an away fans block. Accessible toilets are on the concourse of the lower tier. Ambulant disabled supporters wishing to sit in the upper tier can do so but please note that there is no lift access or accessible toilet facility in this area.

As we do not have wheelchair spaces in the Cobbold Stand, wheelchair users are located with home fans in the Magnus Group West Stand. Four spaces are available.

Note that all kiosks are cashless. Card and contactless will be accepted.

Food and drink facilities are what you’d expect (pies, burgers, confectionery, etc). Alcohol availability in the away end is determined on a match-by-match basis. Food and drink (alcohol if available) prices are as follows:

Portman Road is a no smoking stadium. This includes e-cigarettes. Anyone found smoking will be ejected from the ground. For anyone considering leaving the stadium, note that no re-admission to the ground is permitted.

Subject to space, flags and banners are allowed in the away end. These will need to be fire certificated. For questions relating to this contact Mick Warden on mick.warden@itfc.co.uk.

Musical instruments and selfie sticks are not allowed in the away end.

As with all grounds and to comply with legislation, the use of pyrotechnics or even trying to get them into the stadium is a criminal offence and will not be tolerated.

Pushchairs are not allowed into the stadium. No storage is available so they will need to be left in your car.