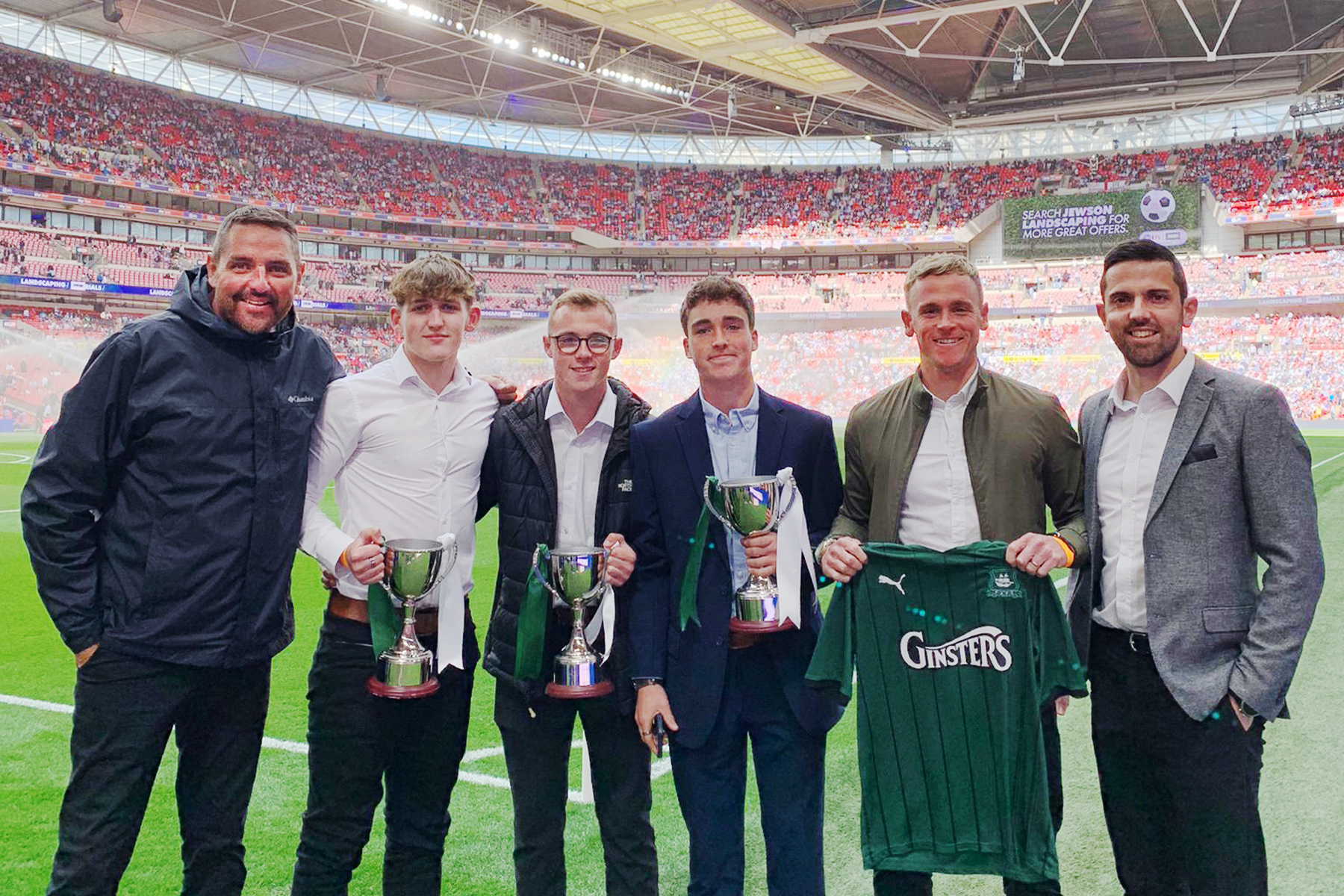 Students from the Argyle Community Trust’s Football Development and Education Programme at Carn Brea in Cornwall enjoyed a whirlwind day at Wembley at the end of May.

The Programme’s teams swept the board by winning all three of the EFL’s South West Community & Education Football Alliance (CEFA) leagues this season and were rewarded was a trip to the Championship play-off final between Nottingham Forest and Huddersfield Town.

48 students and staff from the first, second and third teams left Carn Brea at 5am on Sunday, 29 May for the trip up to London, where they joined the capacity crowd for ‘the richest game in world football’.

They were welcomed to the Club Wembley Suite where the three teams were presented with their medals and trophies alongside clubs from all over England, including the likes of Chelsea. After lunch, they took their VIP seats on the halfway line to enjoy the big game.

Half time brought one of the highlights of the day, as the three team captains and coaches made their way down to the hallowed Wembley turf where they posed for photographs with the trophies in front of more than 80,000 fans.

First team captain, James Swan, whose side were unbeaten over the season with eight wins and two draws, reflected on the day, saying: “Winning the league was great, but to celebrate that by going to watch the Championship play-off final from some of the best seats in the stadium was a huge bonus. It was a long day – starting at 5am and getting home at 2am the next morning - but being from Cornwall, we’re used to travelling.

"The fact that the second and third teams also won their leagues made the occasion even better as we were all able to go and be part of the day together. Being on the Wembley pitch is one of those things I’ll never forget.”

Second Team Captain, Ben Payne, succinctly summed a campaign that saw them win every one of their matches: “The invincible season! Unforgettable. The work ethic, desire and quality shone through week-in, week-out.  It felt surreal to be presented with our trophy at Wembley and there was no better way to be congratulated for all the hard work we’ve put in this season.”

Meanwhile the third team had a big fight to win their division, coming home as champions by a single point. Captain Sam Le Bas said: “Not a lot of people get the chance to go to Wembley, let alone being on the pitch with all their close friends to celebrate a league-winning side. So we were all thrilled to be invited for a once-in-a-lifetime opportunity to celebrate our success in front of thousands of people. “

As all good champions do, though, the boys aren’t resting on their laurels and are already looking forward to defending their titles next season.

Ben Payne said: “Of course we will be the team to beat next year. The boys know what it’s like to not drop a point and we’ll do everything we can to replicate it next season.”

James Swan agreed: “I feel like whenever we play in the league now, every other team will want to beat us. Our reputation means that if they did, it would be one of their best results of the year. We just need to take it game-by-game, showing the talent we have down here in Cornwall so we can win the league and go back to Wembley again!

James also has his eyes on another prize next year, saying: “If I could change one thing from last season it would have been to progress further in the National Cup. We’ll 100% be going for that cup next season.”

With that attitude, no wonder Jamie Day, First Team Coach and Cornwall Head of Football and Tutor in the Post-16 Football Education programme at Carn Brea, is upbeat about next season.

“The first years are staying on, of course and while 10-15 second years will be leaving to go to university and to other challenges, we have around 16 staying on for the third year programme which we started last September.

"In partnership with the Cornwall College Group, we now offer our Cornwall-based scholars the opportunity to enrol for a third year and gain additional industry-recognised qualifications that are highly regarded and will significantly assist learners as they transition into higher education or employment.”

Dates for those sessions will be announced shortly, but in the meantime, potential students can get in touch with mike.foley@pafc.co.uk for more information.