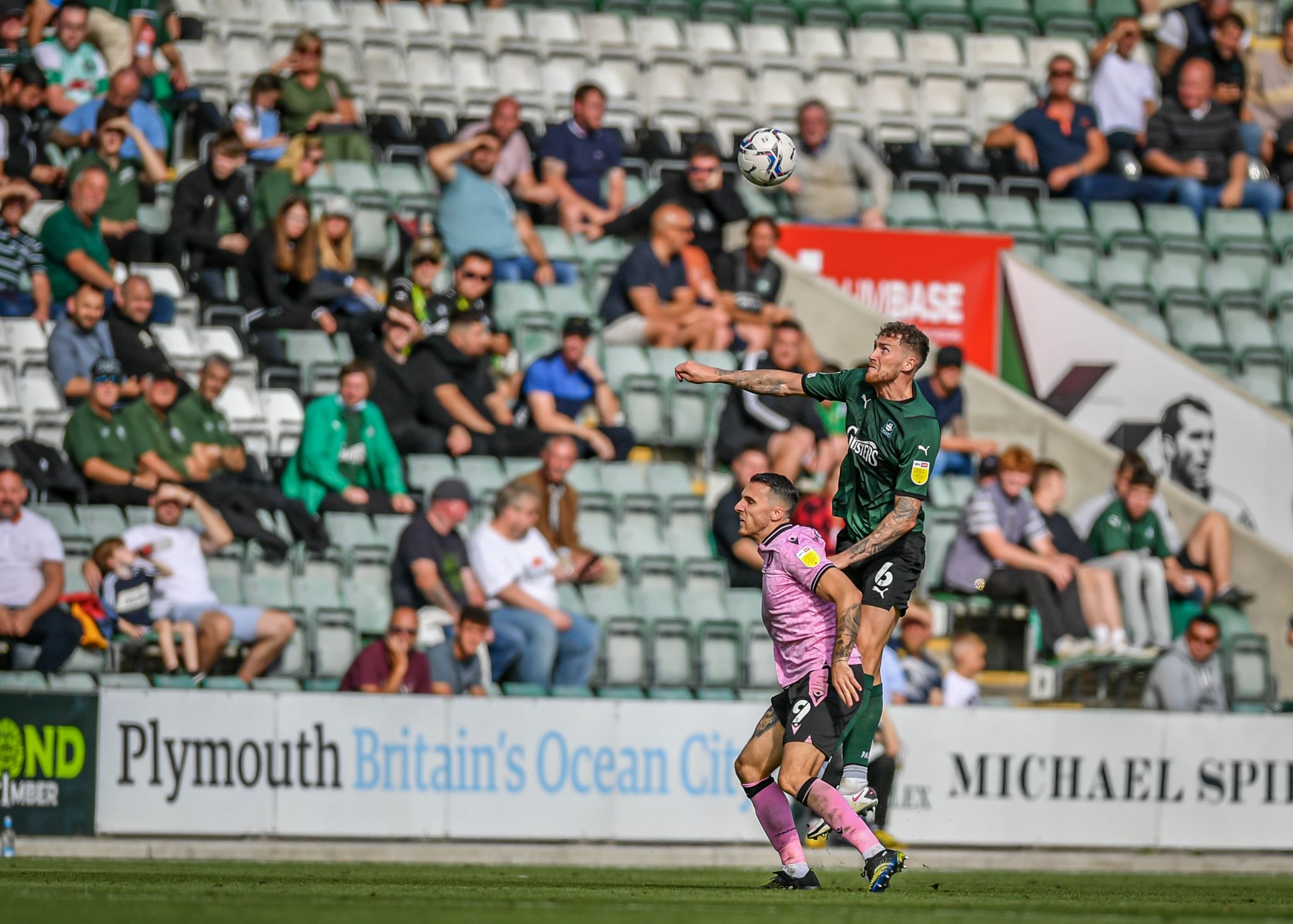 Argyle have kept three clean sheets from the opening six games of the Sky Bet League One campaign and have the joint second-best defensive record in the division.

One of the reasons for that has been the form of Dan Scarr, with Argyle’s new number six settling into life at Home Park very nicely.

“To get the big crowds in and to play in games like Saturday are some of the reasons why I came down here.”

The Birmingham born central defender has started all of the Greens league games so far and was named man of the match for the 3-0 win over Sheffield Wednesday last weekend.

A goal, a clean sheet and a dominant performance against one of the title contenders is not bad for an afternoon’s work.

He said, “We just need to stay grounded and work hard but it’s nice to get the recognition. I still feel we have more to give, and I try to take every game as it comes.”

Having played the majority of his five-year professional career in the midlands, a move to Devon seems like quite a big step.

The early part of Dan’s career was in the local non-league in the Birmingham area and then spells at Birmingham City and Walsall followed for the 6’4 defender.

“There weren’t really any doubts at all,” he said on the move to the South West. “I hadn’t really been away from home, but I wanted to get out of my comfort zone.

“There aren’t really any distractions, you can just go and play your football. When something feels right for you everything falls into place you have to go for it and so far that’s seems to be the case here.”

Family is clearly a big part of Dan’s life; he’s brought his dog down to Plymouth and lives in the city.

Although he has made the journey away from home, he still keeps in touch with his nearest and dearest.

“My mum and dad, as soon as they heard it was going to be a move here, they bought a caravan in Bigbury. Everything is quite easy, and they come to every home game now as well.”

Argyle’s defensive solidity is a far cry from last season and so far, the early indications seem to be of a much tighter unit.

That could be down to a number of things. The players are more experienced this season, they have played more games and at a higher level. But Dan feels that the form of the side and the defence in particular, can be put down to the fact that there is healthy competition between the players.

He said, “We all work incredibly hard, and we do a lot with the coaches on the defensive work. Our job is to keep clean sheets and keep the opposition out and I feel we have done alright so far.

“There is competition there and we gee eachother on to do well. If someone does something good in training, even if they’re on the other team, we’ll always shout out and say, ‘well done.’

“We meet up and go for food, go for a coffee down by the water, it’s great. We are always spurring eachother on and wanting the best for each other.”

The Pilgrims travel to AFC Wimbledon on Saturday, and it will be another tough test for the Argyle defence.

Wimbledon have scored 15 goals from their seven league matches and put four past Morecambe last weekend.

Dan firmly believes that the quality that Argyle have in their squad and the willingness to learn and get better, will make The Greens a tough opponent for anyone.

“There are some really experienced players here and the coaches here are really good, so I just want to keep learning and try to get better myself.

“You can learn off everyone in the team. We get on really well off the pitch, we are very pally and it’s such a good atmosphere.”