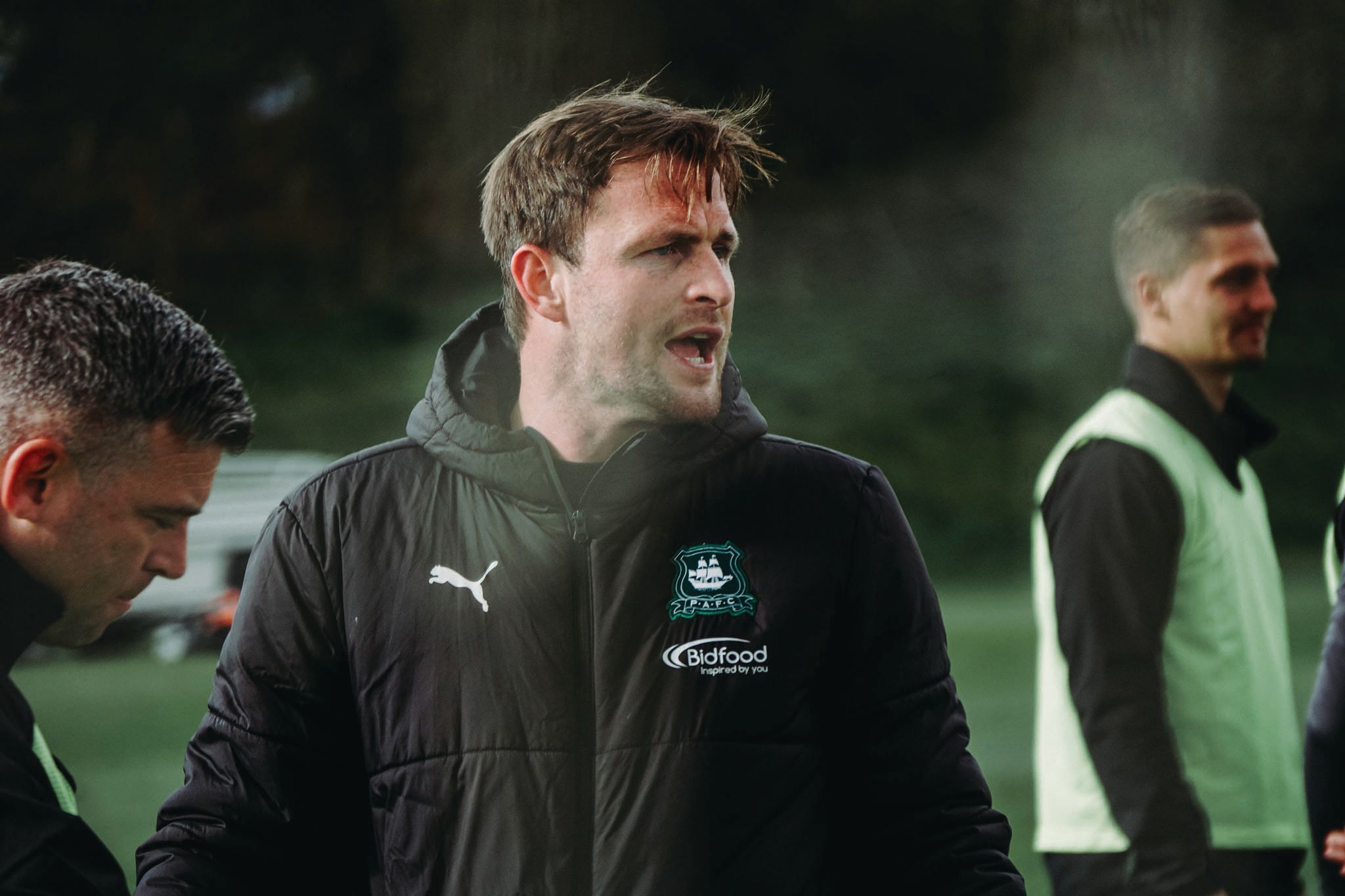 In an all-encompassing restructure of the first team backroom staff, Mark Hughes has been appointed the club’s new Assistant Manager and Jimmy Dickinson will become Head of Recruitment for Argyle.

The changes are all part of the development of the first team coaching department, highlighted by the introduction of the Head of Recruitment role, and is evidence of the way the club is looking to strengthen and grow.

Mark’s appointment, as the number two, is a clear statement of the confidence the club has in young and exciting coaches.

With Steven Schumacher being in his first management role, it is evident Argyle are committed to developing young, forward thinking coaches. Mark has shown, in his short time at the club, that he has the the credentials.

He joined the club in January, less than a month after retiring from playing, and brought a different perspective to the coaching team.

His eye to detail and tactical knowledge, coupled with the fact he has only recently finished playing has given him a fresh take on player development. He has added another dimension to the team and he was an integral part of the Greens’ form in the second half of the season.

The former Accrington Stanley and Bristol Rovers man is a good friend of Schumacher’s and is a hugely respected young coach.

He is currently studying for his UEFA A licence and is on course to graduate next season.

He will continue to support Steven and work closely with first team coaches, Kevin Nancekivell and Darren Behcet in the training of the first team.

On being appointed Assistant Manager, Mark said, “First of all, I would like to thank the manager and the club giving me more responsibility in a job I am looking forward to so much.

“I have a long way to go in my coaching career, but this is the perfect club to help me with my journey.

“The players, coaching staff and supporters have helped me settle into the area and get over the transition from playing to coaching.

“It’s a proper football club and one I’ve felt like I have been at for more time than I actually have.

“I am looking forward to doing my upmost to get the club to next level. We were so close last year and that gives me so much hunger to go one better.

“I love working and learning from Steven, he is a great friend but also a top young manager. “Let’s get this chapter started.”

While Steven Schumacher said, “I am really pleased to have Mark as my new assistant.

“The long-term plan was always for Mark to become my number two, but with Keith Downing choosing to move on now, the time has come for him to step up sooner.

“I believe Mark is more than ready for this opportunity and added responsibility. He has been at the club for six months now and he has become a really valuable member of the coaching staff, and learning from Keith and Nance in these early stages of his coaching career will have prepared him to be ready for this next step.”

Jimmy Dickinson’s appointment to the Head of Recruitment role is an expansion to the football backroom staff and is an evolution towards the way in which Argyle wants to carry out its business.

Having joined the Greens, in the summer of 2019, Jimmy has been a key figure in the on-field progress, working closely with the first team management and players as the Lead Performance Analyst.

He will now move into a new role primarily responsible for identifying and monitoring potential first team targets.

Under the leadership of Chairman Simon Hallett, Chief Executive Officer Andrew Parkinson, and the club’s Board of Directors, the use of data has become an integral part of operations at Argyle.

As well as the introduction of the Head of Recruitment role, the Greens will also be appointing a Head of Football Data, with the intention of improving and evolving the club’s use of statistics and data to provide a competitive edge across all areas of football performance.

One of those will be the transfer policy and, in his new role, Dickinson will liaise closely with the club’s partner, MRKT Insights, in building a transfer strategy and identifying the right targets to improve the first team in future transfers.

He will work closely with Director of Football Neil Dewsnip and will be responsible for the direction of the scouting team across the country.

On his new role, Jimmy said: “It’s a big opportunity for me and something I’m really looking forward to.

“It’s an area I’ve been extremely interested in for a long time and using my data and analytics background, I believe I can really grow the department.

“I’ve worked with the Gaffer for a long time now and we have developed a strong working relationship.

“I’d like to thank the Gaffer, Neil, Simon, Andrew and all the board for giving me this opportunity and I cannot wait to get started.”

With Jimmy moving into his new role, Sam Morcom will move into the Lead Performance Analysis role.

Having graduated from Plymouth Marjon University, Morcom spent the successful 21/22 Sky Bet League One working underneath Dickinson, alongside work towards an MSc in Performance and Analysis.

Morcom will now be responsible for helping first team staff put together game plans for fixtures and will lead a small team which includes Harry Powell, who has progressed from a similar role in the Pilgrims' Academy to first-team duties.

On making the move to Lead Performance Analyst, Sam said: “I am delighted and really excited to step up to a new challenge.

“I have worked under Jimmy for the past three seasons, and I’d like to thank him for his endless support and guidance since I’ve been with the club - I am grateful to have learnt so much from him.

“Representing my hometown club in such a role is an honour - I’m looking forward to continuing the momentum from last season with a special group of staff, players, and people that we have at the football club.”

While Director of Football Neil Dewsnip said: “These changes further show the development of Argyle as a forward-thinking football club and hopefully support the development of the team towards our goal of becoming a Championship side in the seasons ahead."