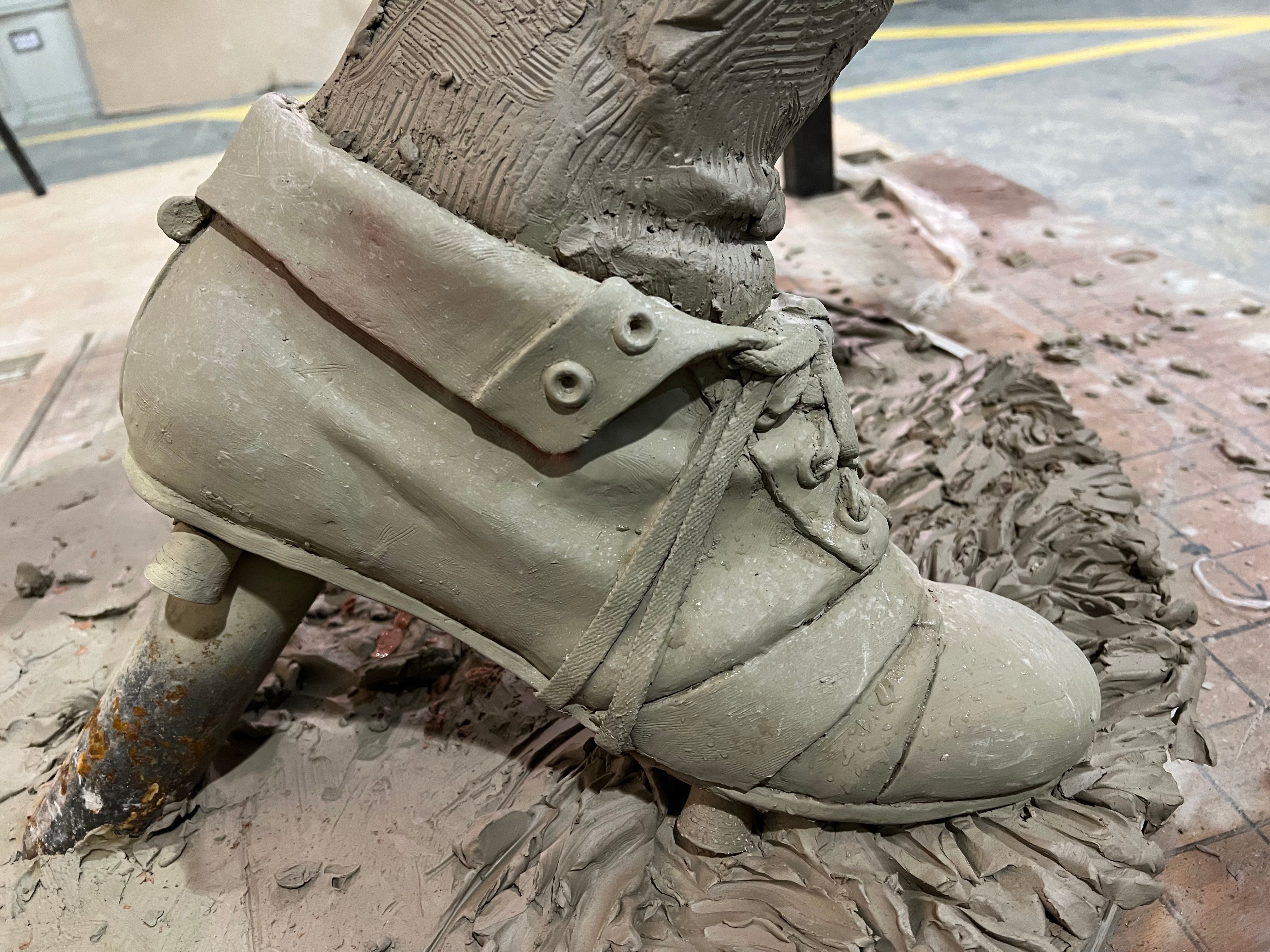 After an incredible fundraising effort, the Jack Leslie Campaign is in the final stages of delivering its key objective: a bronze statue of this pioneering footballer outside Home Park.

Born in East London, Jack Leslie signed for Argyle in 1921 and scored 137 goals in 400 appearances before injury forced his retirement in 1934. Lauded as a true Argyle legend, he is now known as the first Black footballer to be selected for England in 1925, but his place was denied before the game took place due to the colour of his skin.

Leslie’s three granddaughters, Lyn, Gill and Lesley, who have supported the effort from the very start, were recently able to see the work at sculptor Andy Edwards’ studio.

It was an emotional moment for them. They said: “It’s fantastic. We can’t believe the likeness and Andy has truly captured the essence of granddad. You can see that sparkle in his eyes, that wonderful smile that he had. It’s so much more than looking at a picture. His emotions come through in the sculpture. It’s incredible. It may have taken a hundred years, but he will now be known for the great goal scorer that he was.”

Andy Edwards is a renowned sculptor who has created many of the country's top sporting works. These include the Stanley Matthews monument at Stoke City, Liverpool’s Bob Paisley and Emlyn Hughes statue, and the recent Sir Alex Ferguson statue at Aberdeen.

He has been working on this statue for nearly a year, researching and working on scale models. Now he’s putting the final touches on the one and a quarter life-size sculpture of Jack Leslie.

Andy said: “Statues have to stand in for their subject, so we have to make sure to get everything right. Not just the detail, but the character has to come over too.

"For fans, they will never have been able to walk around an image of Jack before, but for his family, I know this is very emotional. When they visited my workshop recently, it was emotional for me too, and I don't know which of us was more, but the first thing they said was, 'We want to hug him'.

"All three girls carry their granddad's likeness here and there, and I added refinements and detail directly from their faces. The next time we meet will be in Plymouth when Jack makes his triumphant return to Home Park. I can't even dare to imagine what that will be like. I just hope we've done him proud."

The full-size clay sculpture will soon be moulded and then cast in bronze using the centuries-old lost-wax process at one of the UK’s leading foundries, Castle Fine Arts in Liverpool. It will then be installed atop a stone plinth in the corner where the Lyndhurst Road Stand meets the Devonport End.

Campaign co-founders Greg Foxsmith and Matt Tiller said: "We are incredibly excited to announce our unveiling plans as this is the culmination of a huge effort. Thousands of football fans from Argyle’s faithful Green Army to the other clubs Jack was associated with, West Ham and Barking, and many more across the nation and globe have made this happen. We are so grateful to them and can’t wait to see the monument revealed. It will stand as a fitting tribute to Jack Leslie the player and tell the story of the injustice of 1925.”

The Sky Bet League One fixture list comes out on 23 June. Once the fixture list is confirmed, a date will be chosen for the unveiling and released to supporters and the wider public as soon as possible.

Argyle have fully supported the project from the outset, and Chief Executive Officer, Andrew Parkinson, said, “We are delighted to see the Jack Leslie Campaign press forward, and we are really looking forward to seeing the statue of an Argyle great take pride of place at Home Park.

"Congratulations to everyone who has made it possible – including a huge number of Argyle fans who contributed to the fundraising effort. As well as telling an important story, Jack’s statue will look fantastic alongside other stadium improvement works taking place in the seasons ahead.”

Many individuals and businesses have contributed, and the campaign welcomes further donations. They will be used to create a legacy fund for the maintenance of the statue and help continue spreading the story of Jack Leslie far and wide.

Contributions continue to be open via the campaign's Crowdfunder site. Click here to donate.

And The Jack Leslie Campaign is also keen to hear from businesses and individuals that would like to get involved. Please contact the Campaign for more information: jacklesliecampaign@gmail.com