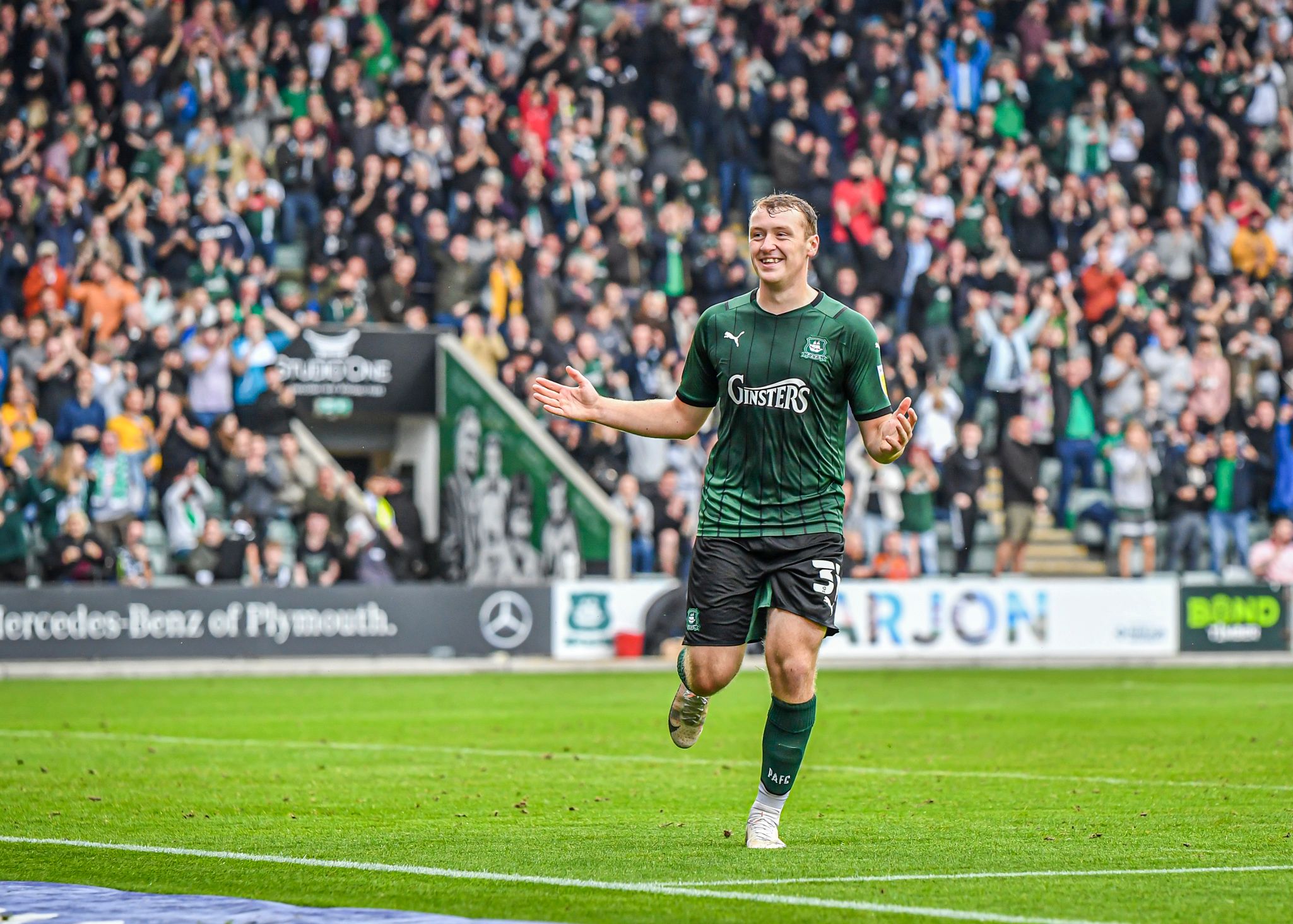 The old football cliché goes ‘goalscoring is an artform’ and if that is to be taken literally, then Luke Jephcott is an artist.

With five goals from the opening 13 games of the season, he is once again underlining his credentials as one of the most prolific goal scorers in Sky Bet League One.

The Wales under-21 international scored in four games, back-to-back, in August and then netted from the spot in the Greens’ 2-1 win over Doncaster Rovers in September.

His 30 goals for the Pilgrims have come in just 83 matches and so it would seem that putting the ball in the net is something that is totally natural to Luke, but that is not necessarily the case.

“When I was younger, I used to be a centre back,” Luke revealed before heading off to training.

“But I got tired of that and wanted to start scoring goals,” he added, “When you’re young it was more about playing the game and enjoying it and I enjoy scoring goals.”

It’s lucky then that Luke is also pretty good at scoring goals as well.

Having finished last season as the club’s top goal scorer with 18, it didn’t take long for Luke to get back to doing what he does best at the start of this campaign.

He scored the winner in Argyle’s first home match of the season against Gillingham and then found himself on the score sheet just three days later against Cambridge United.

He said, “Before the gaffer came in, I didn’t have much training on learning where to be but with the gaffer being a striker, he has worked with all of us on our movement and making sure we are in the right places.

“The service from teammates is also pretty important as well, I have to just make sure I’m in the right place and they will find me.

“We have quality players throughout the squad and they always seem to deliver.

“Obviously when we then get into those positions it is down to us to make sure we score.”

At 21, Luke is still very much in the infancy of his career and despite this relative inexperience he seems confident in the way he plays.

“It I wouldn’t say I look up to anyone in terms of how I want to play. I just want to play like myself,” he said.

“In the squad, we all have different qualities and skills that we can bring to the table. Ryan has his pace, Niall’s acceleration is a joke, Kieran has experience and Rhys has his pace.”

It’s the understanding and link up play between the strikers, particularly Luke and Ryan Hardie, that has enabled Argyle to be one of the top scorers in the division.

They seem to complement each other’s games and appear to have a unique understanding of how each other plays.

“When he first came in two or three seasons ago, we just got on straight away,” Luke said.

“We share rooms on away trips, live across the road from each other so we’ve got a pretty good understanding of each other.

“It isn’t just with Ryan though, all of us strikers have a pretty good understanding with each other, and it seems to be benefitting the team.”

With Argyle currently sitting top of the Sky Bet League One table and playing with a confidence that is clear to see, there is a feel-good factor around the club.

Whether it be amongst the fans, the staff or the players, everyone has a smile on their face when they talk about the club at the moment.

And Luke is keen to keep everyone happy and the best way of doing that, is to keep on winning.

He said, “We’ve got off to a good start and we’ve been confident in every game we’ve played.

“It is still very early days, and we have to keep concentrated and doing what we’re doing.

“We put the work in, have the right information from the coaches and long may that continue.”