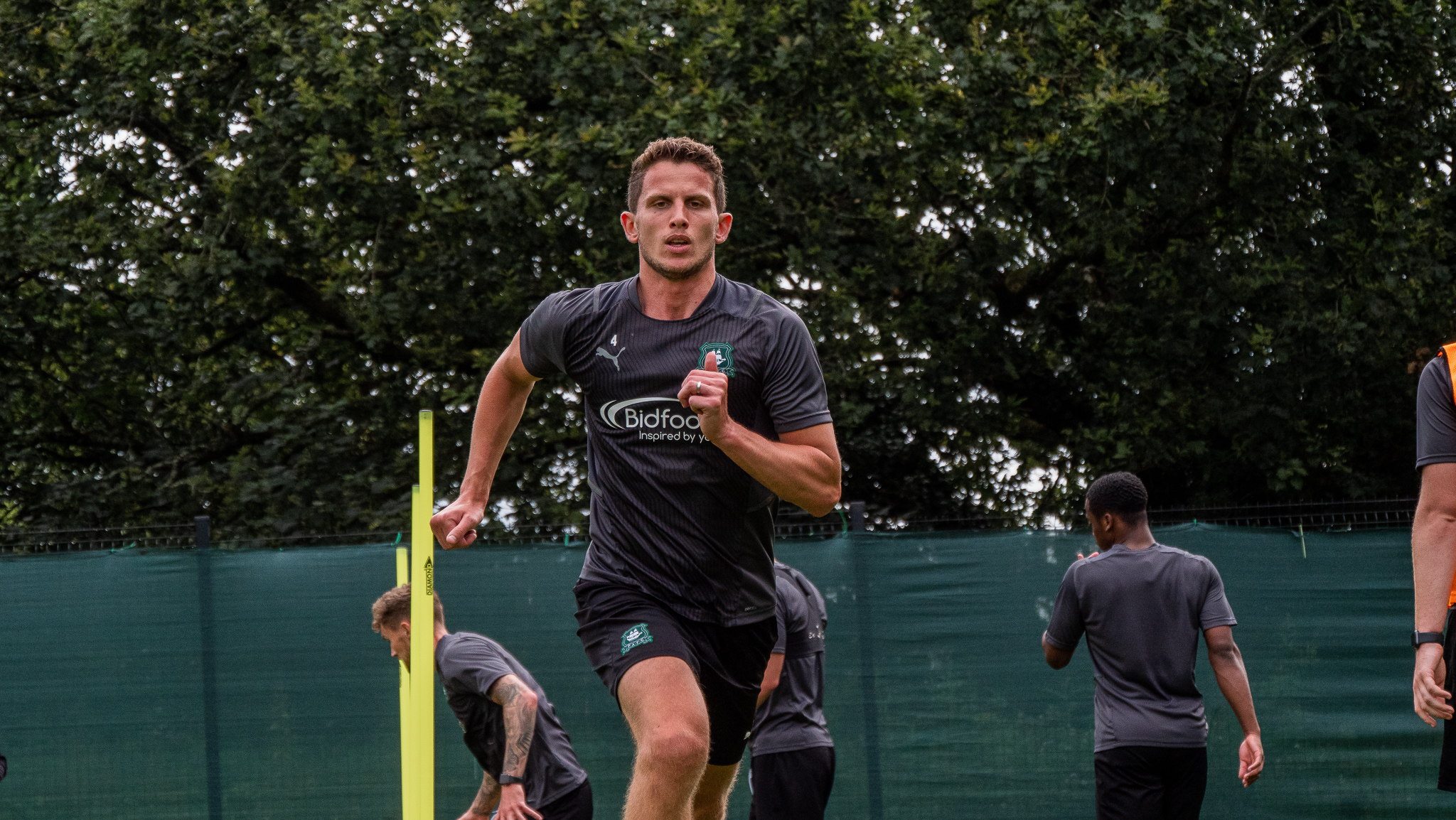 Jordan looking to end season on a high

As excitement builds for the final four games of Argyle’s season within the fan base, the enthusiasm is also rubbing off on the playing staff as well.

Jordan Houghton is someone who knows just how impressive the Green Army are, having spent the second half of the 2015/16 season as a Pilgrim.

He was part of a squad of players who played in front of 30,000 at Wembley in the Sky Bet League Two play off final, but even he is blown away by the support this season.

“It’s huge,” he said as he spoke to the press on the day tickets went on sale for the Milton Keynes game at Home Park.

“I spoke about it when I came here in the summer and in a lot of interviews since.

“The backing they give us is that extra incentive to keep going and I think they’ve been a massive part in what we have done this season.”

He was speaking ahead of the Greens’ Sky Bet League one fixture with Wycombe Wanderers on Easter Friday which, incidentally, is a sell out in the away end.

But he couldn’t believe the amount of people stood outside the ticket office hoping to get tickets for a game almost three weeks away.

“It’s good for the lads and the staff to drive past that,” he said.

“Our car park is just outside, and we need to drive past the ticket office and see them all queueing.”

The reason for the excitement and enthusiasm within the fan base is, of course, down to the fact that the side are within touching distance of, at worst making the play offs, and at best automatic promotion.

The feeling that the supporters have is mirrored within the dressing room, with the players and staff looking forward to what lies ahead.

Jordan said, “At the start of the season you might have looked at other sides and the budgets and squads and think that we wouldn’t have a chance of promotion, but inside the squad we always had that belief.

“It’s exciting, it’s where you want to be and it’s definitely the sort of place every player wants to be at this stage of the season.

“We’ve had a good season, but we want to make it a great season. If we don’t make the play offs, it won’t even be a good season now.”

If the Greens are to make it a ‘great season’ then they will have finish the season strongly.

The final four games are all against sides who have the same aspirations as Argyle, beginning with Wycombe on Good Friday.

They are just outside the top six, but level on points with Sunderland and Sheffield Wednesday, five behind the Greens.

Jordan is not fazed by the fixtures and in fact, feels they could work in Argyle’s favour.

He said, “A lot of people had questions about the run in, would you rather play the teams at the bottom or teams at the top?

“We’ve got teams at the top and to get promotion you have to beat those teams, it’s not easy to get promoted.

“We have to play them at some point in the season and we’re in a good place at the moment so it’s tough for us yes, but it’s going to be tough for them as well.”

And why wouldn’t he be confident?

He’s been part of a side that has lost just once in the last nine matches, keeping eight clean sheets in that time.

They are one of the form sides in the division and feel as if they can beat anyone when they are playing like this.

“It’s obviously a nice feeling to win games and not concede but that has become a minimum requirement for us now,” Jordan said.

“If you can keep a clean sheet, it gives you the perfect foundation to go out and get the win.

“A lot of the credit has to go to the coaching staff; they make sure everyone knows what they have to do.

“It might come down to a tight game at the end of the season and when everyone knows exactly what to do and when to do it, it will hold us in good stead.”