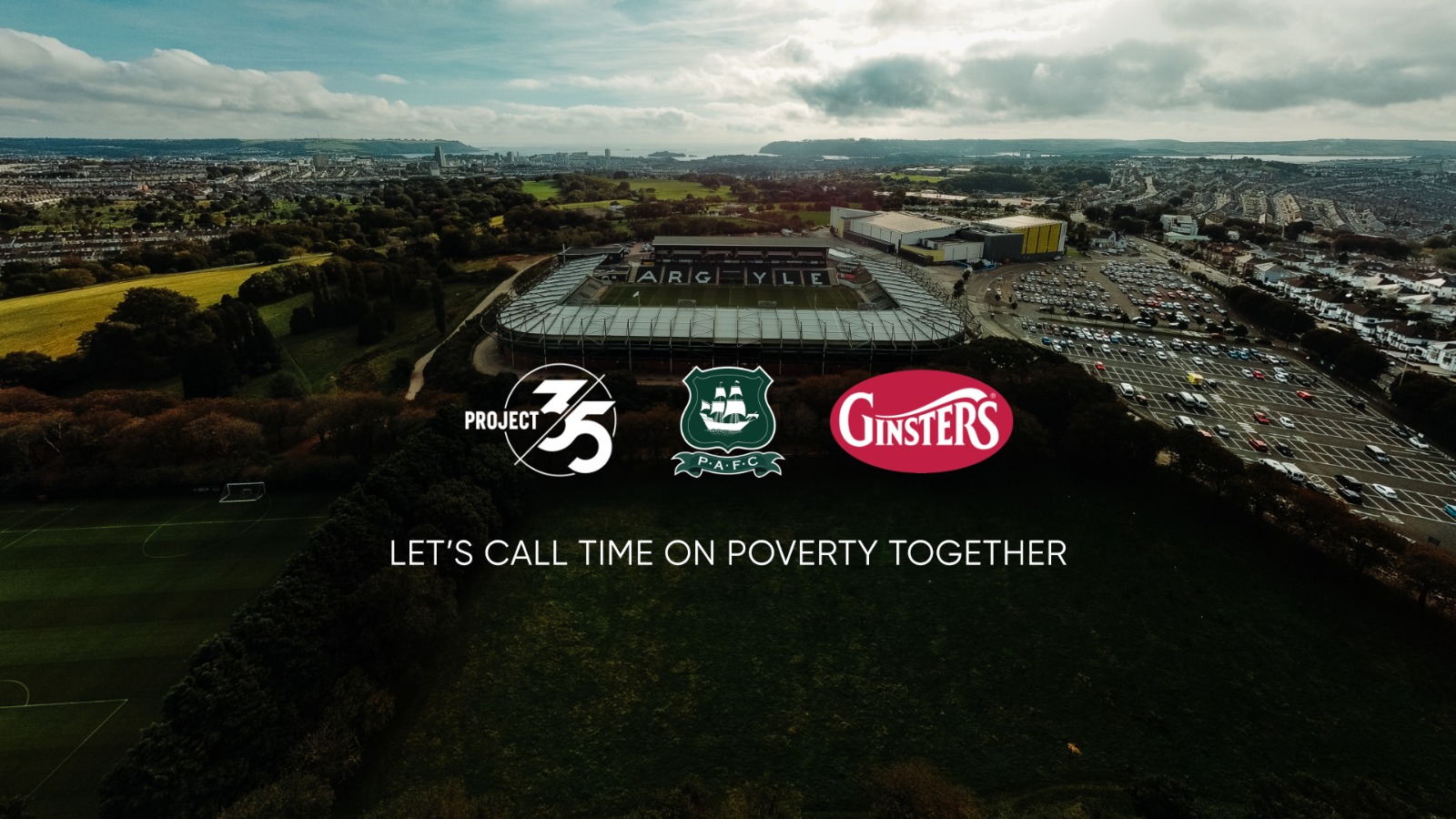 The Making of Project 35

There are very few principal partnerships in sport, let alone lower-league football, that could have pulled off something as ambitious as Project 35.

Just over a week on from the launch of the Pilgrims’ ambitious social outreach campaign, which resonated with people to such an extent that it gained international media coverage as far away as Brazil, Argyle’s Head of Commercial Operations, James Greenacre, is keen to emphasise the crucial role of Ginsters in bringing the campaign to life.

He said: “As we have made clear during our updates throughout the process, we left no stone unturned when making the best decision for the Front of Shirt for the 22/23 season.

“We had all agreed internally that if the opportunity presented itself to make an impact in the community, we would take it very seriously. It was through conversations with Ginsters, though, that Project 35 was truly born – and given the themes surrounding food poverty in our local community, we couldn’t have a more appropriate partner on board to deliver our aims.”

Struck by the premise, initially presented by James’ Commercial team and the Argyle Community Trust, Ginsters instantly pledged their support, which includes a commitment to Ginsters staff volunteering for the Project on company time, as well as the donation of 100,000 balanced lunches – including Ginsters products, fruit and salad – to kick off the campaign.

James continued: “It is a phenomenal gesture from Ginsters to donate components of their principal partnership to Project 35, most notably the Front of Shirt logo.”

The agreement from Ginsters to grant the Front of Shirt to Project 35 was an integral pillar of the plan, with the huge exposure on offer from the Pilgrims’ front of shirt an essential asset for raising awareness.

Placement on the Front of Shirt is the most prestigious and effective brand exposure at Argyle, with millions of engagements across platforms throughout a season.

With Argyle’s digital platforms improving every year, the Project 35 logo will be engaged with on the club’s official website and app by around 100,000 users per month, as well as 250,000 followers on social media. These figures are added to by the millions of users who engage with Argyle’s brand for third-party use, including on the extremely popular video game franchises FIFA and Football Manager.

There has never been a more impactful time in the club’s modern history to deliver a social outreach campaign using the power of Argyle, with attendances at historic highs at Home Park.

The Greens’ average attendance last season, which finished at 13,130, was the club’s highest since the 05/06 season - our second in the Championship – with fans flocking to Home Park to witness Steven Schumacher’s side hunt down, and narrowly miss out on, a place in the play-offs.

You would have to go back to the legendary 1974/75 ‘Dream Season’, where Pilgrim legends Billy Rafferty and Paul Mariner led the Greens to promotion under Tony Waiters, to find a higher average Argyle attendance in the third tier of English football. Season tickets for the 22/23 campaign are building on last season’s impressive figures, too.

With Ginsters firmly on board, Project 35 – still without a name at this stage - was handed to Argyle’s media department to come up with a brand, logo, and name, in preparation for the launch and kit reveals later in June.

Argyle’s Head of Marketing & Communications, Jamie Yabsley, said: “When I presented the idea to the rest of the team, they were all buzzing – what an amazing opportunity for us be at the forefront of something brilliant for Plymouth, Devon and Cornwall.

“By being handed the opportunity to effectively create our own brand for the Front of Shirt to raise awareness, we were able to come up with a logo which will complement our 22/23 kits beautifully, and drive even more awareness for Project 35.”

The club shifts around 10,000 replica kits per season, though Jamie notes that interest in the upcoming kit reveal is more heightened than the usual high levels.

He said: “We’ve had an awful lot of people coming to us in the shop, those who don’t always buy a replica kit, or haven’t for a while, saying that they want to get their hands on one.

“To be in a position to do something different is a privilege, and we’re really looking forward to pushing the Project 35 story throughout the season.”

For more information on Project 35, check out our dedicated mini-website. If you would like to get involved in upcoming Project 35 initiatives, email community@pafc.co.uk