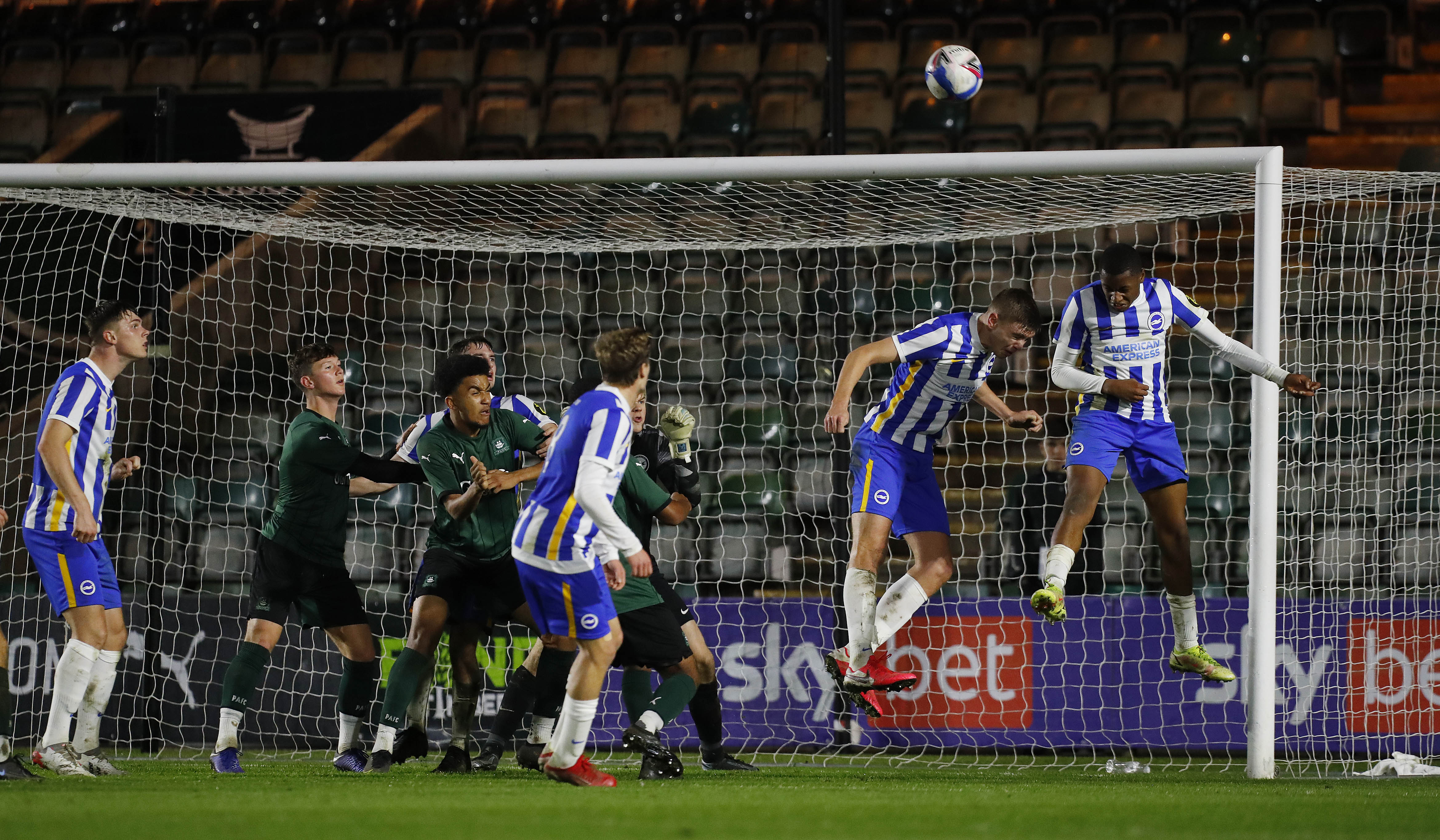 The Argyle Academy have been knocked out of the FA Youth Cup losing 2-1 to Brighton & Hove Albion despite a magnificent performance at Home Park.

The young Greens played above themselves against a Category One opponent and can count themselves unlucky they ended up on the wrong end of the result.

A first half penalty from Samy Chouchane and a second half strike from Marcus Ifill had Brighton two to the good but a late Brandon Pursall header gave the Pilgrims hope.

Darren Way made two changes to the side that drew with Newport County AFC in the Youth Alliance league the Saturday before, with Freddie Issaka and Carlo Garside coming in for Oscar Massey and Jack Endacott.

Brighton are a Category One academy, the highest classification available, and are currently 13th in the under-18 Premier League, rubbing shoulders with the likes of Arsenal, Chelsea, Southampton and Tottenham Hotspur – it was always going to be a tough task for the young Pilgrims.

However, they were the better side in the first half and did not deserve to go in at the break behind.

They set their stall out early and it was a fast start from Darren Way’s side, with Oscar Rutherford coming close to an opener in the first minute.

Angel Waruih weaved his way past three Brighton defenders before laying the ball to Jamal Salawu inside the box, his low pass found Rutherford whose first time shot was blocked.

After an opening 20 minutes where neither side managed to fashion a chance, a big one fell to Argyle’s Freddie Issaka.

He pounced on a slip by Brighton centre back Leigh Kavanagh before seeing his effort saved by Tommy Reid.

In an opening quarter where Argyle were able to limit their opponents to deep crosses, Brighton finally broke through.

An incisive through ball released Ifill who was felled in the box by a sliding Lewis Moyle.

The Argyle ‘keeper was booked and couldn’t quite get down to stop a powerful Chouchane spot kick.

Going a goal behind didn’t seem to affect Argyle and they remained on the front foot.

Issaka and Rutherford in particular were causing problems for Brighton and it was that pairing that combined to set up a great chance to equalise.

Rutherford found Issaka on the penalty spot with a lovely pull back but the first-time strike went inches wide of the right post.

As good and intense as Argyle were in the first half, Brighton came out in the second on the front foot – showing their quality.

They seemed a different team, and Ifill was the aggressor, first skimming the crossbar with a venomous strike from the edge of the box, but that was just a sighter.

A minute later he rounded off a flowing counter to smash the ball across goal and into the net. A quality goal.

Again Argyle didn’t let their heads drop and fought back into the game. They kept plugging away and passing their way up the pitch.

Pursall looped a header back across goal and into the back of the net – the game was back on.

Not content with a consolation, the Greens pushed on again – Caleb Roberts almost managed to bundle the ball over the line after a short corner but Brighton managed to hold firm.

The Greens put everything into it but just ran out of time. A valiant effort but ultimately the journey ends.