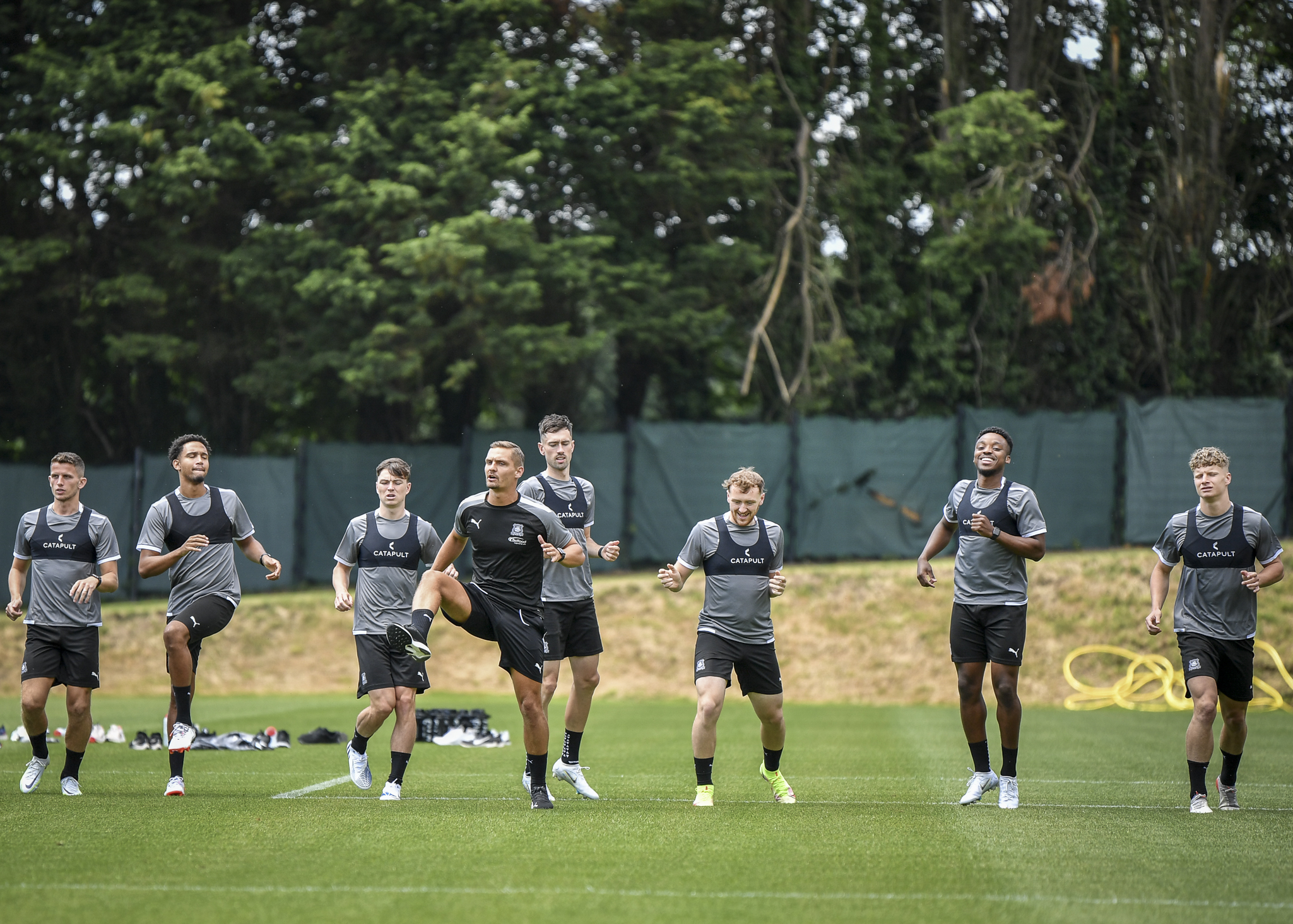 First day of pre-season and a boiling hot day; they go together like scones and jam, strawberries and cream and Ryan Hardie and hotdogs.

Despite the weather, the players returned to Home Park with smiles on their faces and with tales of a summer of rest, holidays and recuperation.

Alfie Lewis, who is in his first pre-season with Argyle, was looking fit and strong when he arrived at Home Park and was looking forward to getting going.

He said, “The first day of pre-season, after not seeing the lads for six or seven weeks, is always great.

“It’s always a good day, catching up with everyone and just falling back into the ways we had at the end of last season.

“It looks as if everyone has had a good summer and are ready to get going again.”

In his first full season as a manager, Steven Schumacher was prowling around the changing rooms, checking in on all of his players as they were put through physical tests.

“It’s great to catch up with everyone and see how they’ve been over the summer,” he said.

“No-one looks forward to pre-season training but today has been a good day. There are so many tests nowadays, but they are so important for our planning for the new season.

“It’s a coalition between the fitness staff and the football staff so we need to get it right, if we do, we could have another good season.

“There is nothing better is there though, the sun is out, the training pitches are looking great, and everyone is smiling.”

So, to run through those tests, there were mental SCAT test for balance and memory, leg strength tests, power and agility tests and more. They were all undertaken in the morning with Head of Fitness and Conditioning, Elliot Turner, Sports Therapist, Abner Bruzzichessi and Physiotherapist, Nick Fulton watching on.

“It’s great to see the lads back in such good shape,” Elliot said.

“The tests that we have done so far has shown that the guys are in great condition, which is always really pleasing.

“It’s important to do these tests right at the start of pre-season, so we can give individual plans to the boys. It’s about us getting the right plan for each specific player.”

Following a bit to eat for lunch and more time to catch-up, the players made the short walk across to Harper’s Park for an afternoon of running.

The sun was only getting hotter and again, led by Elliot, the players were put through their paces in the form of three fitness tests.

A short warm-up was followed by a T-test for agility with all the players keen to show they were in good shape.

Seeing the likes of Brendan Galloway and Alfie Lewis back fit and firing and the introduction of new signing Matt Butcher to the group was another sense of happiness for the manager.

He said, “We’re glad to get Matt in. We have had him watched over the last couple of years and liked what we’ve seen.

“He is a really good lad, a good size and is tactically great as well, but he may have put in a bit too much effort today though, he was looking very fast in the run and now has a lot to live up to”

A short break to take on fluids and get rehydrated was followed by the final activity of the day, a 1500m run.

The squad was split into four groups who would take it in turns to run four laps around the pitch at maximum effort – enough to make anyone watching on sweat.

Even for Adam Randell, the session was a test, “That was tough.

“As a group you can already see the standard these guys set which is great and only a good thing for the season.

“Matt [Butcher] is certainly setting the pace, I’m a little bit disappointed I didn’t win that to be honest but yeah, he looks good.

“It’s great to get some new faces in to add to the squad, but we have a great group here and it’s great to see everyone again today.

“These sessions are hard, but they are so important, pre-season is as much about the mental side as it is the physical side and you can see that the lads are cheering each other on and trying to get the best out of each other, which is great to see.”

And it was a surprise in the results, with Adam left frustrated that the new man, Matt Butcher, was the quickest. Something to work on Rands.

So, with day one over and done with the hard work doesn’t let up, with a full week of training planned before the first pre-season fixture against Plymouth Parkway on Saturday, 2 July.