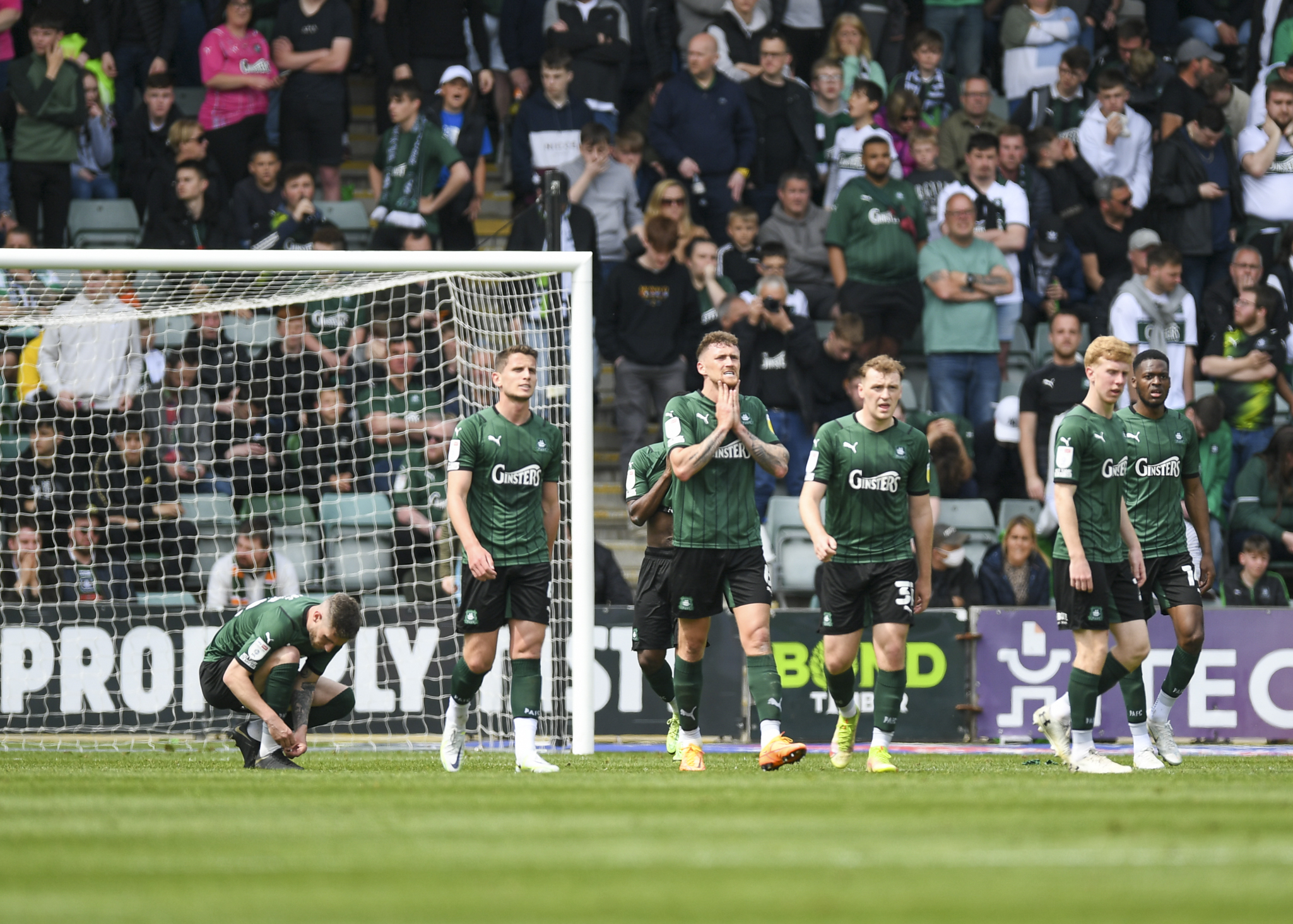 After nine months of thrills and spills, the Pilgrims missed out on the Sky Bet League One play-offs on the final day.

Nothing went Argyle’s way, despite the outstanding support inside Home Park, but congratulations to MK Dons, who won the game with a superb four goals from Scott Twine and a Harry Darling header.

On his 38th birthday, Argyle manager Steven Schumacher made two changes from the side that drew 1-1 at league leaders Wigan Athletic last weekend, with Jordon Garrick and Ryan Law replacing Ryan Hardie and Conor Grant.

Garrick had the first shot in earnest, deflected wide by the body of Darling after tenacious work from Ryan Broom. The corner was cleared to Steven Sessegnon for a 30-yard speculator that was always drifting wide.

The Dons responded with swift break from David Kasumu and it needed a brave block from Mike Cooper, diving at his feet to blunt the threat. The visitors then won a free-kick 25 yards from goal and Twine fired a dipping knuckle-ball on to the bar for a major Pilgrim reprieve.

A cracking start to the game continued with a dart into the left channel from Garrick and his low cross was met first-time by Luke Jephcott, but steered inches wide. Law repeated the delivery delight with another wonderful pass across goal for Jephcott, who again flicked it just past the post.

In response, the dazzling feet of Twine won a free-kick on the edge of the box and he duly clipped a lovely strike into the top corner for a Dons lead. Moments later, Kaine Kesley-Hayden shaved the side-netting in a terrific spell for the visitors.

Good play from Sessegnon resulted in a low cross flicked narrowly wide by Jephcott but the Dons immediately hit Argyle with a swift counter, Troy Parrott denied by an outstanding near-post save from Cooper.

Unfortunately, the afternoon took another frustrating twist five minutes before the break, as Twine weaved into space from the left and lashed an emphatic finish inside the far post. The Greens were hit by another massive blow three minutes later, as Darling headed home from a routine corner.

A nightmare first half took a further horrible twist when Jordan Houghton was dismissed for a second yellow card after a fairly innocuous tackle.

The Pilgrims made two alterations at the interval, introducing Niall Ennis and Adam Randell for Gillesphey and Jephcott. A barnstorming run forward from Wilson fed Broom for a cutback to Mayor, who steered his 20-yard effort wide.

Argyle had no choice but to commit men forward, subsequently leaving big gaps at the back, and only a great recovery from Randell and Dan Scarr prevented a fourth for the Dons following a Parrott break.

The massively improbable became impossible on the hour, when slick play from the visitors culminated in a low Kasumu cross calmly slotted into the net for Twine to complete his hat-trick.

Joe Edwards for Garrick was the next Argyle change, as Cooper produced a trio of fine saves to briefly delay further pain. Twine, however, curled a fine fourth in off the post to complete a tremendous individual display.

There is no hiding from the fact today was a major disappointment but everyone connected with Argyle can still be proud of a thrilling season of football. There have been far more highs than lows and, through it all, the Green Army has been magnificent.