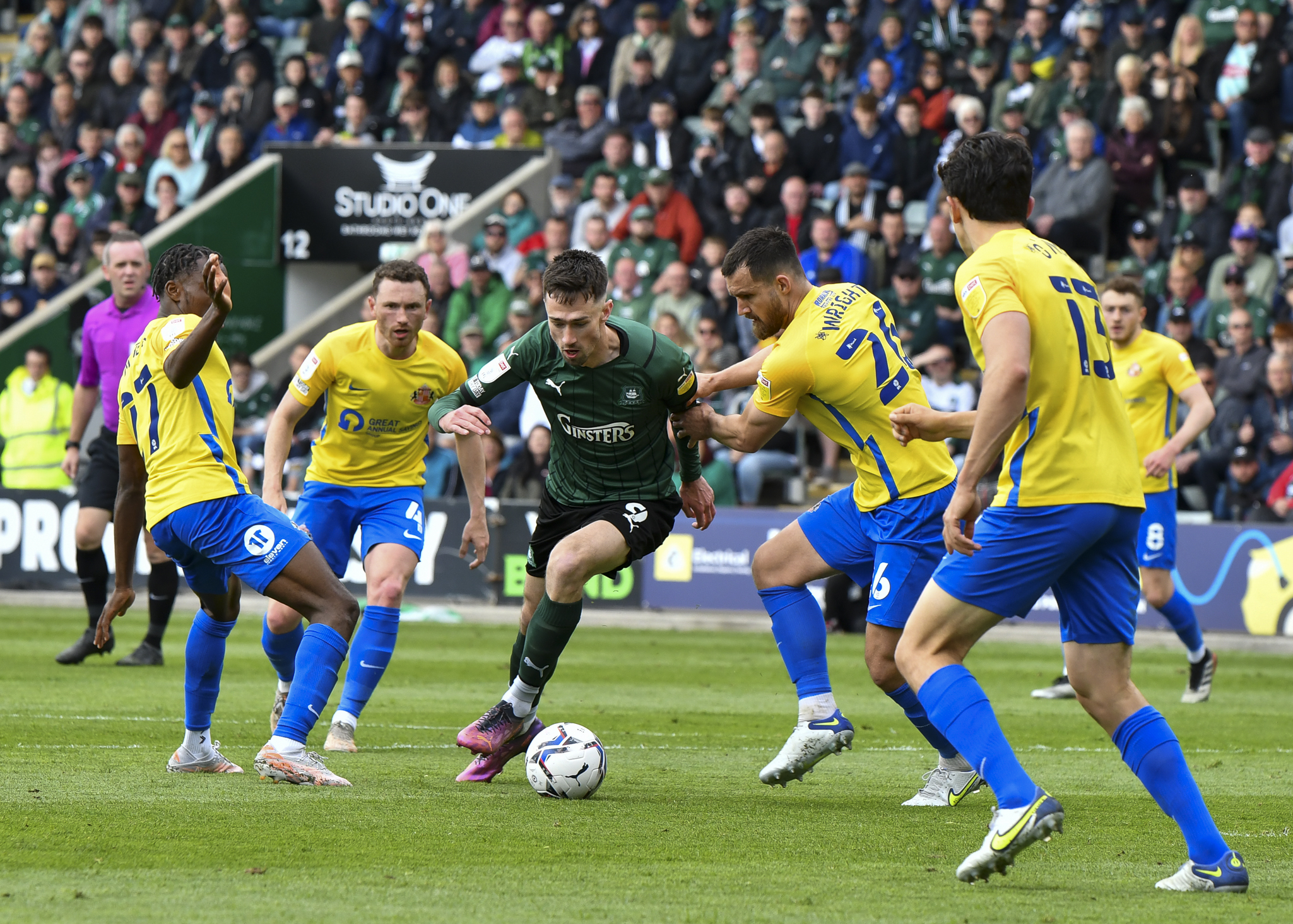 The Sky Sports cameras descended on Home Park for a beautiful Devon day but, on the pitch, it was a case of two very strong teams cancelling each other out.

Argyle manager Steven Schumacher made two changes from the Good Friday loss at Wycombe, as Ryan Hardie returned from injury to partner Niall Ennis in attack. Jordon Garrick and Luke Jephcott dropped to the bench.

Nathan Broadhead scored a last-gasp winner for the Black Cats at home to Shrewsbury on Friday and it was brilliant recovery work from Panutche Camara that stemmed an early break by the visitors.

In a highly competitive start, Camara again thwarted Broadhead with some excellent tracking back before a delicious cross from Conor Grant was half-cleared to the all-action Camara for a half-volley launched over the bar.

The Green Army were then purring after a delightful counter involving Grant, Camara and Steven Sessegnon. The ball was recycled for a low cross by Sessegnon and Ennis forced a decent low save from Anthony Patterson.

In a tight game, Danny Mayor turned sharply 25 yards out for a shot at goal, deflected wide by a Sunderland head. Macaulay Gillesphey followed up with a curling effort that dipped a tad too late to trouble Patterson.

Camara, meanwhile, continued his swashbucking display, winning the ball in midfield to set up Ennis, who laid the next pass a fraction too far ahead of Mayor for a shot on goal. Sunderland responded with a clip over the top for Ross Stewart but his slightly heavy first touch allowed Mike Cooper to make a brave low block.

In general, however, Argyle were the team looking a greater threat and a lovely cross from Grant picked out the darting run of Hardie for a downward header steered narrowly wide of the near post. An intriguing first period ended with a pass from Ennis angled just beyond the path of Hardie.

A terrific tackle from Gillesphey blunted a sharp run by Dennis Cirkin immediately after the restart and it was then down to Cooper, saving well with his legs after a stabbed shot by the lively Broadhead from a tight angle.

A powerful run and cross from Sessegnon was gathered under pressure by Patterson after yet more Camara energy started the Pilgrim move. The Black Cats came back with a deep cross from Luke O’Nien that needed clearing by the well-positioned Dan Scarr.

Camara was forced off with an injury midway through the second period, with Adam Randell the readymade replacement. Mayor then tricked his way beautifully into the box for a pass slipped to Grant on the edge of the box, but his steered effort was deflected wide.

As the game entered the final 20 minutes, a typically strong defensive header from Scarr repelled a cross by O’Nien, who was then replaced by Lynden Gooch, followed by Stewart spinning on the edge of the box for a shot rifled narrowly wide.

Jephcott for Ennis was the next Pilgrim change, while Patrick Roberts came on for the visitors, as both teams looked to unlock the door to three massive points in the play-off race. Daniel Neil for Jay Matete was the final Sunderland switch.

Garrick replaced Hardie for the final 10 minutes and he wasn’t far away from a lovely whipped cross by Grant that defender Bailey Wright could only scoop in the air for Patterson to hastily collect.

Sessegnon continued to spark on the right flank and his industry led to a cross for Grant, who cut back on his right foot for a shot that flicked off a Sunderland leg before creeping past the post.

The Pilgrim play-off push moves on to a huge challenge at Wigan Athletic on Saturday.