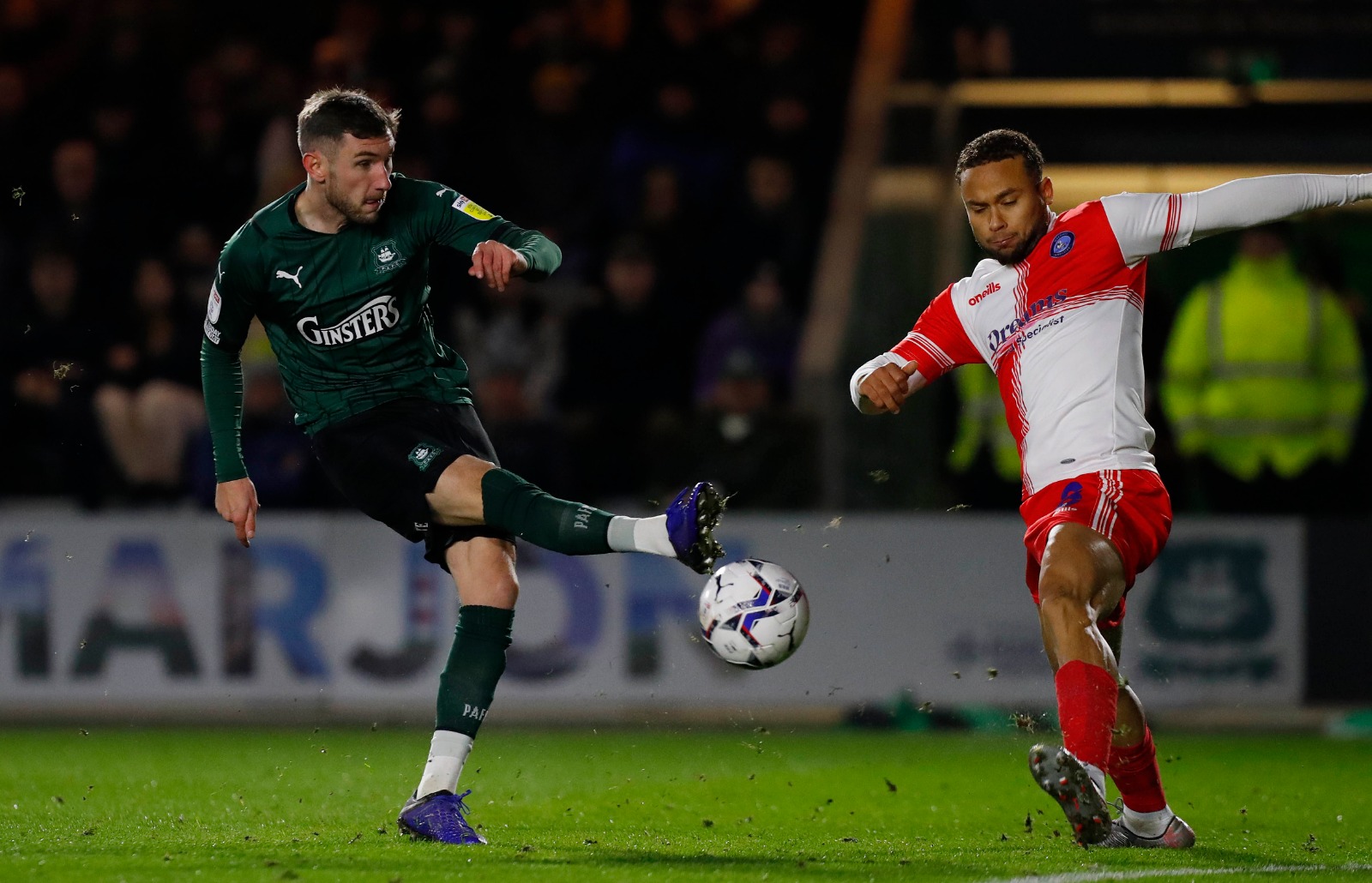 Argyle suffered their first home league defeat of the season and, in a repeat of the weekend reverse at Charlton, it was a case of second-half strikes going against the Greens.

A tight, even affair was low on genuine chances until Sam Vokes turned sharply for the opener on 62 minutes and Anis Mehmeti confirmed the Wycombe victory with two smart finishes in the closing stages.

Wycombe edged past Bolton with a 1-0 win on Saturday and their boss Gareth Ainsworth included former Pilgrim loan goalkeeper David Stockdale as his custodian.

The fast feet of Mayor gave him a sniff of goal inside four minutes but the slightly scuffed effort was deflected clear. Mehmeti returned the favour for Wycombe, jinking into the box for a low drive that was well held by Mike Cooper.

On that theme, the early exchanges were evenly-matched in terms of possession, territory and formations, although Vokes did find some room on the left for a drilled cross glanced clear by Dan Scarr.

Argyle took their attacking turn with a clever pass inside the left channel from Mayor and Jephcott’s low cross hacked away at the near post. Former Exeter midfielder David Wheeler was then booked for a pull on Panutche Camara and Conor Grant’s subsequent free-kick nodded goalward by Scarr, but comfortable for Stockdale.

As well as his aerial prowess, Scarr took the chance to break through a vacant midfield and the fizzed pass to Jephcott almost released the Pilgrim forward. Jephcott did pick out strike-partner Ryan Hardie moments later and he dropped the shoulder for a left-foot drive dragged inches wide.

Wheeler jabbed a volley wide for Wycombe on the half-hour and Jephcott replied with a decent effort from 22 yards that forced Stockdale into a decent low save.

Galloway made a superb surge forward in Argyle’s next attack but, as he struck the ball, the Argyle defender crumpled on the turf with a worrying injury that sadly saw him stretchered off after lengthy treatment, with Gillesphey the replacement.

Best wishes to Brendan from all of us.

The game resumed with a corner that bounced out to Mayor for a 20-yarder rifled narrowly over. Mayor’s radar was on song just before half-time, lashing a drive at the near post that required alert goalkeeping from Stockdale. Wycombe ended the half with an attacking flurry, repelled by Joe Edwards and James Wilson.

A reverse pass from Mayor to Jephcott conjured the first chance after the break, but the shot was scuffed into the arms of Stockdale.

At the other end, Camara recovered brilliantly to thwart a Brandon Hanlon break but his subsequent backpass to Cooper fell short, and the Argyle ‘keeper’s clearance ricocheted off the encroaching Vokes and looped mercifully short of the goal-line.

Argyle recovered from the scare with brilliant quick feet and a rasping shot from Mayor that flashed just wide, as the football temperature began to rise inside a chilly Home Park.

Wycombe, however, grabbed the lead on the hour, Vokes swivelling sharply from 15 yards and his low drive flashed through the legs of Cooper before hitting the Argyle net.

Mayor, once again, was the Pilgrim looking most likely, as another dart through the middle ended with a left-foot shot steered wide. Argyle were probing with increasing intensity, Grant seeking Camara with a low cross cleared by a Wycombe toe.

The Greens came within a whisker of finding the equaliser on 74 minutes, when Grant superbly worked the angle for a shot across goal that shaved the post. Broom for Jephcott was the first Pilgrim change a minute later, soon followed by Garrick for Hardie.

Unfortunately, the result was beyond Argyle on 85 minutes, Hanlon guiding a pass into the path of Mehmeti for a calm finish past the onrushing Cooper. Mehmeti repeated the trick with another well-taken goal in the final minute.

Dust ourselves down and hopefully back on the winning wagon at home to Wigan on Saturday.