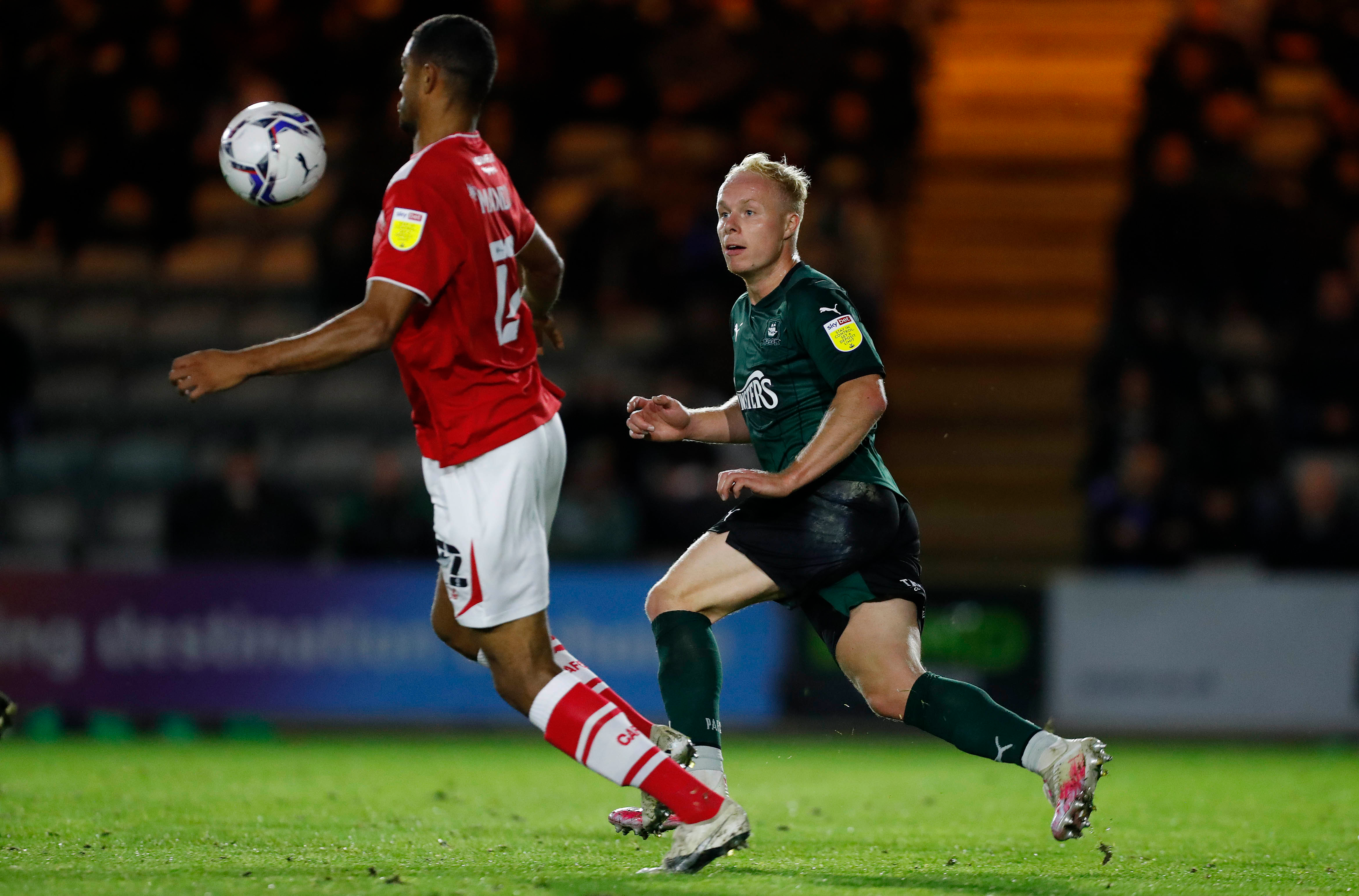 Argyle extended their unbeaten league run to nine matches on a night when the club paid tribute to the amazing courage and professionalism of the NHS over the past 18 months.

The Pilgrims fell behind to a slightly fortuitous opener from Scott Kashket in the early exchanges and spent fully 68 minutes knocking on the Crewe door before Ryan Hardie found the key with a tremendous low finish to secure a hard-earned draw.

Argyle manager Ryan Lowe made just the one switch from the weekend win over Doncaster, Macaulay Gillesphey replacing Brendan Galloway in defence. Crewe boss David Artell opted for two changes from the last-gasp draw at Rotherham, bringing in Terrell Thomas and J’Neil Bennett.

Dan Scarr introduced himself to Bennett with a fine covering challenge after a swift Crewe break but the visitors were in front moments later, as a cross from Kashket strangely sneaked inside the near post.

The irrepressible Panutche Camara responded with typically energetic work in midfield and it was then a loose pass from the Crewe defence that presented Hardie with a chance to drop his shoulder for a left-foot shot turned wide by Will Jaaskelainen.

A sumptuous pass from Gillesphey picked out the next Hardie run, this time the effort blocked by Donervon Daniels. The Pilgrim pressure was relentless, Luke Jephcott forcing Jaaskelainen into a superb instinctive save on 13 minutes.

Ryan Broom took up the mantle with a run and pass inside for Gillesphey, who forced the ball across for a Hardie half-volley driven into the turf before flashing narrowly wide.

The Greens were forced into a change on the half-hour, Conor Grant limping off with a muscle problem to be replaced by Jordon Garrick. The visitors returned to action with a low drive from Scott Robertson saved by Mike Cooper, quickly followed by an even better stop to repel a Thomas thunderbolt from distance.

Argyle restored their control of possession and territory, with Camara, Broom and Jordan Houghton all probing from midfield for a killer pass. Joe Edwards did pick out Broom with a clipped cross but the diving header was steered beyond the far post.

The curtain came down on a frustrating first period interrupted by niggling knocks to players from both sides, with the final act a low save by Cooper after a break from Robertson. James Wilson took a nasty blow to the head in the same attack, prompting his half-time withdrawal for Galloway.

A low cross from Jephcott was inches away from finding Edwards at the back post in an otherwise scrappy start to the second half, with Garrick also asking questions through his pace and power cutting in from the left flank.

Bennett was posing a similar problem from the Crewe wing, winning a trio of set-pieces that required disciplined defending from the Greens. At the other end, all of Argyle’s attacking impetus was just falling down with that crucial final pass.

A brilliant surge down the left from Broom, fed by Garrick, finally solved that conundrum, slipping the ball inside for Hardie to take a touch and fizz a confident finish into the far bottom corner.

Ryan Law replaced Jephcott, with Garrick moving forward to partner Hardie in the last ten minutes, as a cross from Camara bounced to Broom for a shot dug out of his feet and sent drifting beyond the top corner.

Law was another Pilgrim looking very sharp, as he danced through the Crewe defence and was halted by an untidy challenge that prompted gentle penalty enquiries.

Kieran Agard for Hardie was the final Pilgrim change, with an extra substitution allowed due to the concussion protocols in place for the loss of Wilson, but, despite incessant late pressure, Home Park had to settle for a battling point.