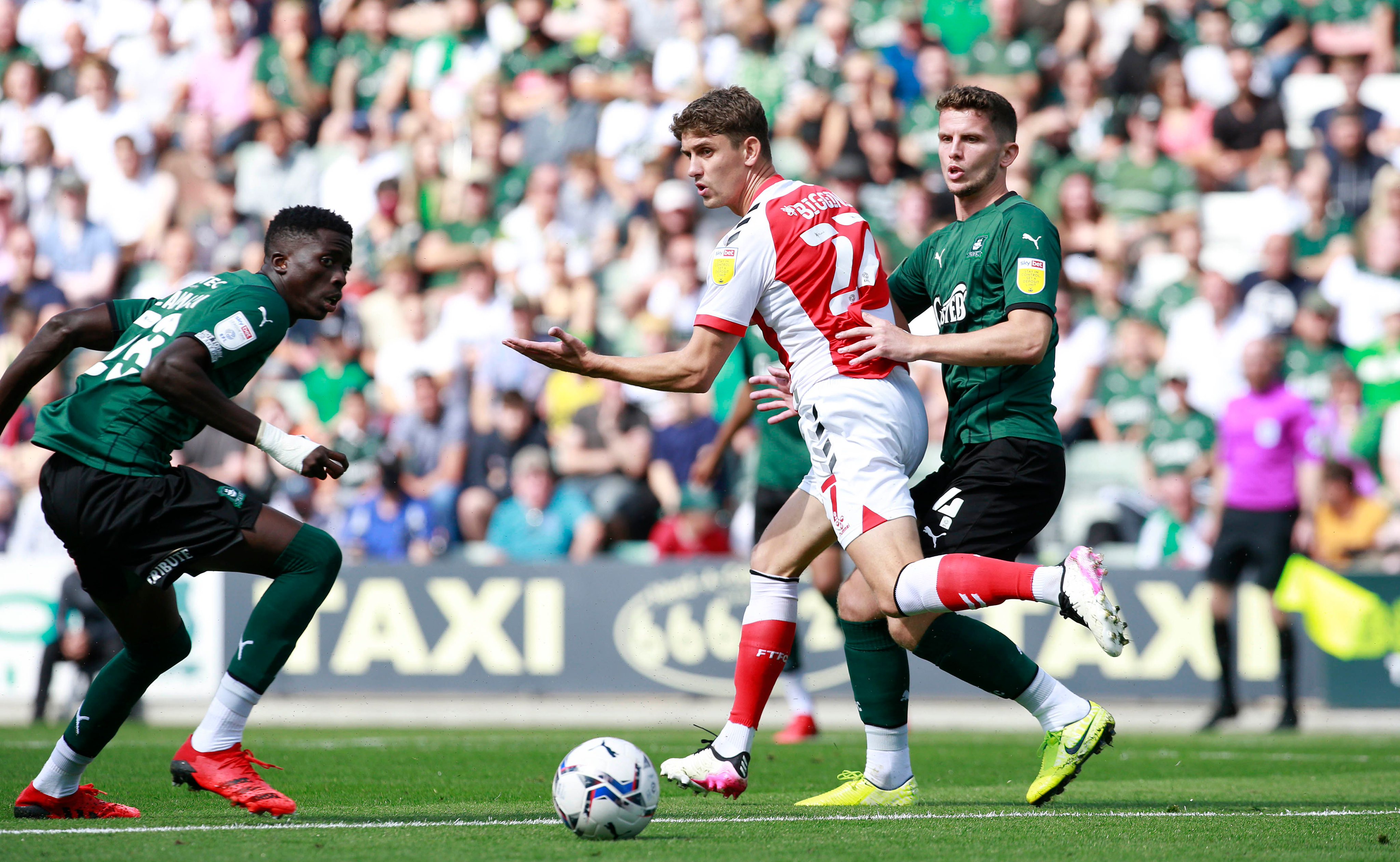 Argyle and Fleetwood Town served up a Home Park treat that somehow ended with only two goals scored, one for either side.

The Pilgrims were outstanding in the opening half-hour and thoroughly warranted the lead given to them by another emphatic Ryan Hardie finish, but the Greens were pegged back by a Callum Camps volley before half-time.

The thrills kept on coming after the break and, while the visitors gave everything, Argyle will feel they created enough good moments to win two games.

Fleetwood had a break in midweek and manager Simon Grayson kept faith with the side that grabbed a last-minute over Cheltenham last Saturday, although the visitors were on the back foot in the opening stages, with a deflected shot from Hardie bobbling wide.

A fabulous cross-field pass from Macaulay Gillesphey released Grant on the left and his dipping delivery was met on the volley by Luke Jephcott. The scrambling Fleetwood defence managed to block the effort and had to repeat the trick seconds later from a well-struck Houghton drive.

The visitors were content with a cautious approach but they could only reluctantly admire a dazzling Argyle move that started with Joe Edwards on the right and concluded with a drilled Grant cross, desperately defended at the near-post by Tom Clarke.

The goal was coming and another beauty from Hardie, running on to a lovely ball in the channel from Galloway and the young striker took a touch before lashing a superb left-foot half-volley into the top corner.

Argyle were all over Fleetwood, Panutche Camara winning the ball in midfield, for the umpteenth time, but just under-hit his pass for Jephcott peeling off his marker. The swashbuckling Greens were in behind again on the half-hour, Ryan Broom finding Hardie but the shot after cutting inside on to his right foot was charged down.

Grant to Broom was the next combination from more great work down the left, following a fine pass by Houghton, but the man on loan from Peterborough was denied by a good save from Alex Cairns.

Fleetwood interrupted the Pilgrim dominance with a leveller from their first real attack, Danny Andrew delivering the cross for Camps to convert a fine volley on the stretch.

Incredibly, the visitors almost pinched the lead when Shayden Morris fizzed a low shot against the post from a half-cleared corner, while Darnell Johnson earned himself a booking for simulation in the penalty area.

Gillesphey responded with a delightful pass to Grant, cut back to Hardie, who scooped his effort over to complete a breathless first period. Jephcott introduced himself to the restart with a shot saved by Cairns.

The dangerous Camps came back with a surge into the Argyle box and his near-post shot was expertly tipped wide by Mike Cooper. The save from the subsequent corner was even better, thwarting a deflected Clarke header with an outstretched leg.

It had turned into a hugely entertaining, end-to-end encounter, with Morris digging out a low cross that required terrific defensive anticipation from Galloway to repel, and plenty of strong challenges in midfield from both sides.

Broom clipped a fine cross from the left toward Hardie, with Edwards also lurking, and when the loose ball fell to Camara, he was denied a certain goal by an amazing last-ditch challenge from Harrison Biggins.

Argyle’s first change arrived ten minutes from time, Jordon Garrick replacing Edwards on the right, but the Greens were grateful to a combination of Cooper and Galloway in just about thwarting a Morris run through the middle.

Garrick then produced a stunning left-footer from 22 yards that thundered against the bar before Ryan Law and Rhys Shirley came for a final throw of the dice, but a fabulous game would end in stalemate.