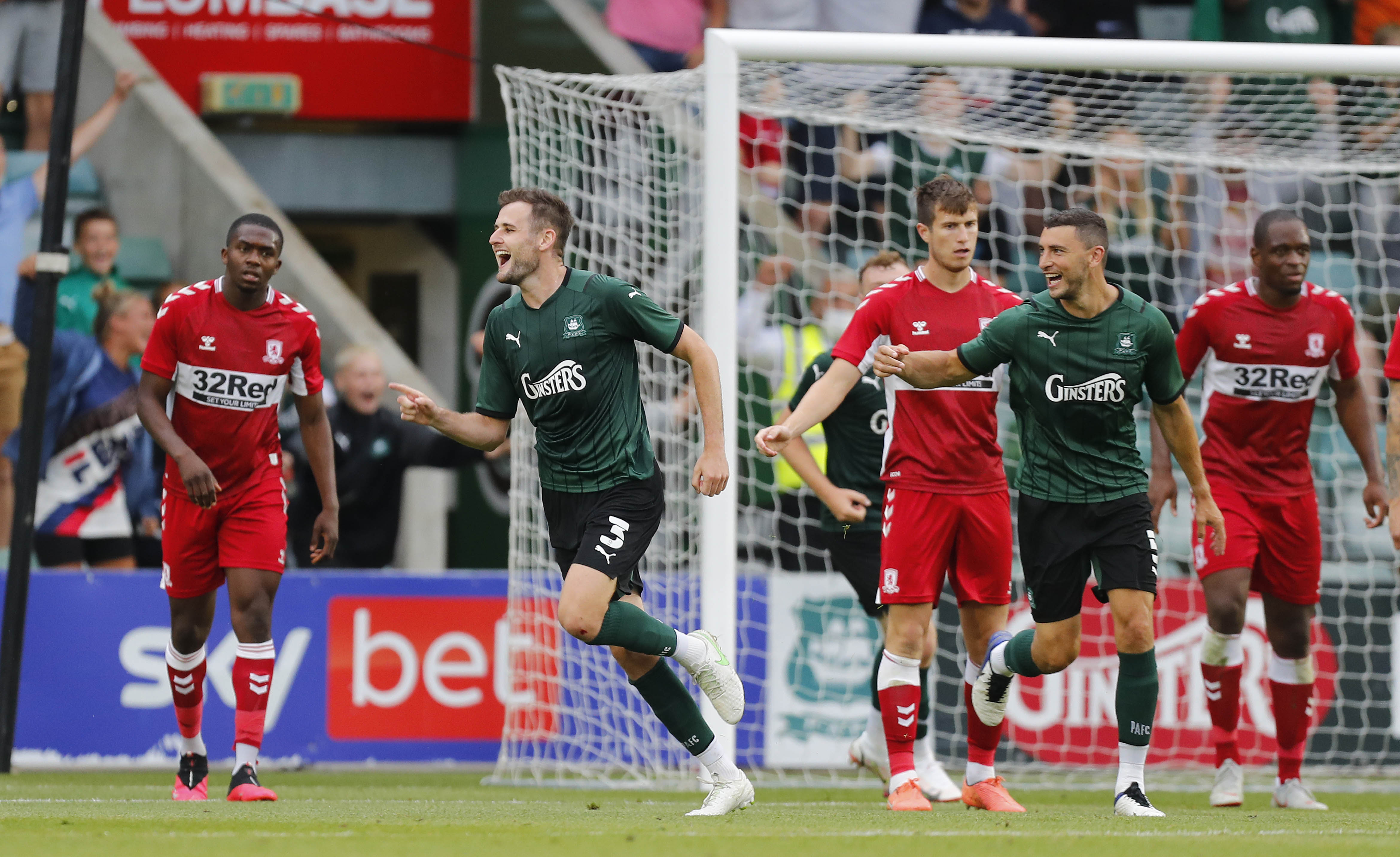 Argyle continued their pre-season schedule with another lively display before going down to an unlucky 2-1 defeat to Middlesbrough at Home Park.

The visitors led through an early Matt Crooks strike but a fine header from Macauley Gillesphey deservedly brought the scores level 10 minutes after half-time, only for Marcus Tavernier to rifle home a winner midway through the second period.

Middlesbrough manager Neil Warnock, a former favourite of this parish, started with a similar system to the Pilgrims and looking to build momentum for his Championship side after the previous victory at Tavistock.

A sweeping Pilgrim move involving Camara and Niall Ennis found room for Jephcott, who saw his low cross diverted for a corner, quickly followed by some Danny Mayor magic in a bright start from Argyle.

Boro responded with a shot from Jamie Paterson, competently parried clear by Mike Cooper, and the visitors continued to show some menace, equally matched by good defending from James Wilson and Dan Scarr.

Argyle came back with some more neat football but were hit by a suckerpunch, as a cutback from Uche Ikpeazu was met by Crooks with an accomplished low finish into the corner from 15 yards.

A whipped cross by Conor Grant found Jephcott a minute later and his shot on the turn need a strong block from the Boro defence. Jephcott then had an effort from 25 yards, also on the turn, that flew narrowly beyond the top corner.

A super spell of possession from the Greens culminated in a Grant delivery scuttling across Joe Lumley’s goal in the final meaningful act of a quiet closing period to the first half.

No personnel changes at the interval for either side and the tempo also remained relatively tame before sparking into life with a lung-bursting run from Duncan Watmore, bravely stopped in full flight by Scarr.

Argyle won a corner on the left and a well-flighted outsiwnger from Grant was met perfectly by the head of Gillesphey, steering a super finish into the bottom corner for a deserved leveller.

The Greens had found some pleasing rhythm in their play and Middlesbrough countered with a couple of robust challenges in the midfield area, possibly echoing their slight frustration with the pattern of proceedings.

Warnock opted to introduce a fresh front pairing of Jeremy Sivi and Chuba Akpom on the hour, with the new duo combining nicely in the right channel, a situation read well by Cooper coming off his line to claim the cross.

The Pilgrims were soon back in the ascendancy with a dinked Grant cross bundled away by the Boro defence but a slightly fortuitous bounce then gave Tavernier room to lash his side back in front from the edge of the box.

Brendan Galloway for Gillesphey was the first Pilgrim change, while the visitors introduced the experience of Lee Peltier. The Ryans of Law and Hardie next replaced Ennis and Mayor for the final 15 minutes.

A deflected Akpom shot won Boro a corner and a succession of set-pieces needed disciplined defending from the Greens, who introduced Adam Randell for Houghton, followed by a raft of Academy prospects and young pros given an outing.

It was a fantastic experience for the youngsters and yet more evidence of the emerging talent at Home Park, as a decent game finished with a narrow win for Middlesbrough.