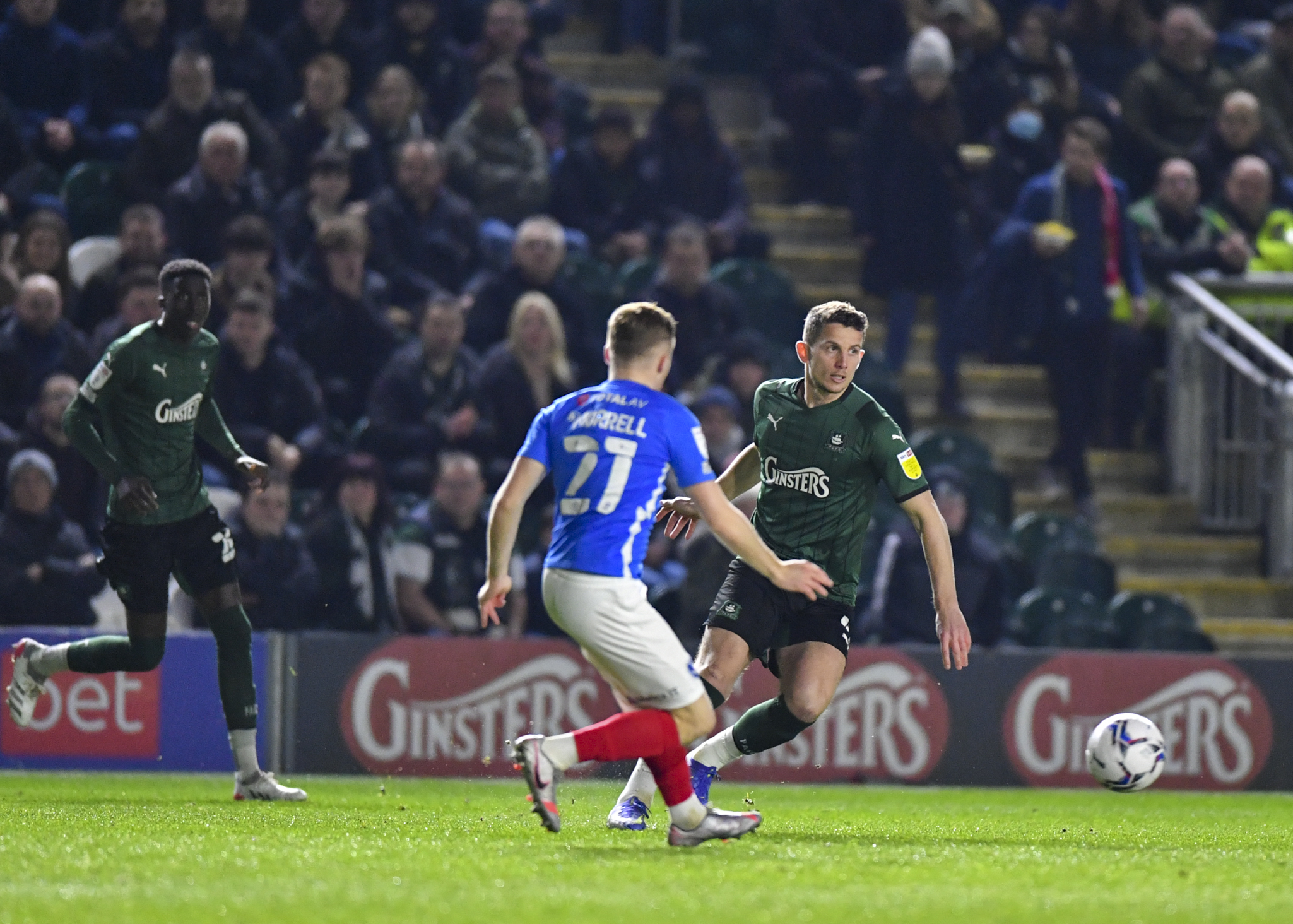 Four straight wins for Argyle, all four clean sheets and Ryan Hardie is enjoying a sparkling run of goal-scoring form.

His latest offering, a 65th minute winner scuttled into the corner after terrific tenacity from Jordan Houghton and Panutche Camara, was enough to see off a Portsmouth side with their own hopes of mounting a play-off push.

In a bright opening befitting the electric atmosphere, a nice exchange involving Camara, Jordan Houghton and Danny Mayor created room for Joe Edwards to have a swing but he was unable to make proper contact.

Pompey, who drew 0-0 at Ipswich on Saturday, were given a taste of Argyle’s slick forward movement with a delightful threaded pass from Mayor for Jephcott to fire back across goal and force a decent low save from Gavin Bazunu.

Despite the busy recent schedule, Argyle’s tempo was outstanding in the opening quarter, although the defensive trio had to watch carefully as a wicked low ball from Denver Hume flashed across the six-yard box.

Mayor trumped that cross with an even better delivery, curling a terrific tempter for Hardie and Jephcott. While they just failed to get a decisive touch, Bazunu was still mighty relieved to see the ball skip inches wide of his far post.

A swerving Mayor effort was then briefly spilled by Bazunu, the Manchester City loanee grabbing the ball at the second attempt before a gentle shove on Jephcott prompted a polite (unsuccessful) penalty enquiry.

After a quiet end to the first period, a long throw from Edwards was flicked back by Hardie for a shot deflected into the arms of Bazunu.

A terrific passing move from the Greens eventually created room for Macaulay Gillesphey to clip in a cross from the left but Jephcott was twice denied by Sean Raggett and Hume throwing their bodies in front of the ball.

Mike Cooper kept himself warm by racing off his line to grab a ball over the top seeking the run of Aiden O’Brien. Moments later, a heavy touch from Cooper almost presented George Hirst with a chance but Argyle’s young ‘keeper quickly rectified the problem.

The Pilgrims responded with more patient work around the Pompey box, Mayor teasing the men in blue before Houghton whipped over a cross that Bazunu did well to hold among the sea of bodies.

Brilliant defending from James Bolton, against his former club, thwarted Hirst at the near post. The noise levels were raising significantly, as Argyle responded with a trio of efforts from Edwards and Camara were blocked by the Pompey defence.

The Pilgrims led two minutes later, Camara driving into the box and squaring an intelligent pass for Hardie to steer a left-foot finish back past Bazunu and into the corner of the net, sending the Green Army wild with delight.

Portsmouth had to be more adventurous and it needed an acrobatic clearance from Houghton to clear one mini scramble. Camara restored the attacking impetus with a sizzling strike from distance that Bazunu almost spilled into the path of Jordon Garrick, who had replaced Jephcott just seconds earlier.

As the game entered the final ten minutes, Pompey threw men forward and James Wilson was next to find a superb defensive header under heavy pressure, as Ryan Law replaced Sessegnon for the closing stages.

Six minute of stoppage time and a succession of Pompey corners cranked up the tension, but Argyle’s imperious defensive unit remained deservedly intact.

Last-minute substitute Adam Randell finished a top night with an audacious 50-yard effort that bounced a fraction wide with Bazunu a long way out of his goal. Bring on Accrington this weekend.