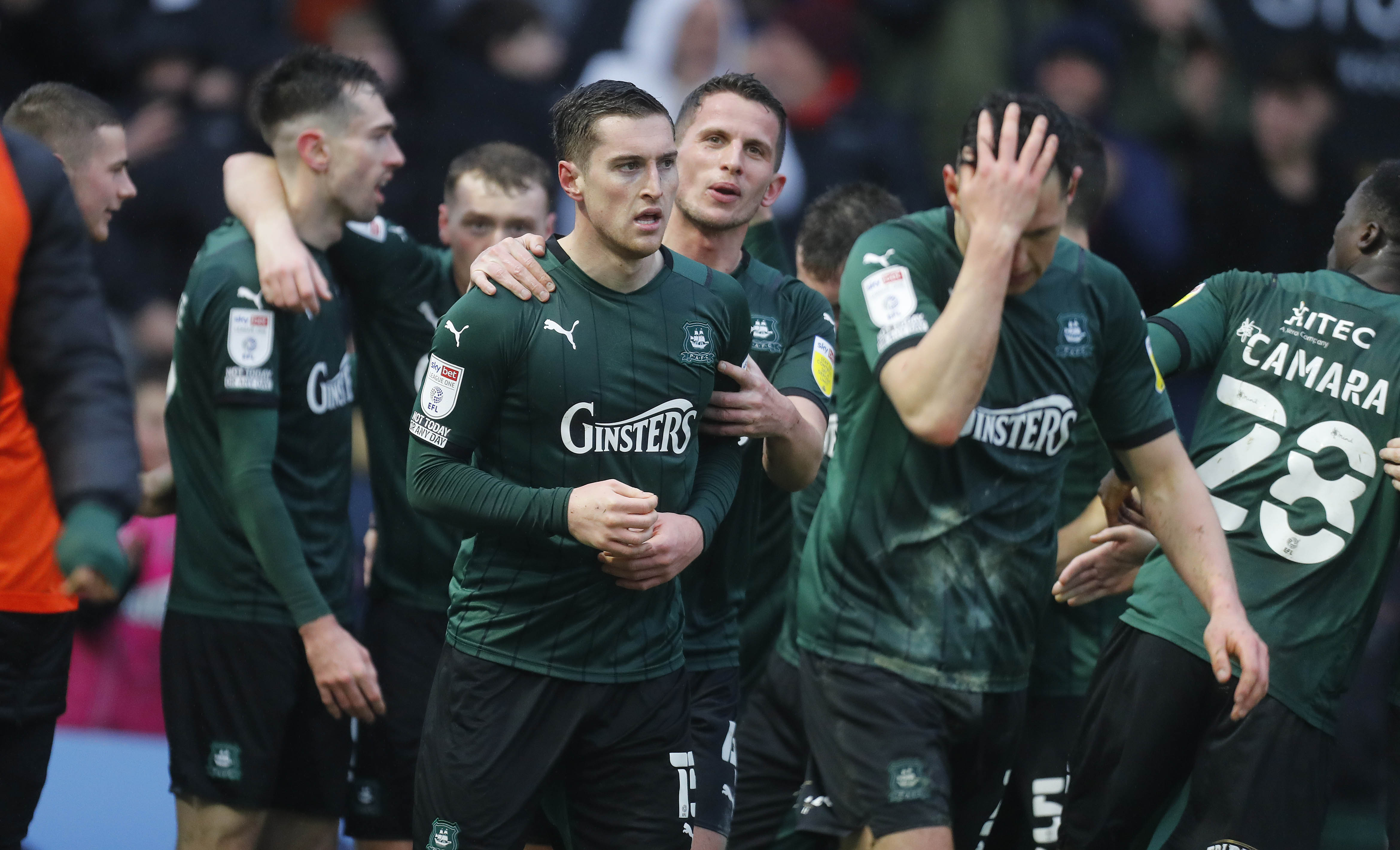 On a damp and difficult afternoon, a Conor Grant thunderbolt lit up Home Park and left the near 15,000 crowd dreaming of sunnier days ahead.

The wing-back’s sumptuous strike just after the hour settled a stop start affair, securing Argyle’s third successive win in Sky Bet League One, ensuring that they climbed back into the play-off places.

Managing just his third home game in 12 since taking over from Ryan Lowe, Steven Schumacher made five changes from the team that started the 4-1 win at Crewe Alexandra, with wing-backs Joe Edwards and Grant, midfielder Jordan Houghton and Luke Jephcott returning to the side. James Bolton was also recalled against his former side, with Dan Scarr’s ever-present league streak ended due to injury. For the Shrews, former Pilgrim loanee Tyrese Fornah started in midfield.

The Greens set about the challenging task of breaking down one of the most miserly outfits in the division with their usual passing style, and a flowing move from back to front eventually culminated in a low drive from Panutche Camara on the edge of the area, but Marko Marosi got down well to hold it.

At the other end, a searching left-footed cross from George Nurse was partially cleared by Bolton, with Macaulay Gillesphey reacting quickest to bravely block Dan Udoh’s fierce follow-up effort.

Next it was Argyle’s turn to probe the back line, with Grant looping a hanger to the far post, but Camara, sandwiched between two Shrews defenders, could not get the final touch.

A flurry of Argyle corners followed, with an array of training ground combinations attempted to pick the Shrewsbury lock. First, Houghton picked out Edwards on the edge of the area, only to see his volley blocked, before Grant and Danny Mayor combined for a short routine, with the former crossing to Ryan Hardie, whose flick-on was straight at the ‘keeper.

And closer they came. On 20 minutes, Grant went direct, whipping a delicious ball in for Houghton to flick goalward at the near post. The midfielder’s header would have dropped in, but for Marosi’s tidy tip over the crossbar.

For all of the Shrews’ defensive prowess – they had conceded just four goals in 10 league games before their trip to Home Park – it felt that an Argyle goal was not far away, but the Shrews, to their credit, battled back to quiet another bumper Home Park crowd.

A booking apiece for Houghton and Josh Vela underlined a staccato period where both sides struggled to assert themselves, and the Greens were indebted to a smart stop from Cooper to deny Matthew Pennington’s header as the match reached the interval.

Argyle came out in the second half with renewed vigour, and with the majority of the crowd barely settled after their half-time pasty, Mayor came inches away from opening the scoring. Dancing into a central position, 20 yards out, he twisted his man left and right before curling a long-range effort at goal. Marosi, in full flight, looked grateful to see it whip around the post.

They would come even closer minutes later. A brilliant back-to-front counter saw Camara slot Jephcott into the right channel. With the Shrews back line stretched, Jephcott looked to have teed up his strike partner Hardie for the easiest of finishes, but Pennington somehow got back in time to toe poke the squared ball narrowly wide of the near post.

As in the first half, the visitors did their best to hamper Argyle’s momentum. A fracas in the box delayed the resultant corner, from which an incensed Camara was booked. On 60 minutes, Camara’s frustrating period continued, as he went down between Shrews markers and saw his protests for a penalty waved away.

The edge for Camara, and an increasingly boisterous Green Army, was softened on 62 minutes, though, as Argyle took a hard earned lead.

Once again finding some space down the right, Jephcott sent a low cross into the box. With visiting defenders committed to covering the six-yard area, nobody spotted the onrushing Grant, who rifled a thumping drive into the roof of Marosi’s net at the Devonport End.

Frustrations had not dissipated entirely, though, and Argyle fans and coaching staff were up in arms alike when Houghton looked to have sent Hardie clear with a superb ball over the top. Latching onto the pass, the striker appeared through, before taking a tumble after feeling contact from Ethan Ebanks-Landell. Referee James Oldham, with an excellent view of the incident, waved play on.

With their clean sheet breached, the visitors changed tack in search of a response, and a deep free-kick almost yielded an equaliser, when Cooper’s spilled catch rebounded invitingly in the box - but Argyle forced it clear. Sensing that an opportunity to exploit gaps on the break, Schumacher introduced the pacy duo of Niall Ennis and Jordon Garrick up front.