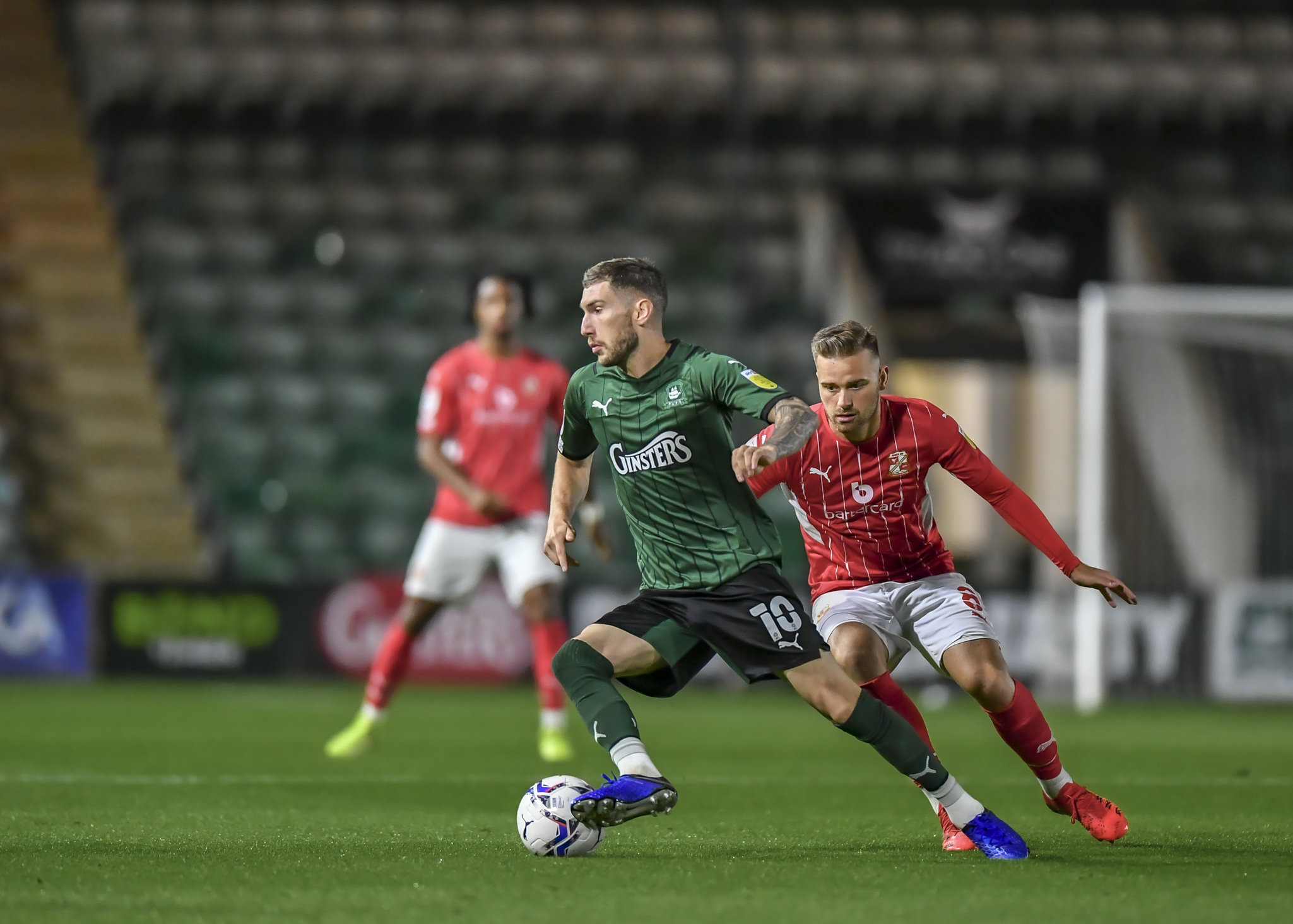 Argyle fell to a second defeat in the Papa John’s Trophy after two late goals from a speedy Swindon earned the Robins a 3-1 win.

A first goal in Green for Kieran Agard had levelled a Macaulay Gillesphey own goal in the first half and the Pilgrims created plenty of opportunities to move ahead, but Swindon won it through strikes from Jayden Mitchell-Lawson and Harry McKirdy.

Argyle boss Ryan Lowe made seven changes from the weekend win over Burton, with Ollie Tomlinson in defence and Danny Mayor continuing his recovery from injury in midfield. The Pilgrim bench contained two 15 year-olds, Caleb Roberts and Freddie Issaka.

A wonderful pass from Mayor created the first chance, headed in at the far post by Rhys Shirley, but the offside flag went against the Greens in a very tight call. The Robins responded with a skidding drive from distance by Ryan East, palmed clear by Callum Burton.

A super interception from Gillesphey was just enough to divert a threaded pass to Harry Parsons, who was unable to clip the loose ball beyond Burton, as the Robins enjoyed a bright spell in the game.

The reward arrived on 20 minutes when a fizzing cross from Parsons cannoned into Gillesphey at the near post and there was little he could do to prevent the ball ricocheting into the Argyle net.

A surge from Joe Edwards prompted the ideal reply, feeding the ball wide to Gillesphey, who made instant amends with a curling cross to the near post for Agard to prod out an instinctive boot and the effort squeezed past Swindon ‘keeper Lewis Ward.

It was a classic striker’s finish and Pilgrim momentum grew with a spell of controlled possession, culminating in a wonderful defence-splitting pass from Mayor to Agard, who just steered his shot inches wide.

Gillesphey continued his evening of assists with a lovely ball into the channel for Mayor, to cut back from the touchline and a dinked cross that required a scrambled clearance from the Robins.

Mayor then pulled the trigger himself, curling a beauty toward the top corner that brought out the best from Ward in tipping wide. The next Mayor effort, this time fired low after a darting run, produced an equally impressive riposte from the Swindon custodian.

Mayor was enjoying his evening, completing the first half with a delightful cross that caused panic in the visiting defence, with Panutche Camara lurking dangerously. The Mayor masterclass came to an end at half-time, with trainee Will Jenkins-Davies his replacement.

Incisive play from Adam Randell sparked life into a slow start to the second period, winning the ball in midfield and lashing a long-ranger narrowly over. A shot from Mitchell-Lawson was the reply, bundled wide at the near post by Burton.

Another delightful pass from Gillesphey picked out Edwards in the penalty area and he was just about prevented from getting a shot on goal by the retreating Robins. Ricky Aguiar came back with a weaving run and shot, repelled by the fists of Burton.

Jordon Garrick replaced Agard midway through the second period and, with three Swindon changes, the game had become a little disjointed.

The Robins were first to find some renewed impetus, snatching the lead with a swift break from an Argyle corner and Mitchell-Lawson kept his composure to slot past Burton from the right channel.

Ryan Hardie replaced Shirley for the closing minutes but everyone inside Home Park was soon gasping at an outrageous curling effort from distance by McKirdy that struck the post.

McKirdy had better luck moments later, sealing the Swindon win with a close-range finish following a surge through the middle from Rom Critchlow.