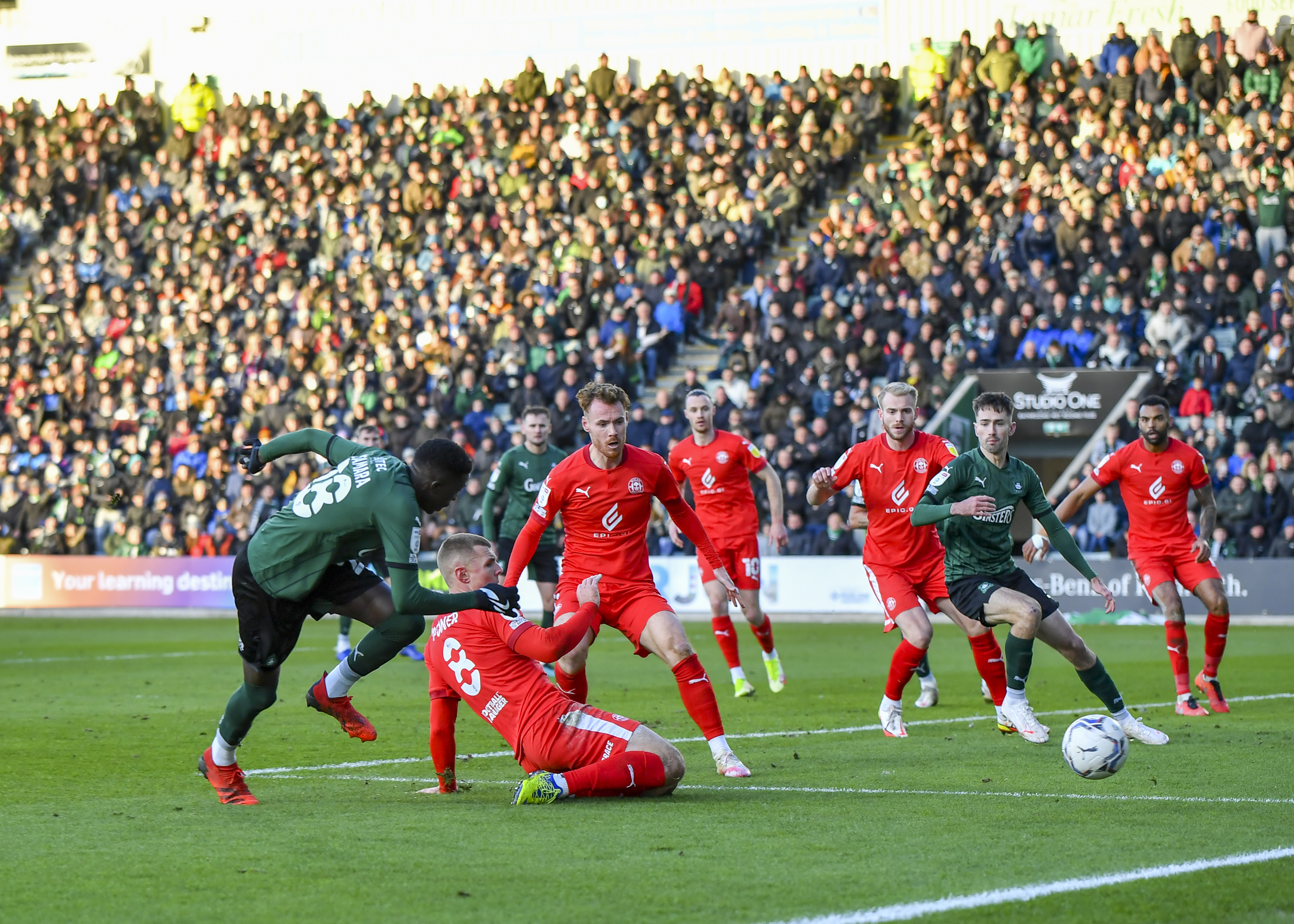 A last-minute goal from Callum Lang condemned Argyle to a harsh defeat on a cold and windy day at Home Park.

A tight game opened up with an opener from Wigan in the first period but the visitors were pegged back by a sumptuous Danny Mayor leveller just before half-time. Both sides were heading toward a hard-fought draw when Lang popped up with the decisive moment.

Argyle boss Ryan Lowe made just one change from the midweek reverse against Wycombe, Macaulay Gillesphey replacing the injured Brendan Galloway, while Wigan manager Leam Richardson opted to make four alterations to the side that drew 2-2 at Cambridge.

In front of a sell-out home crowd at the Theatre of Greens, Luke Jephcott found room for a shot on three minutes, which he steered wide without testing Wigan ‘keeper Ben Amos.

The Latics responded with a clever pass inside the wing-back by James McLean but the shot from Thelo Asagaard was thankfully sliced way off target, as both sides struggled to find their rhythm in blustery conditions.

A slick change of pace and direction from Mayor gave him a run at the Wigan back four but the 20-yard drive was blocked by Curtis Tilt.

The game stopped for a minute’s applause on 18 minutes, beautifully observed by all players, coaches and supporters, as a mark of respect following the tragic loss of Plymouth teenager Bobbi-Anne McLeod.

The football resumed with responsible defensive work from Panutche Camara, chasing back to break up a Wigan attack before the ball was returned to McLean for a tame shot that was comfortable for Mike Cooper.

Camara’s was soon back in the attacking third, selling a clever dummy to set up a half-volley, bravely blocked by a Wigan head. The subsequent corner again fell to Camara for another surge that forced more last-ditch defending from the visitors.

Gradually, Argyle had taken control of the territorial battle, peppering the visitors with a succession of corners, with Dan Scarr a constant threat in the opposing penalty area.

Unfortunately, Wigan broke for the opening goal on 35 minutes, breaking down the left through Lang and the ball bobbled past Cooper for Asagaard to cut back to Keane for the easiest finish from three yards.

In reply, great play between Jephcott and Ryan Hardie down the right created space for a low cross to Camara, who opted not to shoot from 12 yards, flicking a pass to Conor Grant but his effort was charged down.

The Greens then made a change to their forward dynamic, introducing Jordon Garrick for Jephcott. The new man immediately picked out a pass for Mayor on the edge of the box and his strike was superb, rifled into the top corner after an excellent first touch had set up the chance.

The balance of play more than warranted an Argyle leveller and it was a top-quality goal to warm the Green Army through half-time.

Wigan tried to take advantage of the wind in the first minute of the second half with a clipped cross that very nearly found the run of Lang, quickly followed by a low Tom Naylor drive sent fizzing wide.

Terrific endeavour from Hardie earned Argyle a corner in response and the ball from Grant eventually found Camara for a shot charged down, but the Pilgrim momentum continued with more fine work down the left and another searching low cross from Grant nearly picked out Garrick at the near post.

Wigan came back with a break from Lang and his cut back toward Asagaard was just about cleared by a combination of Cooper, Scarr and James Wilson, with McLean poised to score.  Skipper Tendayi Darikwa then steered a 20-yarder wide for the visitors.

The dancing feet of Mayor conjured room for a Camara effort deflected inches past the far post, as Argyle turned to Ryan Broom for the final stages, with Mayor making way, followed Kieran Agard on for Hardie.

Visiting substitute Stephen Humphrys demonstrated his prowess with a rising drive that forced a super save from Cooper but there was no stopping the Wigan winner in the last minute, Lang expertly firing a low finish into the far corner.