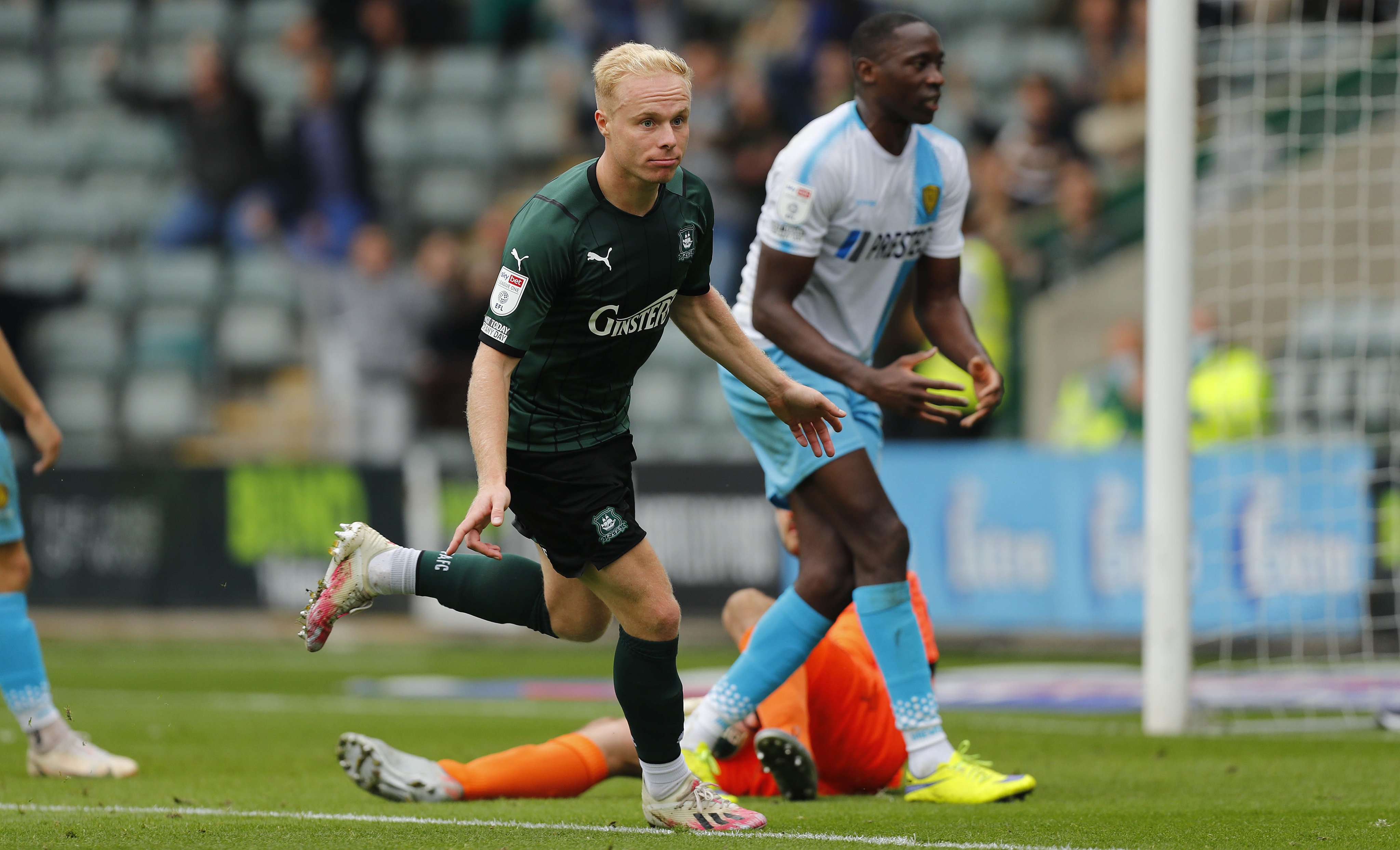 The Pilgrims extended their unbeaten run to 11 league games at the same time and thoroughly deserved the victory, despite a second-half Burton consolation from Lucas Akins keeping the Greens honest in the last half-hour.

In the opening exchanges, determined work from Garrick, feeding off a Jordan Houghton pass, led to a bouncing delivery and Agard very nearly made the perfect introduction, hooking his volleyed effort narrowly wide.

A threaded pass from Broom then picked out Ryan Hardie for a sharp turn and sumptuous curling chip that had Ben Garrett beaten, only for the crossbar to rescue the Burton stopper.

Argyle’s deserved opener arrived on the quarter-hour, when a Garrick cross was half-cleared to Grant on the edge of the area and he executed the perfect technique to fizz a low half-volley beyond Garrett into the bottom corner.

Grant was back involved midway through the first half, dipping a lovely pass into space for Hardie to find Broom and the ball was moved into a central area for Panutche Camara, but his effort skewed wide.

A dazzling run from Garrick created space for a pass wide to Grant and his curling cross to Hardie was headed into the arms of Garrett, as Argyle maintained their dominance.

The only problem for the Pilgrims was the absence of a second goal to underline their control of the game, as Camara volleyed wide and Dan Scarr nodded over from a Grant corner.

Goalkeeper Mike Cooper livened up his quiet afternoon with a catch and launch to release Hardie just minutes before half-time. Hardie seared clear of the Burton defence and cut back a pass for Broom to stroke the second goal into the corner of the net.

It was a lead Argyle completely warranted and a special semi-assist from Cooper, who made it happen with exceptional alert play, followed by the oozing confidence of Hardie nearly adding a third before the interval, dancing inside from the left for an effort deflected wide by the beleaguered Brewers.

Burton tweaked their system at half-time in an understandable attempt to change the pattern but there remained a satisfying calm in Argyle’s control of proceedings.

Broom, lively as ever, lashed a deflected shot wide from 25 yards but Argyle were rocked on the hour with a Conor Shaugnessy pass fed into the feet of Akins, who turned cleverly and slotted a left-footer inside the far corner.

From a game drifting to a seemingly inevitable Pilgrim win, the Brewers were suddenly galvanised and Argyle needed to respond. Broom took on the challenge with a pass wide to Grant and his low cross led to successive efforts from Camara and Agard, just about scrambled clear by the visitors.

The Burton threat was, however, a lot more prominent, and good near-post defending from Scarr was very much needed on 70 minutes. Skipper Edwards replaced Garrick for the closing stages.

Danny Mayor was the next change, greeted with huge applause after a prolonged absence, with Camara making way. Burton, meanwhile continued to probe for a chance, but Argyle remined the bigger threat through Broom, Hardie et al.

Despite the potentially precarious scoreline, the Greens enjoyed relative comfort in seeing out the three points, with Burton’s best chance hit into the side-netting by substitute Daniel Jebbison.

We are top of the league.