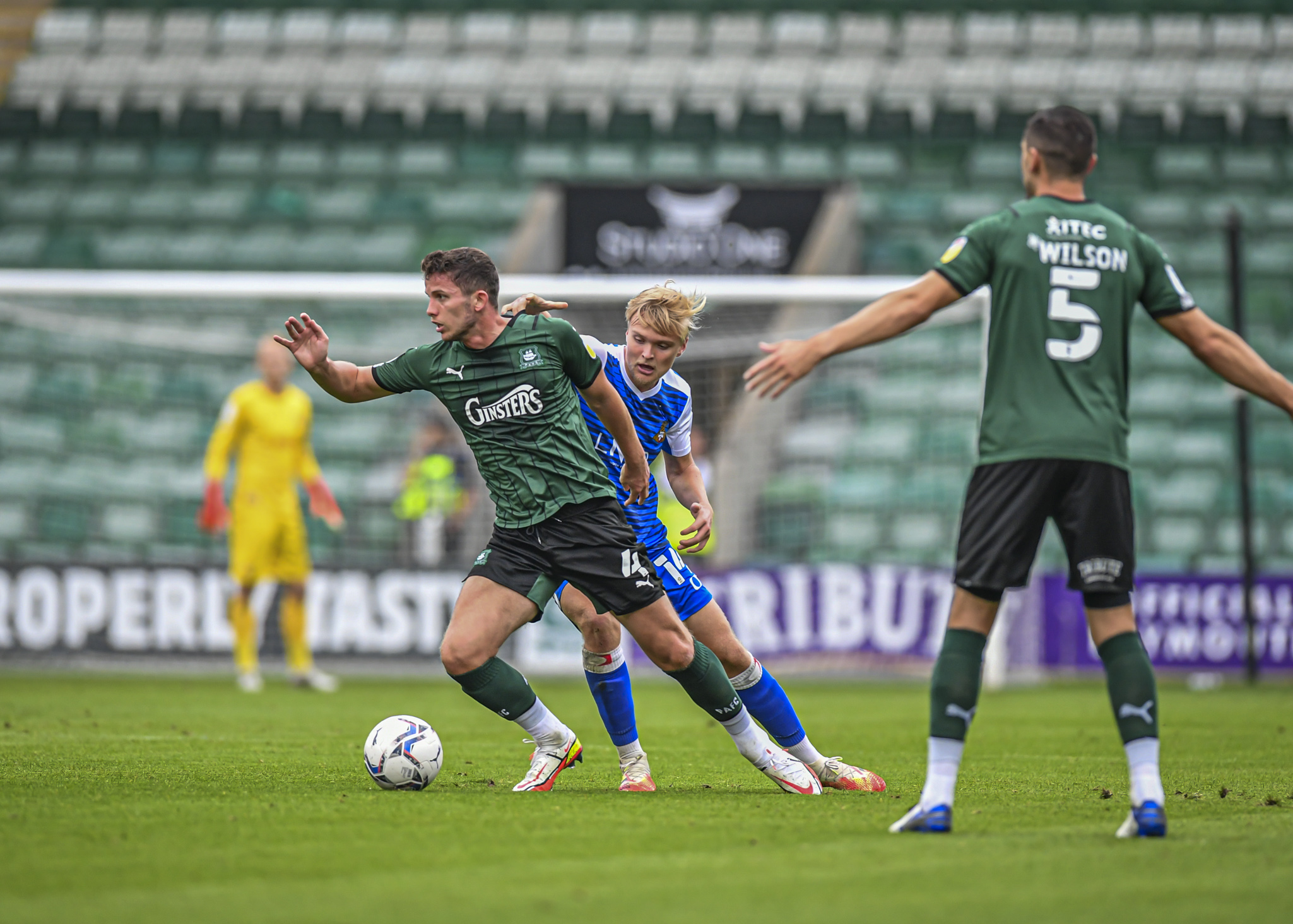 Two penalties, the second converted in the final minute, saw Argyle recover from a setback just after half-time to bag all three points at home to Doncaster Rovers.

Despite controlling possession and territory, the Greens fell behind to a Jordy Hiwula effort on 54 minutes but Luke Jephcott kept his nerve for the first penalty, and Conor Grant doubled that composure with a match-winning spot-kick in stoppage time.

Argyle manager Ryan Lowe stuck with the same side that drew 2-2 at Portsmouth in midweek, while his Donny counterpart Richie Wellens made one change from the weekend win over Morecambe, Tiago Cukor coming in for Rodrigo Vilca.

The visitors won a couple of early corners, well marshalled by Dan Scarr and his defensive comrades, with the attacking unit finding a spark when Joe Edwards switched a lovely pass to the opposite flank for Conor Grant. The ball was worked back for a Jordan Houghton effort deflected into the arms of Swedish goalkeeper Pontus Dahlberg.

Houghton was pulling the Pilgrim strings, floating another fine pass wide for Grant to swing over a cross punched clear by Dahlberg with Jephcott lurking. The same Argyle trio combined again on 17 minutes but Jephcott’s shot was charged down.

The Greens worked the ball back to Grant just inside the area for a half-volley parried clear by the Doncaster custodian. Argyle were piling on the pressure but a stretching tackle by Tommy Rowe prevented Panutche Camara from reaching another dangerous ball over the top.

A delicious pass from Brendan Galloway conjured the next opening, with Jephcott wrong-footing his defender with a super first touch but credit to Dahlberg for getting enough on the attempted dink to keep Doncaster level.

Rovers responded with a surge from Matt Smith and Joe Dodoo, turned around for a corner by the alert Edwards. A header under pressure from James Wilson ensured Mike Cooper remained well protected in the Argyle goal.

The final chance of the half fell to Ryan Hardie, released by Camara from a quick break, but a combination of Dahlberg and Tom Anderson managed to crowd out Argyle’s leading scorer. Dahlberg then palmed wide a Grant shot from distance after good work by Ryan Broom.

Broom was back in the action on 49 minutes, laying a low ball across for a Camara shot deflected safely to Dahlberg, Doncaster broke immediately and Cooper was grateful to see a Hiwula shot steered wide.

Hiwula found his mark from the next attack, controlling a clipped pass into the left channel and prodding past the stranded Cooper for a Doncaster lead.

Argyle very nearly fell two behind on the hour, when Hiwula raced clear and skipped past Cooper, but Wilson did a terrific job in covering his goalkeeper to head clear an otherwise certain goal.

The Pilgrims responded to the setback with a lift in tempo and a tremendous move culminated in a Kyle Knoyle foul on Broom, and a clear penalty. Jephcott grabbed the responsibility and just about squeezed his shot into the corner, despite a big hand from Dahlberg and thanks to a welcome bounce off the inside of the post.

Macaulay Gillesphey for Galloway was the first Argyle change, as the Greens looked to crank up a late push for three points. The fresh legs of Jordon Garrick came on for Hardie in the final ten minutes.

Broom curled a beauty toward the top corner but Dahlberg was equal to the task, and again from a Jephcott shot toward the near post. Doncaster carried their own threat with an Aidan Barlow header deflected just wide by Wilson.

Kieran Agard for Jephcott was Argyle’s final roll of the dice and he was soon brought down in a horror moment for Dahlberg, dropping a Gillesphey cross and then hauling down Agard in his desperation to make amends.

Jephcott was on the bench, handing last-minute penalty duties to Grant and he stroked a calm spot-kick into the corner for a hard-fought three points.