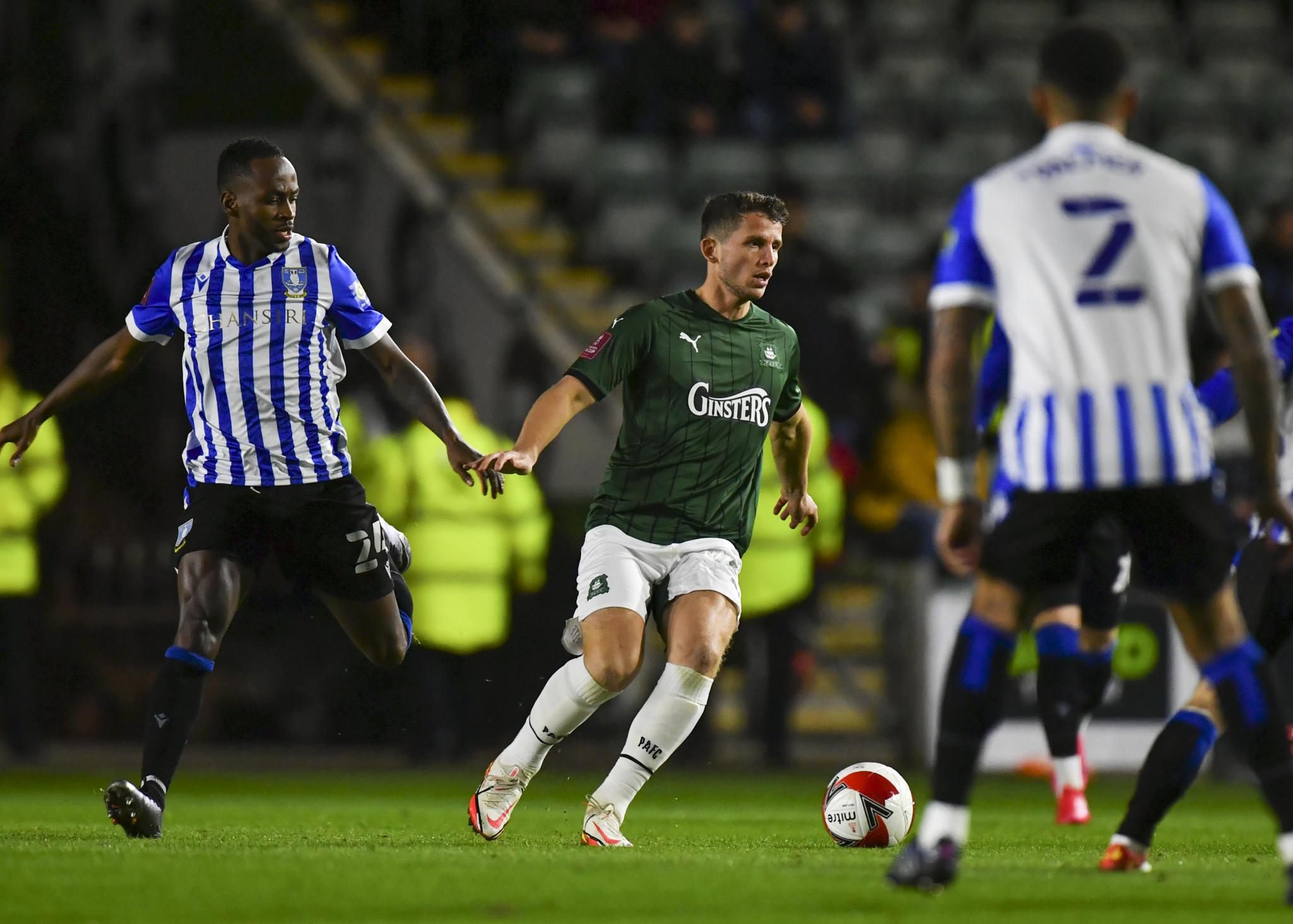 A fine Jordon Garrick double, either side of Ryan Hardie’s second goal in as many games, saw Argyle cruise beyond Sheffield Wednesday and into the second round of the Emirates FA Cup.

After a tentative opening, the Greens clicked into gear to secure a repeat of their 3-0 Sky Bet League One victory over the Owls back in September, setting up a televised second round tie away at Sky Bet League Two side Rochdale.

Argyle manager Ryan Lowe underlined the importance of progression in the competition by selecting the same side that put four past Accrington Stanley a few days earlier. A strong starting XI was further bolstered by the return to the extended bench for senior figures Danny Mayor and George Cooper.

Wednesday, meanwhile, made three changes from their 1-1 draw with Gillingham at the weekend, with Jaden Brown, Dennis Adeniran and Saido Berahino coming into the side in place of Marvin Johnson, Theo Corbeanu and Olamide Shodipo.

Argyle brushed the Owls off when the two sides met at Home Park in league action earlier this season, but Darren Moore’s side have certainly made progress since then, arriving at Home Park 10 games unbeaten, and their confidence was evident as they generated the first clear opportunity of the game.

A measured right-wing ball in behind searched for Berahino, but Dan Scarr’s crucial touch took it away from him. Reacting quickest, Florian Kamberi lashed a searing volley at goal from 10 yards, but Mike Cooper stood his ground to pull off a tremendous reflex save.

The Greens hit back through the unlikeliest of sources, as defender James Wilson made a marauding run unchecked into enemy territory, before blasting goalwards from the edge of the area, but his effort was blocked.

Kamberi’s initial chance sparked a flurry of activity after a tentative opening, and Brown was next to try his luck for Wednesday, firing towards the far corner from the edge of the area, with Scarr bravely putting his head in to deflect it wide.

Wednesday had matched the Greens for the opening stages of the cup clash at Home Park, but their notable attacking intent left them susceptible to the Pilgrims’ pace on the break.

Having been forced back by the Argyle defensive line’s relentless pressing, Brown was dispossessed by Panutche Camara, who sent Hardie clear on the half-way line.

Having drawn two defenders to his run, Hardie fed Camara in the right channel, and the tireless midfielder’s clipped centre found Garrick unmarked on the edge of the area. With Owls defenders trailing in his wake, the Swansea City loanee took a touch to set himself, before smashing an unstoppable effort beyond Joe Wildsmith and into the far corner.

From another devastating breakaway, Argyle nearly had their second. Camara evaded a full-blooded lunge from Lewis Wing to surge towards the half-way line, before laying on for Garrick to race clear. The goalscorer slotted Conor Grant into the area with a through ball, but the wing-back’s first time drive was palmed away by Wildsmith.

Despite losing possession for Argyle’s opener, the majority of Wednesday’s play had come through left wing-back Brown, and he came closer than anyone to restoring parity on the half hour, with his low cross from the left skipping across the face of goal, requiring Cooper to claw away at the far post, with Wilson reacting quickest to hack it away.

Argyle doubled their advantage minutes later. Once again, the visitors were robbed of possession on the edge of their own area, and Camara fed Hardie inside the box. The striker’s exquisite footwork separated him from his marker, and he slotted coolly beyond the onrushing Wildsmith before celebrating gleefully in front of Zoo Corner.

Tails up and purring, Grant fired a trademark howitzer at goal from range almost from the restart, but Wildsmith was equal to it.

Having seemingly broken Wednesday’s resistance, the Greens nearly offered the Owls a route back into the tie, with Barry Bannan latching onto a loose pass on the edge of the Argyle box. He fed Kamberi, who saw another half-chance go by as his deflected effort sailed over Cooper’s crossbar.

The introduction of tricky Theo Corbeanu shortly after the interval posed a different problem the Argyle defence, but, in the end, it was the pace of Garrick that put the game beyond any reasonable doubt.

Chasing Macaulay Gillesphey’s measured ball into the channel, the forward got the better of the backline. Seeing no other option, Wildsmith raced off his line to grab the ball, only to carry it outside of the area with his momentum.

In a moment’s panic, he relinquished the ball, and Garrick pounced before measuring his strike beyond the despairing leap of Chey Dunkley on the goalline. While Argyle players lapped up the atmosphere in front of a raucous Devonport End, Wildsmith received a booking from referee Christopher Sarginson for handling outside the box.

It nearly got worse for Wildsmith, whose blushes were spared after dropping the ball in front of substitute Kieran Agard for a simple tap-in following a corner, only for the referee to mercifully award the ‘keeper a free-kick.