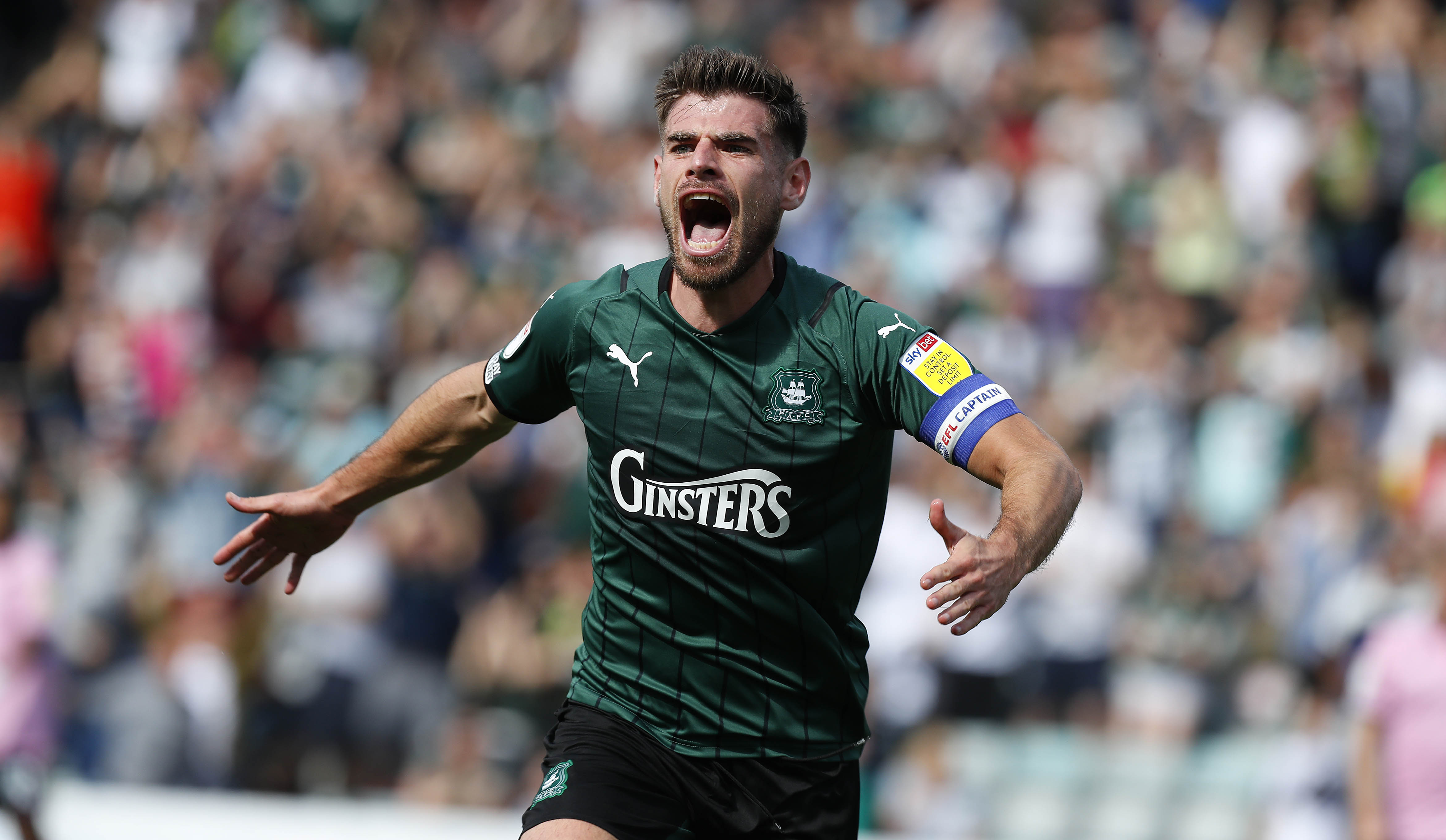 The biggest crowd at Home Park since New Year’s Day 2020 were treated to an outstanding display from Argyle in a superb 3-0 victory over promotion-chasers Sheffield Wednesday.

Goals from Joe Edwards and Dan Scarr, an inspired overhead kick and the latter an emphatic volley from a set play respectively, gave the Greens a deserved lead after a thoroughly dominant opening period. A mature and resilient second-45 stifled any hopes of an Owls fightback, before substitute Ryan Law capped a sweet afternoon with his first professional goal.

With two weeks rest courtesy of international break, Argyle manager Ryan Lowe opted for one starting change from the last league encounter, a 1-1 draw with Fleetwood Town at Home Park. In came central defender James Wilson after serving a three-match suspension, with Macaulay Gillesphey dropping to the bench – which notably carried more experience in the form of the returning playmaker Danny Mayor and new signing Kieran Agard.

The hotly anticipated fixture with the Owls welcomed the largest attendance at the Theatre of Greens since New Year’s Day 2020, when Argyle hosted Swindon Town in a table-topping Sky Bet League Two clash.

Much has changed since then, and the strength of the Owls’ squad was testament to the distance travelled by the Pilgrims in those 18 months, with the visitors naming a side full of Championship-level experience throughout, and former £10m man Saido Berahino on the bench.

An electric atmosphere awaited both sets of players, and the Greens responded to the challenge, with the lung-busting runs of midfield duo of Panutche Camara and Ryan Broom setting the tone and stretching the visitors early on.

Though the decibel levels were heightened in the early exchanges, nothing quite matched the noise on seven minutes, when a moment of pure inspiration gave Argyle the lead.

Conor Grant’s trickery on the left put his marker on the floor, before a dangerous ball in called Bailey Peacock-Farrell into action. The visitors’ highly-rated stopper could only parry the cross under pressure from a leaping Camara, and Argyle skipper Joe Edwards, back to goal, performed an acrobatic scissor-kick that saw the ball loop beautifully past the stranded goalkeeper and into the back of the net.

Not content with their one-goal lead, and backed by a raucous crowd, the Greens surged once more down the left. Grant, architect of so much of the Pilgrims’ good work early on, fed Broom into the channel, and his cut-back and cross found Camara on the penalty spot, but the midfielder’s side-footed volley drifted narrowly wide of the near post with Peacock-Farrell rooted.

As the first half reached its mid-way point, the only disappointment for Lowe’s side was that they had not placed themselves out of sight.

After an exhilarating half an hour, the Owls showed their first signs of life. First, Sylla Sow showed pace and skill to get away from Brendan Galloway and flash a fiery delivery across the face of goal, before Liam Palmer fired over the bar from long range. As excellent as the Greens had been in the opening half, the flurry of attacks served as a reminder that they couldn’t afford to let their standards drop.

Then, right on cue, Argyle doubled their advantage. In trademark fashion, Camara snatched possession, burst through midfield traffic and looked to be heading clear, only to be cynically scythed down by George Byers, who was booked for his trouble.

With training ground precision, Grant curled the resultant free-kick to the far post, where Dan Scarr was waiting to gleefully dispatch the volley to send the Pilgrims roaring into the interval with a merited two-goal cushion.

Owls manager Darren Moore opted to introduce Olamide Shodipo for Jack Hunt at half-time in search of a response, but Argyle settled into the second half well, retaining possession and stifling hopes of an early fight-back.

In fact, it was the Greens who looked likeliest, with Camara and Broom both breaking from midfield at pace to cause Wednesday problems, with the latter drawing a foul from Sow on the edge of the area that saw the visitors’ forward booked.

Having built up some pressure on the Owls’ back-line with a series of set plays, Argyle nearly found a third, when Jephcott turned his marker and surged into the box, before laying a low ball across the face of goal that Hutchinson looped onto the roof of his own net.

On the hour, the Owls cycled through their options from the bench, with Theo Corbeanu and Berahino introduced in an attempt to disrupt the Greens’ rock-solid defensive structure. The former tried his luck from range, but corked his effort well wide of Mike Cooper’s near post.

While the visitors were limited to long-range efforts for the most part, Argyle continued to cause problems. The tireless Broom threaded a brilliant through ball in behind for Hardie to chase. The striker took a touch to square the angle, before firing low at goal. Peacock-Farrell got a touch to drag it narrowly wide of goal, with Jephcott lurking menacingly nearby.

At the other end, Wednesday generated their best opening of the match. Front-man Lee Gregory drifted wide to receive the ball on the counter, before delivering a pinpoint cross to Corbeanu at the far post. Presented with the option to head at goal, or lay off for an on-rushing team-mate, the Wednesday man appeared caught between both, chesting almost apologetically into the path of Jordan Houghton, who cleared.

With the clock running down, the Owls saw another fleeting opportunity pass them by. Marvin Johnson hung a deep cross from the left to be met by captain Barry Bannan, who headed wide of Cooper’s far post.

The Pilgrims’ stopper would finally be called into meaningful action with the clock approaching 90 minutes, as a corner eventually worked its way to the lively Corbeanu, who fired fiercely at goal from close range, before the Argyle defence stood bravely to repel the efforts on the rebound.

It was as close as Wednesday would come - but Argyle capped a thoroughly satisfying performance with a third in stoppage time, as substitute Law latched onto Broom's through ball on the counter to beat Peacock-Farrell at his near post.