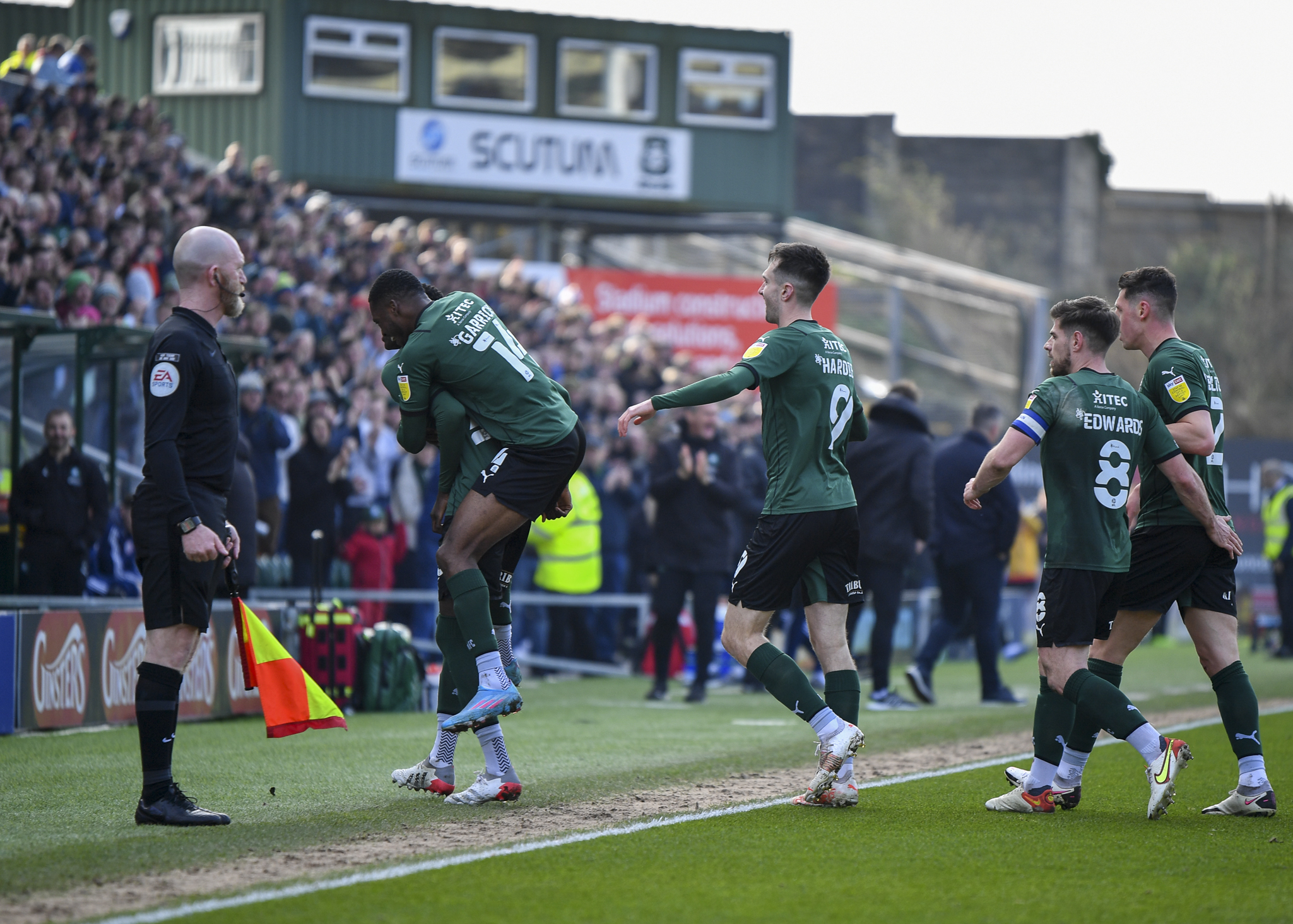 Argyle’s fifth straight win in Sky Bet League One was also their biggest victory of the season, as Accrington were swept aside by a powerful Pilgrim display.

Panutche Camara and skipper Joe Edwards provided the half-time cushion and Niall Ennis effectively sealed the points with a super finish on 63 minutes. The dismissal of Stanley goalkeeper Toby Savin confirmed the victory, with Ryan Hardie’s 19th of the season underlining a dominant display.

Argyle manager Steven Schumacher made two changes from the midweek win over Portsmouth, Conor Grant returned from injury to replace Steven Sessegnon and Jordon Garrick came in for Luke Jephcott.

Accrington earned a fine draw at Sheffield Wednesday in midweek but found themselves under pressure in the early stages, as the Greens looked to control proceedings with some patient passing at a blustery Home Park.

The visitors broke those shackles with a Sean McConville corner whipped over for Michael Nottingham to rise highest and head a major warning against Mike Cooper’s crossbar.

Within two minutes, Argyle were in front. Danny Mayor clipped in an inviting cross from the left and the ball ricocheted off the thigh of Garrick for Camara to lash home from eight yards.

It was not the prettiest of goals but well taken by Camara, who, along with his team-mates, breathed a huge sigh of relief from the restart, as Colby Bishop found acres of room behind the Pilgrim defence but, with the goal gaping, he opted for a square pass intercepted by the recovering James Wilson.

In an incredibly open game, Accrington were refreshingly happy to throw men forward but that did present Argyle with the chance to counter, with Camara marginally over-hitting a pass to Hardie from one quick break.

Harry Pell headed narrowly over for the visitors, as Accrington continued to rack up the corner count, Wilson digging out a super header from his own bar after another curling cross from McConville on 28 minutes.

The Pilgrims regained control with an outstanding second from Edwards. The skipper cut in from the right for a dazzling run and pass wide to Conor Grant, who returned a low cross that bounced nicely for Edwards to fire an instinctive left-foot half-volley beyond Savin and into the far corner.

Hardie took the initiative next, waltzing into the box for an angled shot blocked by Ross Sykes to end a fine first half. Edwards started the second in similar fashion, forcing the ball down the line for Garrick to cross low toward Camara, who was closed down on the brink of shooting.

The imperious Jordan Houghton stepped out of midfield duties for a fizzing free-kick tipped over by Savin, while Accrington responded with a low effort from Rosaire Longelo saved by the legs of Cooper after the ball had broken to him in the right channel.

Cooper did even better just before the hour, diving full-length to his left for a tip wide from Ethan Hamilton’s 25-yard rocket. Argyle then turned to the bench, introducing Ennis for Garrick.

The substitute took precisely three minutes to make a tremendous impact, turning beautifully on a Wilson pass before rifling a fantastic low strike back beyond the stranded Savin.

It was an emphatic finish from Ennis and a healthy three-goal cushion for the Greens, as Camara left the pitch to rapturous applause, with Adam Randell the readymade replacement.

Cooper protected his clean sheet from a deflected McConville shot and the afternoon took a terminal twist for Accrington when Savin was sent off for denying Hardie a clear goalscoring opportunity.

Teenage goalkeeper Liam Isherwood came on for his professional debut and, to his immense credit, held on to a curling Randell effort from the resultant free-kick. Argyle were having fun, as Hardie shaved the outside of the post with a deflected strike.

Randell was next to have a pop with another low effort that flicked off an Accrington leg before flying wide, swiftly followed by a sweet strike from Edwards that rattled off the outside of the post.

There was a happy inevitably about the Pilgrim fourth, as Mayor jinked inside for a shot glanced into the bottom corner by the head of Hardie. The outstanding Mayor was then replaced by Ryan Broom.

Aside from a rising Randell drive tipped over, the Pilgrims calmly played out the closing minutes with thoughts already firmly set on the midweek visit of Cheltenham.