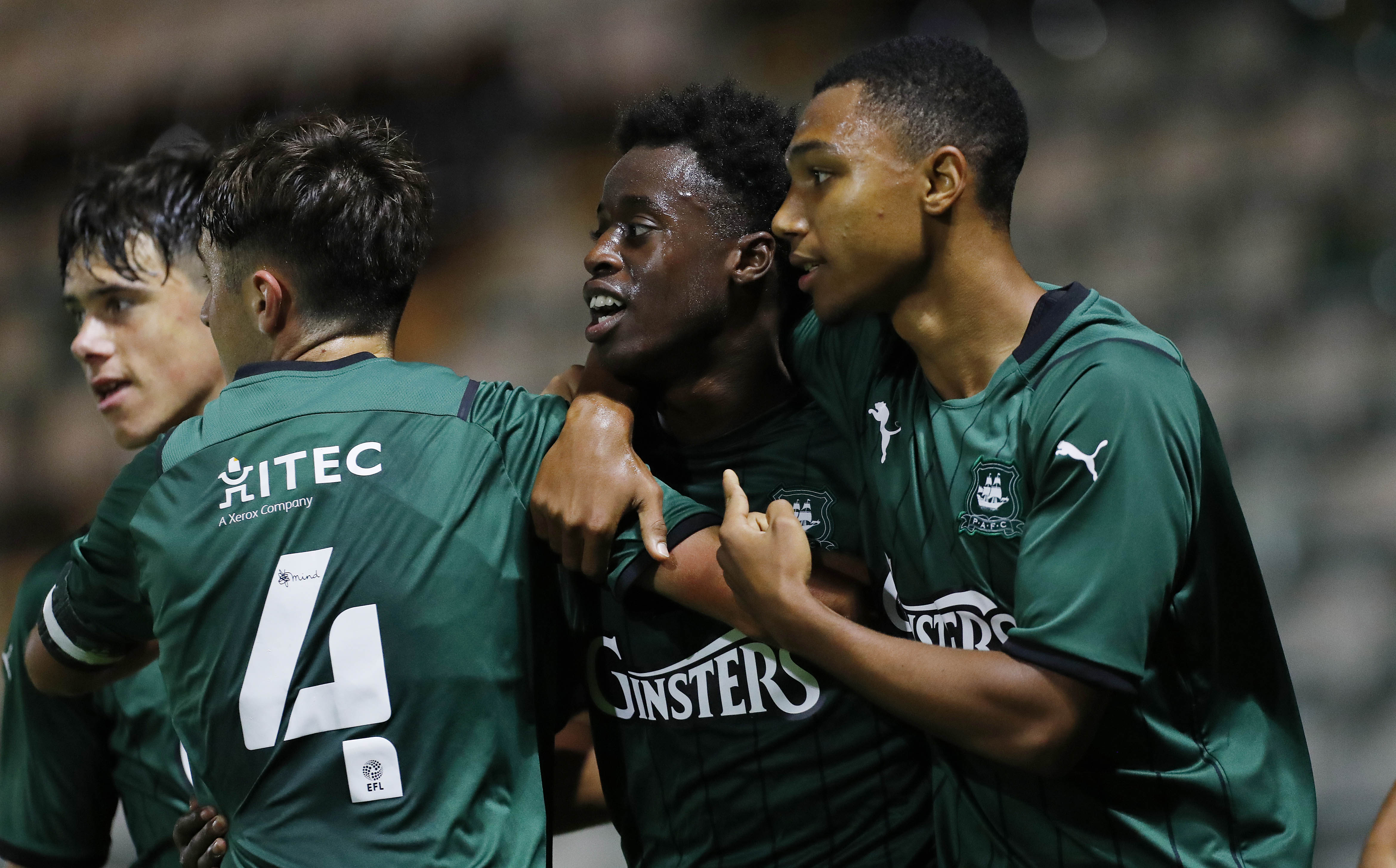 A goal in each half saw Argyle’s Academy side past plucky Mangotsfield United and into the second round of the FA Youth Cup.

Having already seen one spot-kick come back off the woodwork, the Greens took the lead through Angel Waruih’s penalty on 18 minutes, and looked good value to extend their advantage further as the half wore on.

Against the run of play, the visitors drew level through Jadyn Crosbie’s smart finish on 40 minutes, before Jamal Salawu took advantage of sloppy play at the back to win the tie just after the hour.

Off the back of three straight wins, the Academy entered the fixture with confidence, but manager Darren Way emphasised pre-match that his team would need to respect their non-league opponents, who had already notched four wins en route to the first round proper.

Argyle began the game with the intensity their coach demanded, and nearly forced an opening after four minutes.

Will Jenkins-Davies, evidencing the qualities that earned him a professional deal on his 17th birthday last week, showed shades of Danny Mayor as he skipped past his marker down the left before pulling the ball back for fellow Wales youth international, Freddie Issaka, on the edge of the box.

The young striker fired at goal, but his effort was deflected away to safety, despite Jenkins-Davies’ best attempts to keep the ball alive on the rebound.

Having kept the visitors penned back in their own half, Argyle were awarded their first of two first-half penalties when Issaka, Argyle’s youngest ever player to make a senior appearance, was tripped after getting the wrong side of his marker inside the box. Captain Carlo Garside stepped up to take the penalty, only to smash it hard against the crossbar.

No matter, as a few moments later Argyle’s dominance took its toll. Cutting in from the left, Waruih showed speed of both thought and movement to squeeze between two markers before being scythed down by Jason Nderemani. Waruih dusted himself down to fire the spot-kick confidently inside visiting goalkeeper Ben Creighton’s right-hand post.

The Greens continued to enjoy the vast majority of possession, probing side to side against a dogged and determined Mangotsfield side content to sit deep. The lion’s share of the Argyle attacking play in the opening half came from the left, and great link-up play between Jenkins-Davies and Waruih saw the latter step inside and curl wide from the edge of the area.

Though Argyle looked by some distance most likely to score next, Mangotsfield drew level with their first attempt on goal. On a rare foray into Argyle territory, a low delivery found striker Jadyn Crosbie on the edge of the box, and he fired a smart first-time effort back across Zak Baker’s goal and into the far corner.

The visitors had done very well to return to the dressing rooms level, and their discipline and dedication looked to be a real problem for Argyle as the match passed the hour mark with opportunities drying up.

In the end, it was a defensive error that settled matters, Salawu applying pressure before gratefully pouncing on a loose touch from Creighton at the back to bundle it home.

Buoyed by regaining the lead, Argyle searched for a third. A vicious Jenkins-Davies in-swinging corner fizzed past the goalkeeper and nearly went in, only to be headed off the line, before Oscar Rutherford cut in from the right flank, showed a wicked turn of pace and drilled a low effort narrowly wide of the far post.

With a little over 10 minutes left to play, midfielder Caleb Roberts, who had enjoyed an excellent second half, latched onto a clipped ball forward before navigating expertly through traffic. Leaving several defenders trailing in his wake, the 16-year-old curled narrowly over the crossbar with his left foot.

It proved to be academic, but not before the visitors gave everyone inside Home Park a real fright, with Charlie McCrae wriggling free in the box to crash an effort off the crossbar.