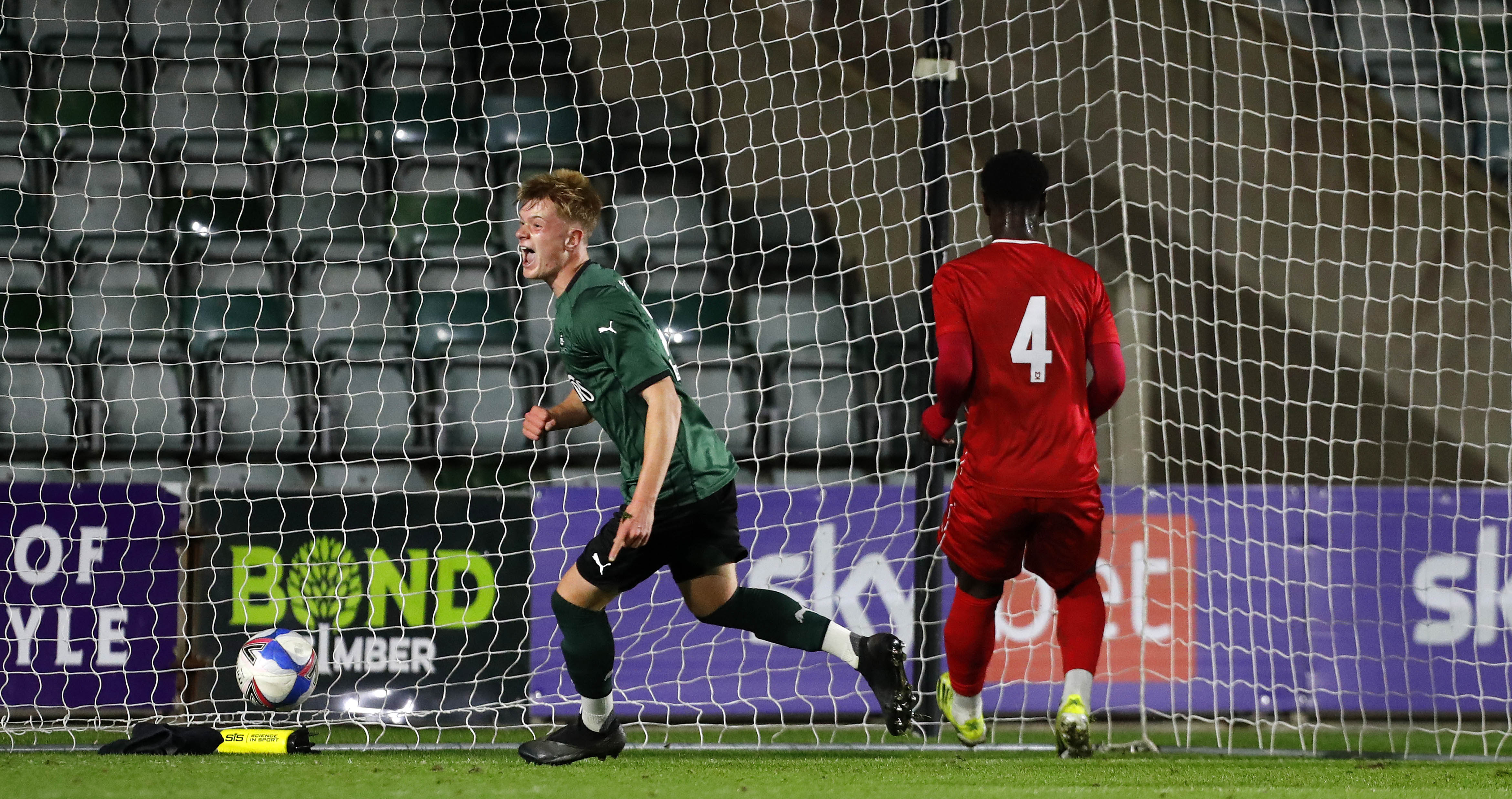 Will Jenkins-Davies’ early strike, followed by a brace for Jamal Salawu, saw a dominant Argyle Academy side past Milton Keynes Dons and into the third round of the FA Youth Cup.

In truth, the Pilgrims were value for far more goals than the three they converted, but a combination of profligate finishing and a man of the match performance from Dons stopper Ronnie Sandford kept things interesting.

Academy coach Darren Way had named a strong side with three professionals in the starting line-up, with Oscar Halls, Brandon Pursall and Jenkins-Davies all involved, and Angel Waruih captaining the side in the absence of the injured Carlo Garside.

Argyle dominated from the off, and the Greens’ first clear-cut opportunity fell to Oscar Massey, after Salawu threaded a perfect through ball for his strike partner to chase. Bearing down on goal, Massey was denied by goalkeeper Sandford, who got down low to his right to make a smart stop one-on-one. It would be the first of many such interventions.

Argyle’s dominance in possession continued as the first half wore on, and midfielder Caleb Roberts was next to try his luck from range, with a low strike forcing a good save from Sandford, who also reacted well to deny Massey’s follow-up from a tight angle.

The Greens’ forward pressure eventually told, with Argyle’s hassling causing a turnover in the Dons’ area after a failed attempt to play out from a goal-kick. Salawu gratefully pounced on the loose ball inside the box to square across goal, where Jenkins-Davies was waiting to smash into an open net from six yards.

Just three minutes later, another loose ball presented Argyle with their second. Having set up Jenkins-Davies for the opener, Salawu latched onto a ball into the box and measured a beautiful finish into the far corner.

With the game still not half an hour old, Roberts presented Salawu with an excellent opportunity to add to his tally, but Sandford made a strong stop to repel a fierce effort at the near post.

In truth, Argyle could’ve been out of sight by the interval, and Salawu’s pace and direct play was causing all sorts of problems. Reacting quickest after Jenkins-Davies’ free-kick was deflected, the striker smashed an effort at goal from the penalty spot, but was denied by another smart Sandford stop.

If the Dons’ goalkeeper was at all culpable for Argyle’s opener, he had more than made up for it by half-time, as he saved another Massey effort in first-half stoppage time.

For all their dominance, Argyle’s lead was halved early in the second-half.  Just moments after Roberts’ sublime skill and strike ricocheted over the crossbar off Massey, the visitors broke at pace, and a left-wing cross was hooked beyond goalkeeper Lewis Moyle by Milton Keynes striker James Meadows.

The goal didn’t do much to change the match pattern. Shortly after the Dons’ goal, Massey saw yet another goal-bound effort turned to safety by Sandford, before Jack Endacott’s superb left-wing cross was headed over the bar by an unmarked Salawu.

Substitute Freddie Issaka, on for Massey, was next to see an opportunity go begging, collecting Salawu’s pass unmarked on the penalty spot, before scuffing his half-volley wide of the post.

Salawu, and Endacott both followed up with efforts from outside of the box, before Jenkins-Davies fed Issaka on the breakaway, only for Sandford to pull off another outstanding save. From the resultant corner, Halls headed agonisingly wide.

As chance after chance came and went, it seemed written in the stars that another goal would not come. With the game entering its final stages, Salawu collected possession on the edge of the area and swept beyond Sandford for his second of the game. It was no more than he and the team deserved.

Next up for the young Pilgrims is the test of category one Academy Brighton and Hove Albion at Home Park.