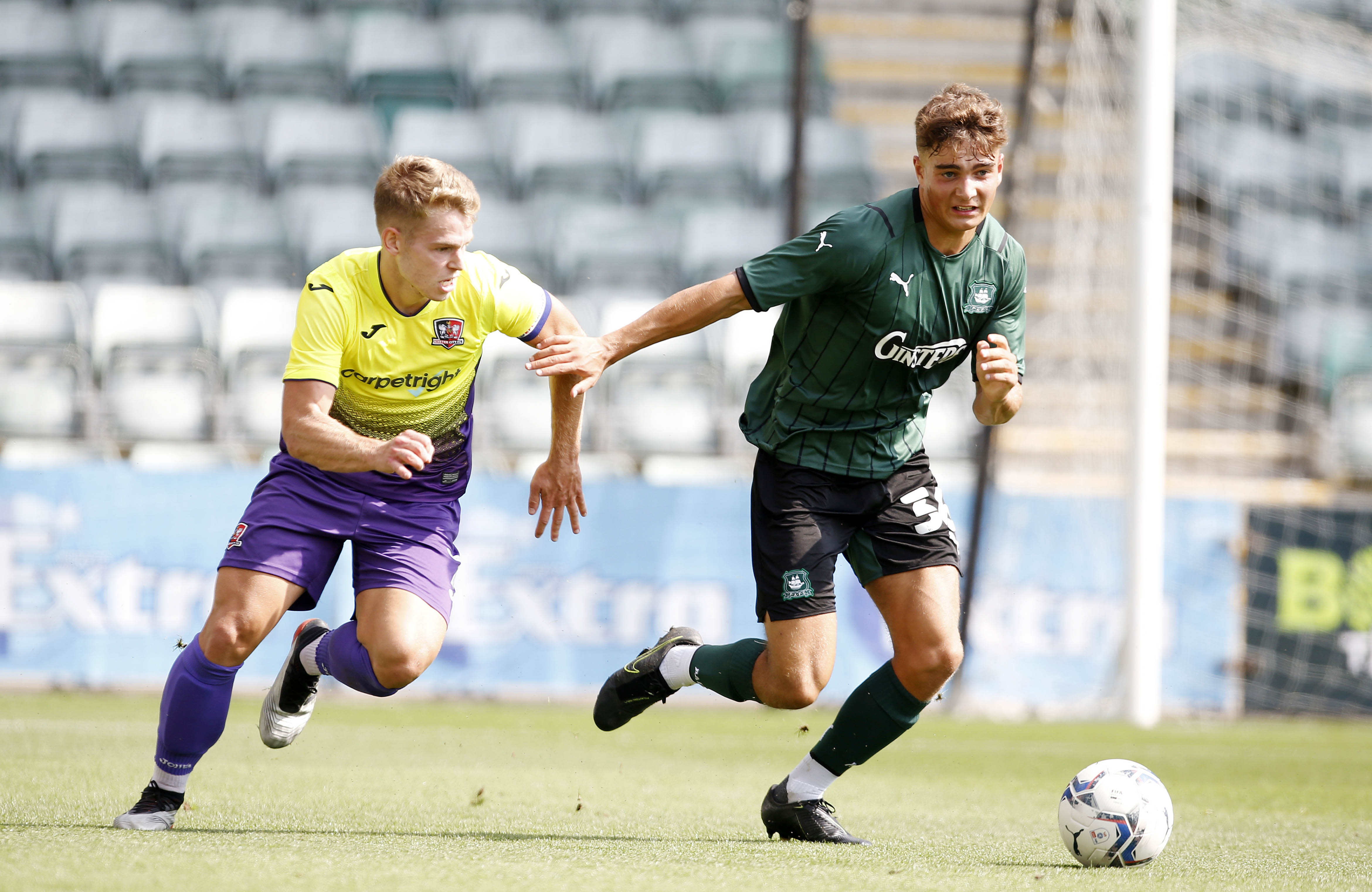 A late Argyle fightback was not enough see them through to the Premier League Cup group stages, as Ben Seymour’s double sent the Grecians through.

The Pilgrims fought valiantly against a City side blessed with more first-team experience, and Ryan Law’s strike set up a climactic final period which also saw an equaliser disallowed.

Managing the side on Friday afternoon, under-23 technical lead and first-team coach Kevin Nancekivell named the bones of the same side that travelled to Rodney Parade for Papa John’s Trophy duty in midweek.

Senior figures James Wilson, Jordon Garrick and Callum Burton dropped out of that side, to be replaced by Ethan Mitchell, Oscar Rutherford and goalkeeper Lewis Moyle. Record-breaking Pilgrim Freddie Issaka, who became the club’s youngest ever competitive appearance maker on Tuesday, was named among the substitutes’ bench.

With a spot in the Premier League Cup group stage at stake, the Grecians named a squad of greater maturity and first-team experience than the Greens, including captain Harry Kite, who netted in the 4-1 Sky Bet League Two victory over Bristol Rovers in August, and 33-year-old Colin Daniel – who has amassed nearly 500 senior appearances over the course of his career.

A challenging afternoon was made even tougher just three minutes in the game, when City’s no.9 Seymour opened the scoring. The striker, who has 67 first team appearances to his name for the Grecians, evidenced his experience to latch onto a loose header in the Greens’ box, before turning smartly and firing emphatically into the top corner of Moyle’s goal.

Unperturbed by the poor start, the Greens looked to level immediately, with Brandon Pursall threading a lovely ball in behind from deep for Rhys Shirley to chase. Having beaten the back-line for pace, the striker was unable to extend his left leg far enough to control the ball with only the ‘keeper to beat.

Moments later, Argyle threatened again down the left, with one of the more senior members of the team, wing-back Ryan Law, dancing through a gauntlet of City legs before pulling the ball back across the face of goal with Oscar Massey unable to connect.

Having been unable to connect moments earlier, Massey turned provider on 13 minutes, leaving his marker on the turf with a quick shift of feet before dragging a cross to the far post. Rutherford arrived, with shades of Joe Edwards from right wing-back, but fired wide from close range – although the offside flag was raised anyway.

At the other end, Seymour proved a constant threat as Argyle’s possession-based game began to pull them back into the game, with the striker’s direct run down the right culminating in a fierce strike over the bar from an acute angle.

For Argyle, the trickery and pace of Law seemed to be the most likely route to parity. Having seen numerous deliveries going unconverted in the opening 45, the wing-back took matters into his own hands on the stroke of half-time, drifting infield before curling a 25-yard effort narrowly wide of Harry Lee’s far post.

Early in the second half, Issaka replaced Massey as the Greens continued to probe for an opening, but the game looked to be out of reach when City broke just after the hour.

Having snatched possession with Green bodies committed to the attack, Kite sent a measured through ball into the box for Seymour to chase and slot beyond Moyle for City’s second.

Keen to make their mark on the contest, with Nancekivell barking words of encouragement on the touchline, Argyle did not let their heads drop. And just four minutes after City’s second, the deficit was halved.

Having seen Ethan Mitchell’s far post header cannon back off the far post, Argyle pulled one back through Law, who reacted quickest to slam the rebound home via a defensive deflection.

The goal sparked a change in approach for the visitors, who retreated deep to protect their lead, while a bombardment of set plays, delivered most capably by central defender Brandon Pursall, threatened to haul Argyle level.

With the clock approaching 90 minutes, Law thought he had a dramatic second, heading home Rutherford’s hanging cross at the back post, but referee Rowan Clarke awarded a free-kick for an infringement on the goalkeeper.