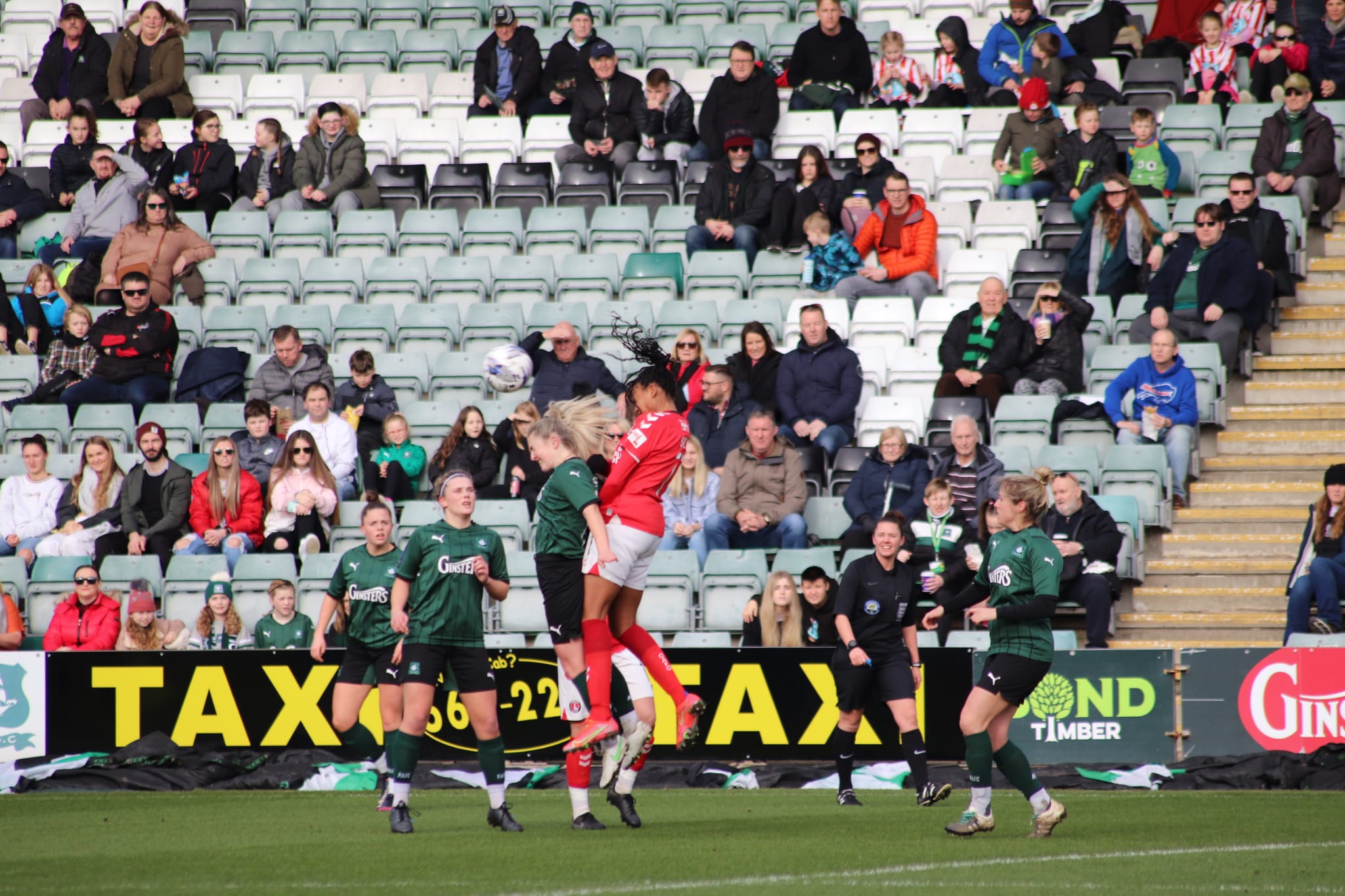 Plymouth Argyle Women exited the Vitality Women's FA Cup in the 4th round after a 6-0 defeat against Championship side Charlton Athletic.

It was always going to be a difficult task for Argyle up against a fully professional side sat in 3rd place in the league above them, but Argyle started well against Charlton, with Amber Pollock drawing the first save of the game after just three minutes.

Pollock was played in behind Charlton's right-hand side and shot low at the near post, but debutant Negri got down well to palm away the shot.

The game played out as one might expect, with Charlton seeing most of the possession while Argyle stayed compact and looked to hit Charlton on the counter and utilize the pace of Pollock and Alphous on the wings.

It nearly worked as in the 7th minute as Gabi Alphous was played in down Charlton's left-hand side, but her left-footed snapshot drifted wide of Negri's far post and out for a goal kick.

As the first half progressed, Argyle continued to frustrate Charlton and limited them to few chances until the 20th minute. Rutherford found space on the right-hand side and picked out Heuchan at the far post, but she couldn't get her shot on target as the ball flew wide of Poppy Soper's far post.

Then in the 29th minute, Charlton nearly had the breakthrough. Olding was played through one on one against Soper, but the Welsh international did brilliantly to make herself big and save her shot with her legs to keep the scores level.

As the half-time whistle blew, Argyle would be pleased to have kept the game at 0-0 against their Championship opposition. They had worked hard off the ball and limited Charlton to few opportunities, but unfortunately for Argyle, Charlton went up a gear in the 2nd half.

In the 50th minute debutant, Robinson drew an excellent save from Soper, who somehow blocked her goal-bound header from 3 yards out before palming away a Rutherford shot from distance in the 57th minute.

But then, only a minute later, Beth Rowe would break the deadlock. Rowe found space at the edge of the argyle box, cut inside her marker and found the bottom left corner to give Charlton the lead.

Having worked so hard to contain Charlton for 60 minutes, it was clear that the fitness levels of Charlton's professional players were beginning to have a greater impact when only 5 minutes later, they doubled their lead.

Charlton played the ball into the Argyle box, and the initial shot was saved by Soper; the second shot was blocked by Giota on the line before the ball rebounded to Jorja Fox, who finally found the back of the net to double Charlton's lead.

Just three minutes later, Charlton had a third. The loose ball fell to Lois Roche in the centre of the penalty area, and she smashed the ball into the roof of the net for Charlton's third goal.

Argyle made a triple substitution and reverted to three at the back to try and find a way back into the game; but in the 78th minute, Charlton had a 4th goal.

Katie Robinson, on her debut, got the goal after she was played through on goal by Hughes and finished well beyond Soper in the Argyle goal.

In the 83rd minute, Sampson added more gloss to the scoreline after a deflected clearance fell to her in the box, and she smashed the ball into the bottom corner.

Then in the final minute of the game, Charlton played a corner into the Argyle box, and Mia Ross rose highest to head in Charlton's sixth goal, sealing progress for the Addicks into the 5th round of the Vitality Women's FA Cup.

While Argyle's wait to reach the 5th round of the FA Cup for the first time will continue for at least another season. The Pilgrims should take plenty of positives from their cup run and will now refocus onto the league with a big game away to Chichester awaiting them next weekend.