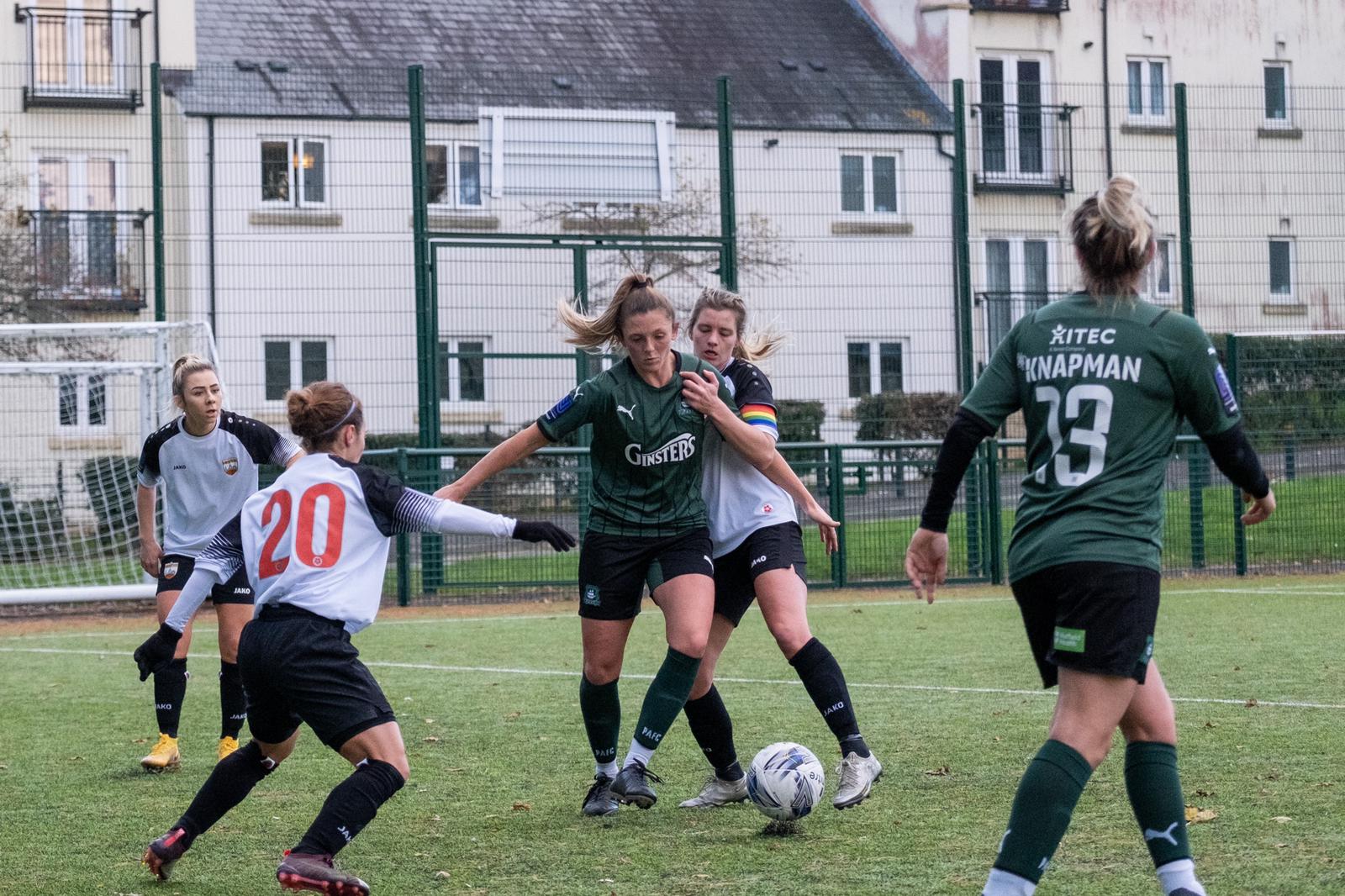 Plymouth Argyle Women will be wondering how they lost 3-0 after dominating the game against London Bees. After a recent run of good performances, Argyle hoped to turn their performances into points against midtable London Bees. Argyle reverted to their now familiar 3-5-2 with Tracey Cross again deputising at centre back and Rosie Train and Sophie Perrin continuing their good form as Argyle’s wing-backs.

It was a fast, aggressive start from Argyle, who moved the ball quickly across the ground to try and unpick the London Bees defence. Argyle saw most of the ball in the opening 10 minutes and won a succession of corners after Perrin continuously found space in behind the Bees’ defence, and her crossing expertise forced them to clear the ball behind for corner after corner. Despite, their pressure Argyle couldn’t work a clear opportunity until the 15th minute.

A loose ball fell to Zoe Cunningham 25 yards from goal, but her brilliant volley just didn’t dip enough and could only rattle the Bees’ crossbar before bouncing behind for a goal kick. Argyle continued to press for the opener, and Crawford, Rose and Lane all tested Hazelton in the Bees’ goal, but she was equal to their strikes from the edge of the box.

Then in the 33rd minute, Argyle created the best chance of the first half. The Bees cleared an Argyle free-kick, but the Pilgrims recycled the ball and worked it out to Knapman, who picked out strike partner Gabi Alphous in the 6-yard box, but her shot was straight at Hazelton, who palmed her strike away.

After having so much of the ball and creating so many chances, there was always the fear that Argyle would be punished for not taking their opportunities, and they were punished in the 35th minute as London Bees took the lead against the run of play. A long hopeful ball was played in behind the Argyle defence, and a miscommunication between defence and goalkeeper allowed Bell to nip in behind beyond Soper and roll the ball into an empty net.

Argyle showed great character to almost instantly respond, as only two minutes later, Knapman drew another great save from Hazelton. Knapman won a header from a corner at the far post, but Hazelton was able to palm the ball away from the top corner when it looked destined to hit the back of the net.

Argyle continued to press for the equaliser but went into half-time a goal down despite arguably their best performance of the season.

The 2nd half continued like much of the first half, with Argyle seeing most of the ball and playing on the front foot to try and break down a stubborn London Bees defence. They nearly equalised in the 55th minute when Knapman won another header from a Train cross, but she could only direct it straight at Hazelton, who claimed and held the header. Then only two minutes later, Argyle conceded again against the run of play. Argyle played the ball out from the back, but a loose pass gave possession to London Bees, who played Wilson in behind who finished well past Soper in the Argyle net.

Despite being two goals down, Argyle continued to push forward in search of a way back into the game and nearly found it in the 64th minute. Cunningham played Knapman in behind the Bees’ defence, but Hazelton made herself big to deflect Knapman’s goalbound strike away to safety. Then only moments later, Perrin’s cross found Train at the far post, but her shot went only inches wide of the Bees' post. And once again, Argyle worked the ball well to find Knapman one on one, but again Hazelton was quick off her line to close the angle and make the save to push Knapman’s shot wide.

Despite seeing so many chances go amiss, Argyle continued to play positively and move the ball well, and they won a corner in the 77th minute. Perrin whipped a ball in towards Knapman, who was having her shirt pulled and was hauled to the ground by a Bees defender. Despite plenty of cries for a penalty from the Argyle players, the referee waved play on, and the Bees cleared the ball to safety.

Then only a minute later, the Bees added a third goal, again from an Argyle mistake. A miss-hit pass at the back gave the ball away to Heira, who played Wilson in through on goal, and she finished into the bottom corner to extend the Bees’ lead.

Argyle continued to press for a way back into the game, but the Bees nearly added an unlikely 4th goal. A loose ball fell to Gamby in the Argyle box, but Soper did superbly to palm her strike over the bar.

Despite more Argyle pressure, the game finished 3-0 to London Bees. It was a tough result to take for Argyle, who, despite putting in arguably their best performance of the season, somehow found themselves on the wrong end of a 3-0 defeat.