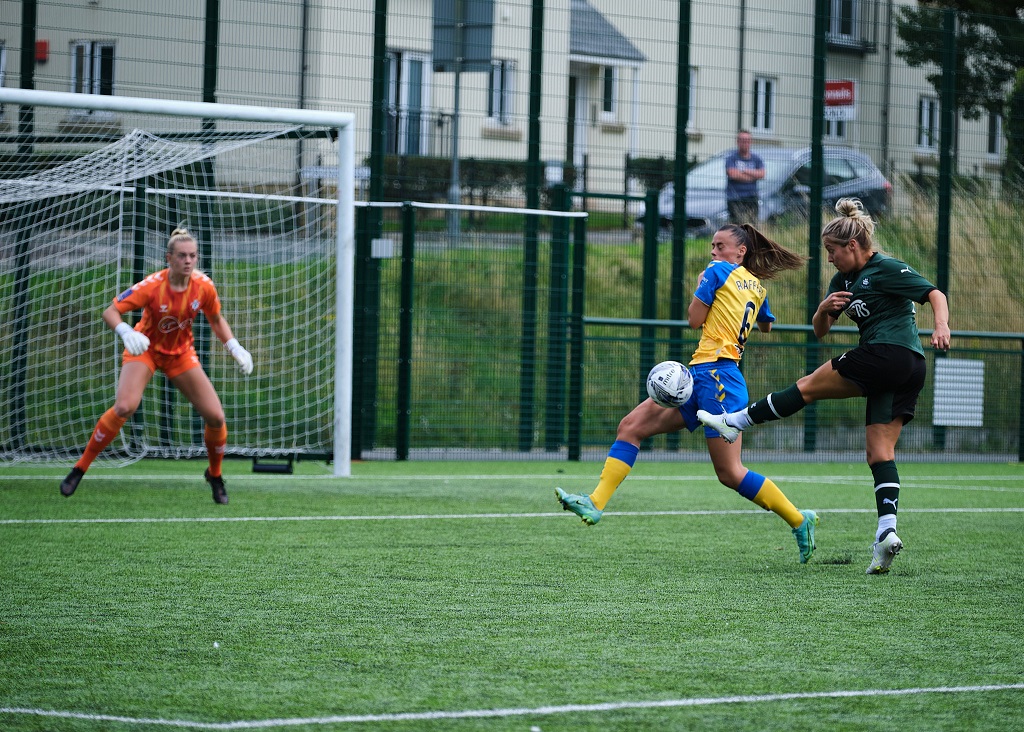 An opening two games against joint league favourites Portsmouth & Southampton were always going to be difficult for this new look Argyle side. But despite another defeat, there was plenty of positives to take from Argyle’s first home game of the season.

Before the game, Argyle were forced into some defensive changes, with first-choice central defenders Olivia Ramsey and Lydia Huntley both unavailable. In their place came RB Sophie Perrin and the surprise inclusion of versatile attacker Tracey Cross as the makeshift defensive partnership. However, you wouldn’t have known it from watching, as Argyle started the brighter of the two teams, with Perrin and Cross comfortably dealing with the Southampton attacks, allowing Argyle to build some early pressure.

Indeed, it was as early as the 2nd minute when Argyle could and possibly should have taken the lead. A long ball was played in behind the Southampton defence. Instead of clearing the ball, goalkeeper Rendell attempted to juggle the ball and was quickly pressed by the tenacious Knapman, who intercepted the ball with her head. Unfortunately for Argyle, Knapman’s header didn’t have enough power and was cleared by the covering defender.

As Argyle continued their early pressing, Knapman again got in behind the Saints defence, but her left-footed drive was well blocked this time. Knapman then turned provider as she dribbled through a couple of defenders, but her pass to Alphous was just too heavy to create a scoring chance.

After the early chances for Argyle, the game began to settle down as Southampton grew into the match. Despite a period of few opportunities for either side, it was Southampton who took the lead. After a well-worked short corner, Rutherford rose highest to head home the opener for the Saints in the 31st minute. Southampton then added to their lead through yet another set-piece with Rutherford again getting on the end of a corner to head in her and Southampton’s, second goal of the afternoon in the 38th minute.

Then in added time, it was Argyle’s turn to create a chance from a corner, as Cunningham’s well-taken corner flew past everyone to find Knapman at the far post, who was inches away from connecting and giving Argyle a way back into the match just before half-time.

In the second half, Argyle started brightly, with Ireland’s breaks in behind causing problems for the Saints defence, who were grateful for the goalkeeping of Rendell to claim a succession of crosses. It was then in the 53rd minute when Argyle came closest to a goal – again from a corner – as Crawford seized on a loose ball at the edge of the box, but her low drive slammed against the foot of the post as Southampton cleared.

Like the first half, Southampton began to take hold of the game as Argyle started to tire. The Saints nearly had a third in the 59th minute, again from a corner, but on this occasion, the referee blew for a foul on Soper as the Saints bundled the ball into the goal. However, Southampton would add to their lead in the 75th minute as Freeland burst in behind to tee up Watling to tap home for the third goal of the afternoon.

Then despite a late flurry of chances for Argyle with Knapman, Alphous and Ireland all going close to goals, it was Southampton who would hold onto the clean sheet and the three points. With Argyle having no points but plenty of positives to take from the first home game of the season.

Download a copy of the match day programme here.