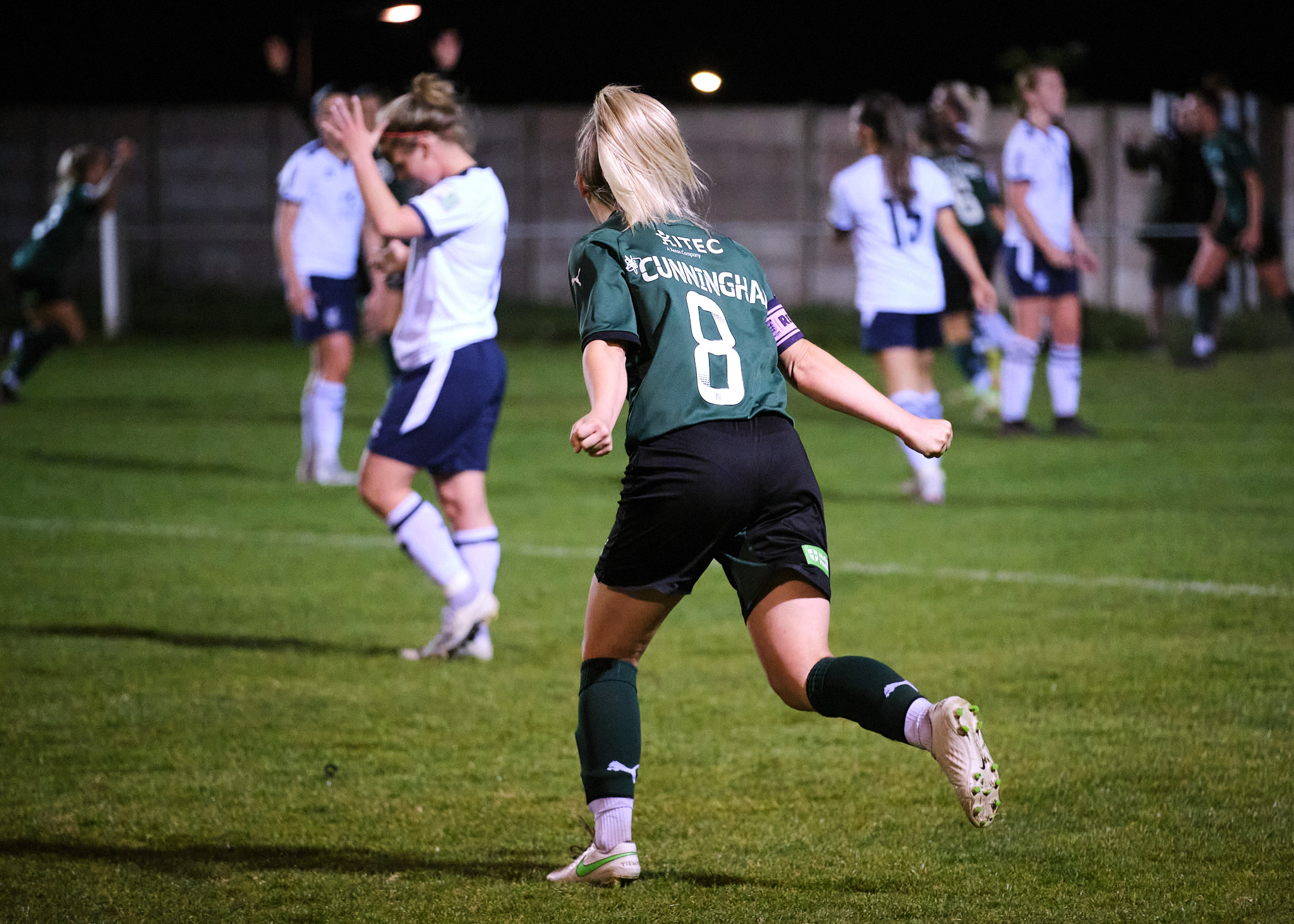 Plymouth Argyle Women sealed their place in next season's FA Women's National League Southern Premier Division after their first draw of the season moved them four points clear of the relegation zone with only one game left to play.

Following Sunday's 5-0 win over Hounslow, The Pilgrims knew that one point from their last two games would seal survival, and they did it at the first attempt.

The tension was palpable at Kimberley Stadium as The Pilgrims set about trying to unpick a very well organised Bridgwater United, but Argyle started well and exploited the space in behind United, with Knapman and Whitmore looking particularly dangerous.

The first chance fell to left-back Rosie Train after she found space on the left-hand side and whipped an excellent ball into the Bridgwater box. Neither Knapman nor Whitmore could reach it, but Howard in the Bridgwater goal would have been relieved to see Train's cross curl narrowly wide of the post after it looked like it might have sneaked in.

Following the early scare, Bridgwater began to carve out some chances of their own. First Markham did well to seize on a loose ball in the Argyle defence, but a brilliant tackle from Giota did enough to nip the ball away from her, with the rebound being fired wide of Jasmine Read's far post.

Only four minutes later, Read was called into action after a ball into the box found Ackerman, and it took a superb save from Read to palm her strike wide of the post.

After a fast start, the game began to become quite cagey, with neither side managing to break the other down while set pieces and counterattacks began to look like the most likely source of goals for both sides.

It was a rapid Argyle counterattack from a Bridgwater corner that created the next chance. Argyle moved the ball well through Lane and Cunningham before finding Whitmore, who slid the ball into Knapman. The Argyle striker looked to find an opening to shoot, but some great covering defending forced her wide before she returned the ball to Cunningham, who saw her powerful shot blocked by the imposing Goddard at the heart of the United defence.

Argyle continued to press for the opener, and Cunningham and Knapman combined again. Cunningham put an excellent deep cross into Knapman, who did superbly to peel away from her marker and head towards goal, but unfortunately for Argyle's top goal scorer, this time, the ball went narrowly wide of Howard's far post.

Argyle were clearly growing in confidence and crafted another chance through Perrin. Argyle's right back put an excellent free-kick in towards Lane in the six-yard box, who was unable to get a solid contact on the ball with a Bridgwater defender pulling on her shirt. Argyle wanted a penalty, but the officials waved play on.

After the series of Argyle chances in quick succession, the game began to settle down, and the next best chance didn't come until the 41st minute. Rosie Train did brilliantly to win the ball off the Bridgwater defence before advancing towards the edge of the box and firing towards goal, but her left-footed strike was well held by Howard in the Bridgwater net.

It was enough to put the sides into half time level, but that was short-lived as only two minutes into the second half Bridgwater took the lead.

A cross from the right-hand side caught the Argyle defence out and fell to Nicky Potts, who was able to tap into the empty net to give United the early lead.

Despite the setback Argyle continued to press for an equaliser, with Cunningham, Whitmore and Knapman all getting into good areas but finding the stubborn Bridgwater defence hard to break down. When they did get past the defenders, Howard in the Bridgwater goal was in excellent form to come and claim the Argyle crosses into the box as The Pilgrims looked for a way back into the match.

Argyle would eventually find their deserved equaliser in the 77th minute. Captain Zoe Cunningham whipped a brilliant ball into the Bridgwater box, which fell to substitute Amber Pollock, whose goal-bound shot was deflected to midfielder Kayley Lane who fired home from close range to level the scores.

It was the least Argyle deserved, and Lane nearly added a second goal in the 81st minute after her audacious 30-yard strike looked to be heading for the top corner before Howard did well to read the flight of the shot and pluck the ball away from the goal.

With only 10 minutes left to play and with so much on the line, the tension was building as Argyle looked to see out the remainder of the game, and that tension was taken up a notch as we entered the final five minutes as Zoe Cunningham was shown a second yellow card and sent off following a coming together between her and a Bridgwater defender.

Despite the late setback, the Argyle players showed brilliant character to rally together and put their bodies on the line to see out the final few minutes of Bridgwater pressure and earn an invaluable point to secure their survival.

It was a fantastic result for Argyle that showed not only why they deserve to stay in the division but that they can compete with the teams higher in the league and have every reason to be optimistic of an improved finish next season.

With one last game away to London Bees on Sunday, it should give The Pilgrims the chance to sign off on a high, having secured safety with a game to spare.