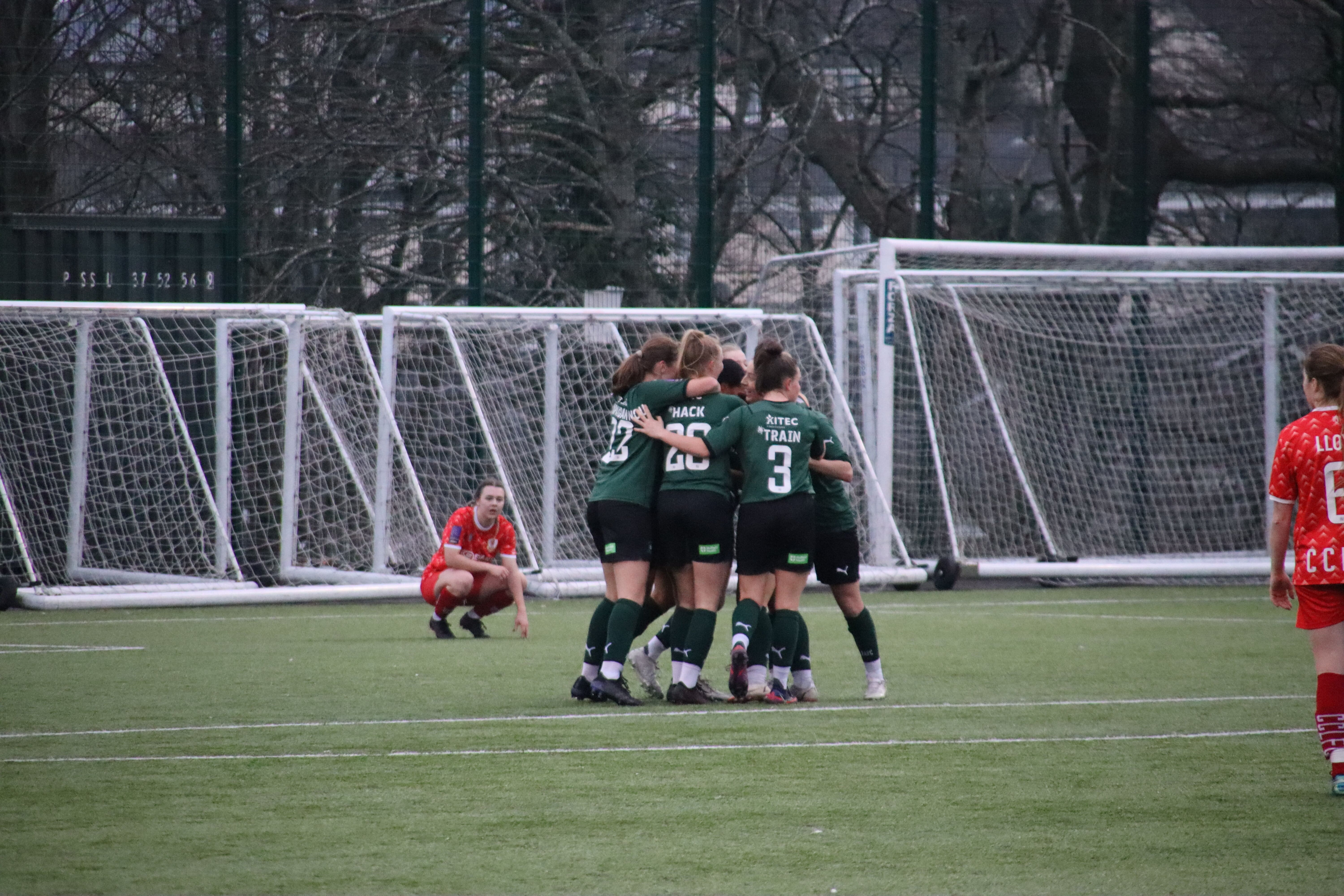 Plymouth Argyle Women made it three wins in a row after Mari Ward’s last-second goal gave them the win against relegation rivals Cardiff.

Having beaten their Welsh opposition 5-1 only two weeks ago, Argyle came into the game as favourites, and the tactical change from Cardiff was apparent to see. After an open game in the reverse fixture, Cardiff set up very defensively this time and sat deep looking to frustrate Argyle and prevent the pace of Alphous, Pollock and Ward from hurting them in behind.

Argyle saw plenty of the ball in the opening stages playing the ball from back to front, and when they did look for the ball in behind, Welsh international goalkeeper O’Sullivan was quick off her line to smother the loose balls.

Argyle still threatened and nearly opened the scoring in the 11th minute. Gabi Alphous was played in wide by Kayley Lane, and her cross was mere inches away from finding Mari Ward, who would have had a tap in if she could have connected with the ball.

With Argyle seeing nearly all of the ball, it became Ward’s turn to play provider. After a brilliant spell of possession in which nearly every Argyle player touched the ball, they found Ward on the right-hand side who whipped a cross into Gabi Alphous, but on the stretch, her shot cannoned off the post and away to safety for Cardiff.

Then despite all of Argyle’s possession Cardiff nearly took the lead. A mistake at the back saw Sargent run through on goal for Cardiff, but her shot was straight as Soper, who comfortably held the strike.

In the 30th minute, Amber Pollock was played in behind Cardiff, but her snapshot drifted wide of O’Sullivan’s far post.

Argyle continued to press for the opener in the first half, and they nearly had it on the stroke of half-time. A corner was played into the far post, Rose, Giota and Lane all threw themselves at the ball, but after a scramble, Cardiff managed to get the ball away and go into half-time level.

Argyle started the 2nd half like they did the first, and in the 46th minute, Lane tested O’Sullivan with a low drive to the far corner. But O’Sullivan did well to make the save.

Argyle then had a succession of chances with Pollock twice drawing saves from O’Sullivan before Knapman replaced her as a substitute and herself drew another save from O’Sullivan.

Then in the 67th minute, Argyle went closest to opening the scoring. O’Sullivan came out to claim an Argyle corner but spilt the ball to Mari Ward, whose shot was cleared off the line by Jones in the Cardiff defence.

Only a minute later, a brilliant ball by Ward found Alphous, whose close-range strike flew narrowly over O’Sullivan’s bar.

Then Cardiff hit back. In the 72nd minute, a long free-kick was played into the box, and after a coming together between Giota and a Cardiff attacker, the referee awarded a penalty to Cardiff. Up stepped Lloyd, who smashed the ball beyond Soper in the Argyle goal.

It was a sucker punch for Argyle, who, after dominating the game for large spells, somehow found themselves trailing by a goal. But the Argyle players picked themselves up and looked to immediately find a way back into the game.

Only five minutes later, Mari Ward found space on the right-hand side, but her curling effort drifted narrowly wide of O’Sullivan’s far post. Then in the 81st minute, Jemma Rose found Knapman on the edge of the box, but again O’Sullivan did well to palm away her strike.

In the 82nd minute, came what would turn out to be the decisive moment of the game. With Argyle committing players forward, Cardiff hit them on the counter-attack. Nolan found Sargent one on one against Soper, but the Argyle keeper made a superb save to palm away Sargent’s shot when it looked destined to find the top corner.

Then only minutes later, Argyle found their equaliser. Train floated in a free-kick from wide on the left and found Kayley Lane, who rose highest and placed her header into the bottom corner for her first goal since re-signing for The Pilgrims.

As the game entered added time, Argyle continued to press for a winner.

Knapman shot narrowly wide from just inside the box before Ward saw another shot saved by O’Sullivan at her near post.

As the minutes ticked away, it looked like the chance for a winner had gone. But, in the last seconds of the game, Argyle worked the ball to Tiana Campbell, whose defence-splitting pass found Knapman. Knapman spun her opponent and played Mari Ward through one on one against O’Sullivan, and the 16-year-old lashed the ball into the bottom corner with the last kick of the game for her first goal for Argyle and a well-deserved winner.

It was a vital result for Argyle that made it 3 wins in a row and moved them level on points with Cardiff, with a game in hand, meaning their destiny is well and truly in their own hands.