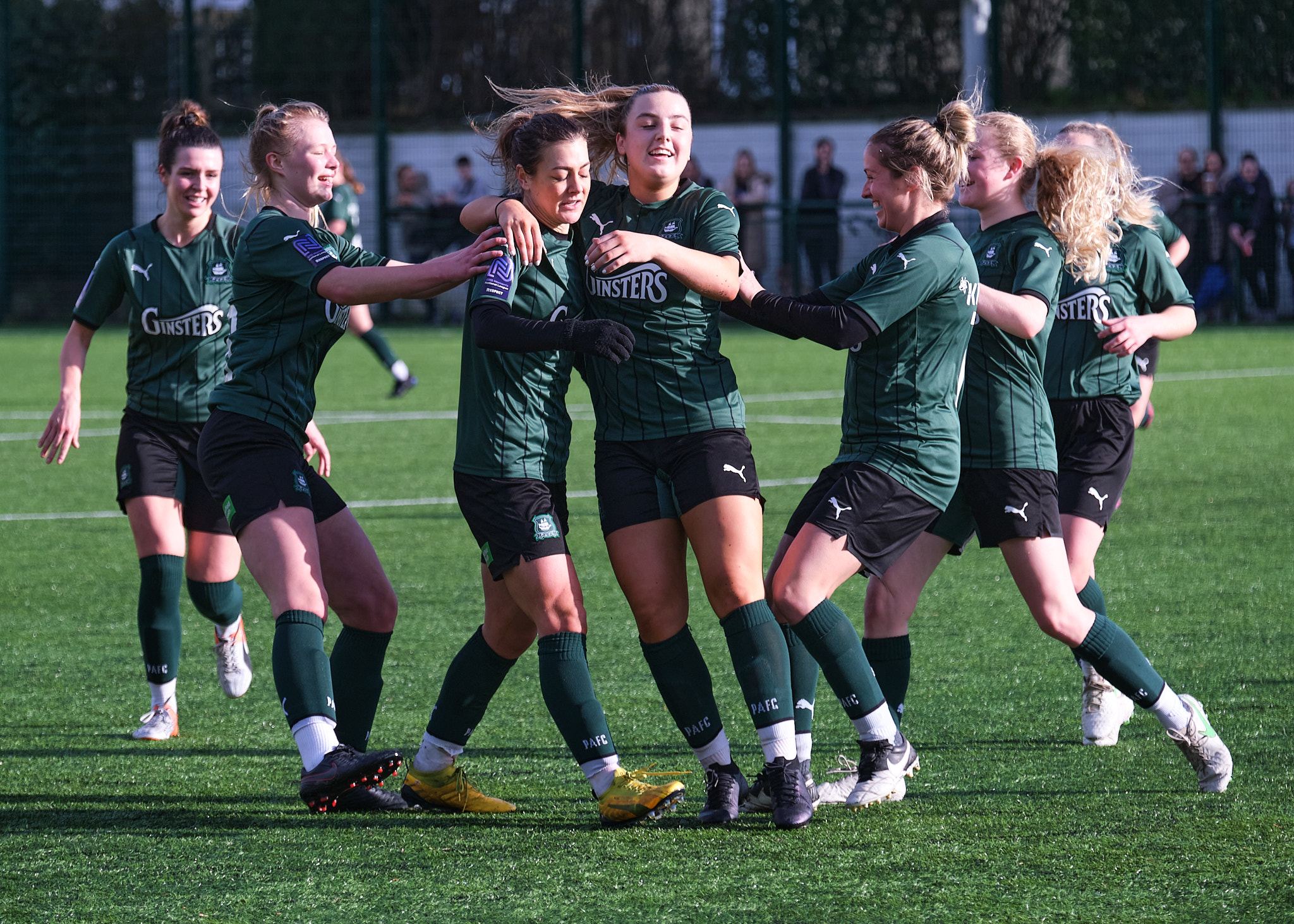 Having already lost to Chichester twice this season, Argyle knew it would be a tough game against an aggressive and hard-working Chichester side.

In their previous encounters, Chichester had shown their set-piece expertise to overcome Argyle, and after winning their first corner after just 4 minutes, Argyle could be forgiven for fearing the worst.

Unfortunately for Argyle, it was Deja-Vu as Chichester opened the scoring thanks to Phelps’ far post header from Fox’s excellent delivery.

After conceding the early goal, it was proving to be a scrappy game for both sides, with Argyle struggling to get going against their well-drilled opponents.

But as the game developed, Argyle began to grow into it, and in the 14th minute, Mari Ward’s excellent pass found Gabi Alphous in behind, but she scuffed her shot wide against the on-rushing Foster in the Chichester goal.

Three minutes later, it took an excellent save from Soper to keep the score at 1-0. Chichester found space in behind Argyle, and the shot from the edge of the box looked destined to find the top corner if not for Soper’s superb diving save to palm the ball away to safety.

Argyle began to exert more control on the game; Ward went close when she fired wide of the far post after finding space on the right-hand side in her new right wing-back role.

The Greens then crafted two chances from corners of their own. Rosie Train’s delivery was narrowly out of Rose’s reach but did find Knapman, who saw her shot deflect behind for another corner. Knapman was again on the end of this corner but, this time, mistimed her far post header, which went over the Chichester bar.

Argyle were getting closer to an equaliser and nearly had it after superb work from Gabi Alphous saw her spin her marker and drive in behind the Chichester defence and draw a superb save from Foster, who got down low at her near post to block Alphous’ shot.

Gabi Alphous then saw another shot blocked by a Chichester defender before a clash of heads between two Chichester players saw the game stopped for six minutes while they received treatment.

Argyle struggled to find their rhythm after the injury stoppage, but as the clock ticked closer to half-time, they finally found a deserved equaliser from a corner of their own.

Rosie Train’s in-swinging corner found Knapman at the far post, who this time planted her header into the back of the net and far beyond Foster for her 11th goal of the season.

It was a vital goal for The Pilgrims, who went into the second half with momentum and pushed for their second goal.

Foster had to be quick off her line to thwart efforts from Alphous and Ward as Argyle took more control of the second half, and they finally doubled their lead in the 59th minute.

Jemma Rose picked the ball up 30 yards from the Chichester goal and unleashed a screamer that arrowed into the top right-hand corner far beyond the desperate leap of Foster.

It was a goal worthy of winning any game, but with thirty minutes still to play and with their previous record against Chichester, The Pilgrims knew the game was far from over.

Then Argyle were grateful for Soper in the Argyle goal for preserving their lead. Chichester worked the ball out to Simmonds, who found space on the right-hand side and shot across the Argyle goal where Soper was at full stretch to palm her shot wide of her far post.

In the 83rd minute, Chichester won another corner. With the game on a knife-edge, the tension was palpable. But as the ball swung into the far post, Soper did superbly to rise highest and pluck the cross out of the air while under extreme pressure from the Chichester attackers.

Despite Soper’s saves, Argyle were managing the game well and should have had a third in the 88th minute. A loose ball fell to substitute Kayley Lane just inside the Chichester box, but she fired narrowly over the bar to keep Argyle’s advantage at only one goal.

With the game ticking away and time running out for Chichester, the frustration showed as Yeates was shown a yellow card for dissent. But the yellow card only seemed to frustrate Yeates more as she was then shown a straight red and charged at referee Luke McFarlane before having to be pulled away by her teammates.

Fortunately for Argyle, that was the last of the drama as they comfortably saw out the remainder of added time to preserve their place outside of the relegation zone.

Having won their last three, they go into next weekend’s home match against fellow strugglers MK Dons, full of confidence in their fight to avoid the drop.