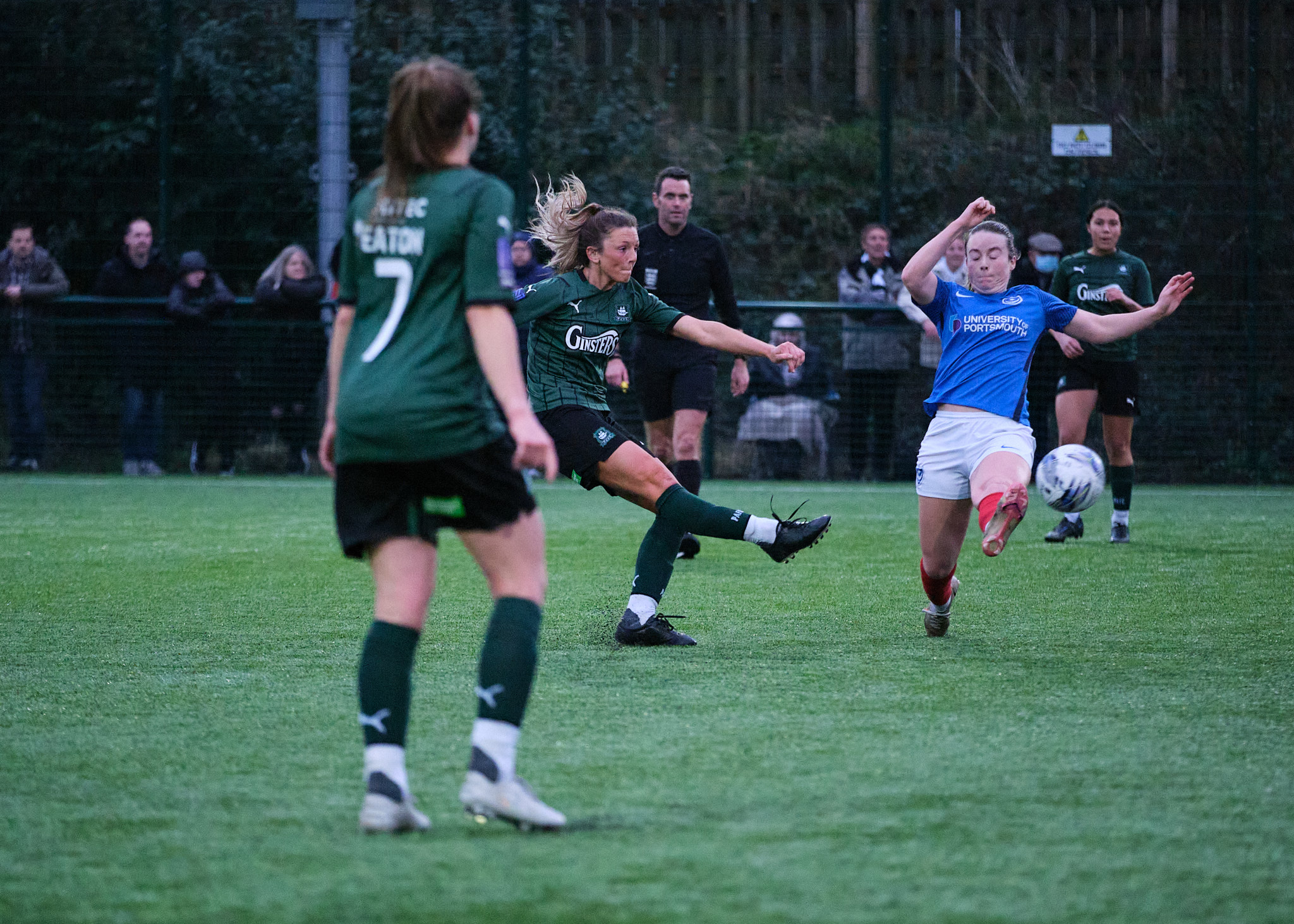 Plymouth Argyle Women made it two wins from two in 2022 after a brilliant 2-1 win against Portsmouth.

Having won 5-1 away to Cardiff in their previous fixture, Argyle had every reason to be confident but knew that they would face a buoyant Portsmouth side who had drawn 1-1 with league leaders Ipswich last weekend.

It was a fast start from the visitors who forced an early corner and after a scrambled ball into the box it took a Beth Ireland header to clear the ball off the line to keep the scores level.

After the early scare Argyle reacted well and with the pace of Amber Pollock, Gabi Alphous and Mari Ward up front they regularly threatened the Portsmouth back line and deservedly took the lead after just six minutes.

A ball from midfield played Amber Pollock in behind the Portsmouth defence, she whipped an excellent cross towards goal which Pompey keeper Haughton could only palm away. Gabi Alphous did brilliantly to win the loose ball and play it to Beth Ireland who smashed the ball into the top corner to give Argyle the early lead.

Argyle continued to threaten Portsmouth and nearly doubled their lead in the 8th minute when Mari Ward played Gabi Alphous in behind, but after good pressure from the Portsmouth defence, her final shot was saved by Haughton.

Despite seeing more of the ball than the Greens, Portsmouth struggled to work any clear-cut opportunities and were frustrated by a resilient Argyle side. That frustration showed in the 17th minute when Khassal was booked and sinbinned for dissent, after preventing Zoe Cunningham from taking a quick free kick.

Argyle were not only working hard off the ball, but when they did win the ball back, they used it well. In the 22nd minute Cunningham played Mari Ward in behind and if not for a last-ditch tackle from a Portsmouth defender, she would have surely extended Argyle’s lead.

Argyle continued to keep Portsmouth quiet from open play, with set pieces being Portsmouth’s most threatening avenue of attack. In the 25th minute Pompey fortunately struck the bar after an overhit corner clipped the woodwork before Argyle cleared it to safety.

In the 32nd minute Portsmouth did equalise. Another corner was whipped towards the Argyle goal and after a scramble the bouncing ball fell to Jazz Younger, her first shot was saved by Soper, but she could do nothing to stop the rebound and Pompey levelled the score.

Despite the setback the Argyle players showed no signs of letting it affect them as they looked to try and restore their lead and only five minutes after Portsmouth's equaliser, Argyle did just that.

Gabi Alphous dribbled past Younger in the Pompey defence and as she looked to shoot towards goal, the defender dived in for the tackle,  fouling the Argyle forward from behind. The referee had no choice but to award the penalty and show Younger the yellow card.

Up stepped captain Zoe Cunningham who smashed the ball beyond Haughton to restore Argyle’s lead for her 2nd goal in two games.

Argyle saw out the rest of the first half relatively comfortably with Portsmouth only threatening from set pieces against a determined Argyle side who went into half-time 2-1 up.

Portsmouth started quickly in the 2nd half and had their best two chances of the game early on during the second period. A mistake in the Argyle defence saw the ball fall to Hayley Bridge but she blasted over the bar from the edge of the Argyle box. Portsmouth then threatened again from a corner, but Younger’s close-range header fell narrowly wide of the far post.

Having survived those early opportunities Argyle responded with several chances of their own. In the 50th minute Mari Ward played Gabi Alphous through on goal but her left footed snapshot went wide of the near post. Then shortly after it took good reactions from Haughton to cut out a succession of Argyle crosses, from both Pollock and Ireland, as Argyle threatened Portsmouth on the counter attack.

As the 2nd half progressed Portsmouth continued to see more of the ball but failed to work many opportunities against the home side. In fact, it was Argyle who created the better chances on the counter attack. In the 60th minute Pollock nearly extended the lead but her attempted lob against Haughton was deflected away to safety by a Pompey defender.

In the 76th minute Lane played a brilliant cross towards Alphous at the far post, but she couldn’t get enough contact on the volley and the shot was well held by Haughton. Just two minutes later it was Argyle’s turn to threaten from a set piece after Perrin’s corner clipped the Pompey post and after a scramble the ball was cleared away from danger by Portsmouth.

As the game entered the final ten minutes Argyle continued to defend resolutely with good interventions from Giota and Rosie Train cutting out Portsmouth attacks before they could threaten the Argyle goal. With Argyle defending ever deeper it seemed inevitable that a final chance would fall Portsmouth’s way, but the chance never came, and Argyle saw out the final few moments relatively comfortably.

It was a massive result for Argyle who made it back-to-back wins in the league for the first time this season; and with another home game against Cardiff to come next weekend, they have every reason to be positive of continuing their excellent start to 2022.