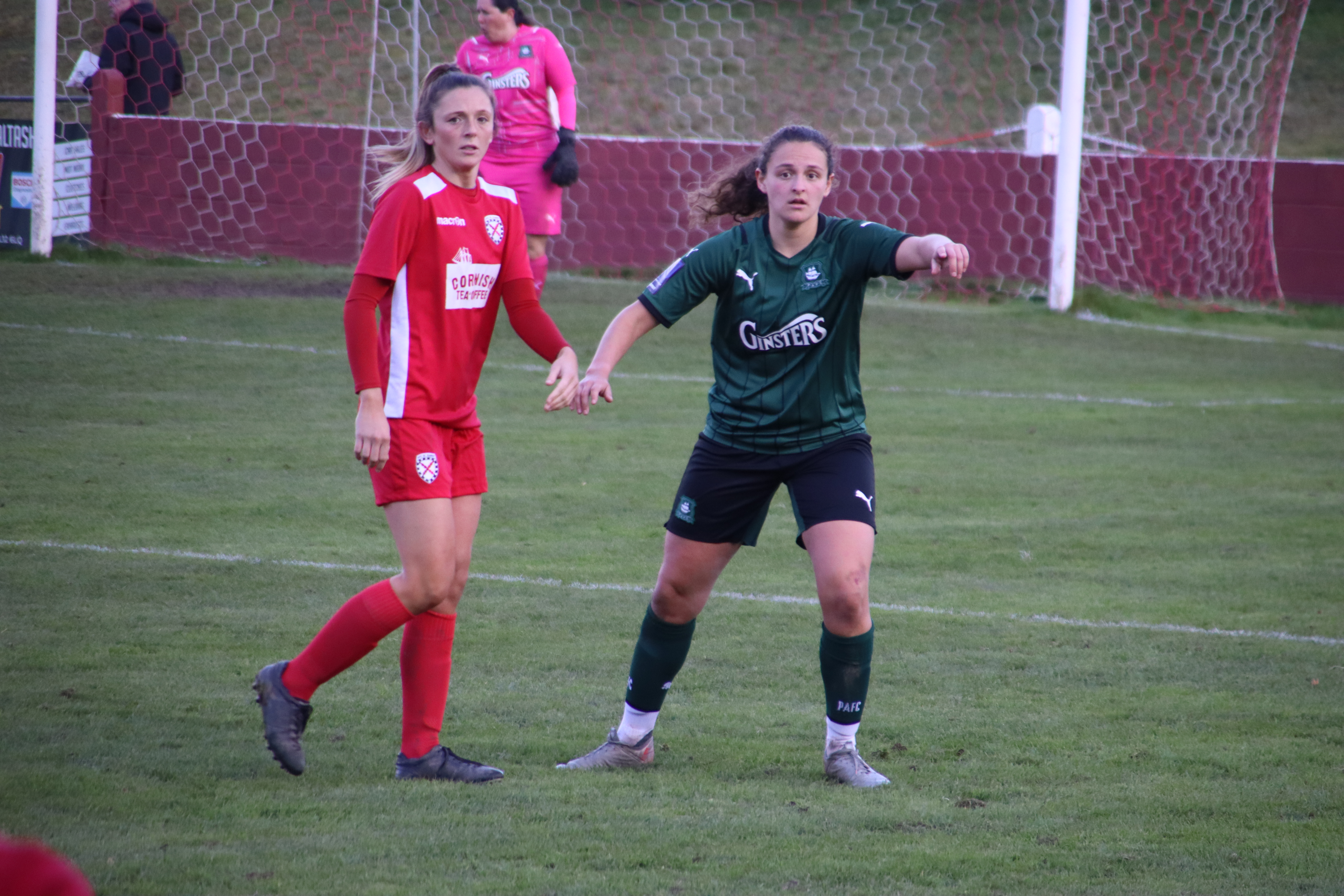 Plymouth Argyle Women are through into the 3rd round of the Vitality Women’s FA Cup after a comfortable win against St Austell Ladies. While a couple of divisions below the Pilgrims, St Austell came into the game unbeaten in the league and full of confidence after beating Torquay 2-0 in the previous round. One of the goal scorers from that game was Argyle midfielder Kayley Lane, who, due to being cup-tied, lined up against the Pilgrims for St Austell.

After having several players unavailable last weekend, Argyle were pleased to have top goal scorer Tash Knapman and Jemma Rose both return to the starting lineup. There was also a first start of the season for Katie Middleton, who deputised in goal in place of Poppy Soper, who was away on international duty with Wales.

Argyle started well and had the first chance of the game after just two minutes. Zoe Cunningham picked up the ball and played Gabi Alphous in behind the St Austell defence, but her snapshot went wide of the far post.

It was an end to end start to the game, and Middleton was quick off her line to authoritatively claim a number of St Austell balls in behind. But Argyle had the better of the attacking play with both Alphous and Knapman having chances inside the St Austell box, but unfortunately, they couldn’t find the finishing touch to give Argyle the lead. That was until the 28th minute when Cunningham seized on a loose ball and played Alphous in behind, who finished comfortably past Frickleton in the St Austell net.

Then only seconds later, Argyle doubled their lead. Cunningham again was the provider playing Ireland in behind this time, and after taking a couple of touches around the St Austell defenders, she fired the ball into the top corner.

Argyle continued to press for more goals, with Knapman again going close, but her audacious volley in the 31st minute went narrowly over the bar. Argyle did have the ball in the back of the net on the stoke of half-time, but the flag was up to deny Knapman her 5th goal in three games.

Argyle started the second half much like the first in search of more goals. Alphous got in behind the St Austell defence again in the 47th minute, and if not for an excellent block by a combination of St Austell defenders, looked certain to extend Argyle’s lead. Argyle then hit the crossbar after Imy Crawford headed goalwards from a corner, but St Austell were able to clear the rebound away to safety.

Then with Argyle failing to find the third goal St Austell found a way back into the game; Lucy Solloway seized on a loose ball in behind the Argyle defence and fired into the bottom corner to halve Argyle’s lead. With the match poised at 2-1, the next goal would be vital, and Argyle found it almost immediately after conceding. Rosie Train got free on the left-hand side and whipped a cross into Jemma Rose on the edge of the box, who unleashed a sensational volley into the top corner to restore Argyle’s two-goal lead.

Argyle continued to push for more goals and were hit on the counter by St Austell, who got their 2nd goal in the 67th minute. Kaley Lane won the ball in midfield for St Austell and played Whitmore through on goal, who finished clinically into the bottom corner.

Argyle showed great character not to be fazed by conceding again and continued to patiently probe for a 4th goal. And in the 79th minute, they found it. Beth Ireland found space on the right-wing and clipped the ball goalwards, which looped over Frickleton in the St Austell net. Whether it was a cross or a brilliant lob, only Beth Ireland will know.

Argyle saw out the last 10 minutes comfortably and brought on 16-year-old Lucy Hack for her debut after coming through Argyle’s advanced development centre. Hack slotted in well to Argyle’s back three as Argyle saw out the rest of the game.

It was a pleasing performance for Argyle, against a spirited St Austell side, who made it 2 wins out of 3, and will eagerly await to find out who they will face next in the third round of the Vitality Women’s FA Cup.