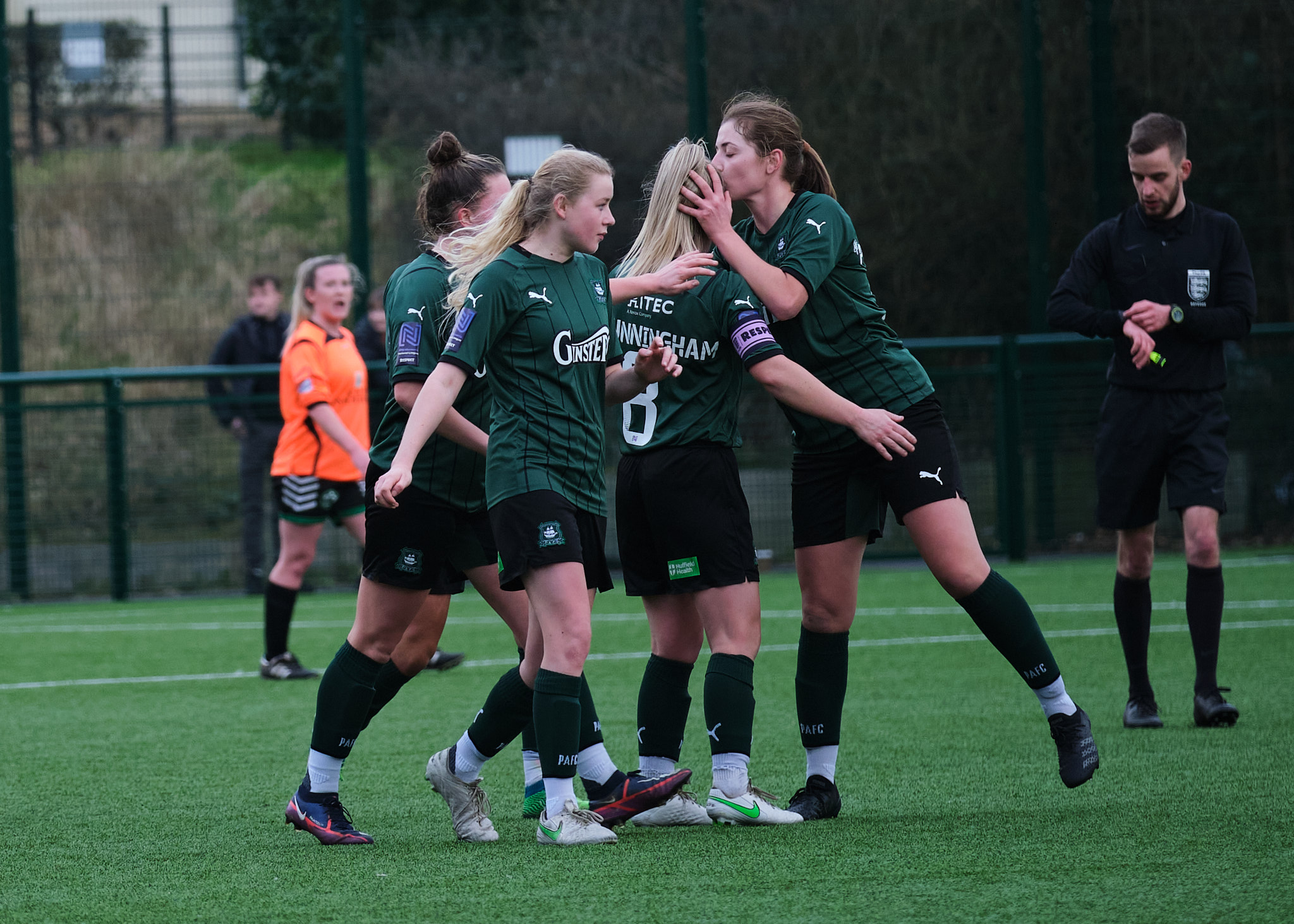 Plymouth Argyle Women gave their survival hopes a massive boost after a truly dominant performance saw them run out winners by five goals to nil against Keynsham Town.

In truth, Argyle could feel disappointed to have only scored five; such was their superiority over their relegation rivals.

From the first minute, the pattern of the game was clear. Rose played a long free-kick into the Keynsham box, which found Knapman, who drew an excellent save from Kierk in the Keynsham goal.

In the opening stages, Argyle saw the vast majority of the ball but had to be patient in their approach as they looked to break down a resilient Keynsham side, but in the 12th minute, Argyle were inches away from taking the lead. Captain Zoe Cunningham drove at the Keynsham defence and unleashed a shot from 25 yards which dipped and slammed against the top of the crossbar and bounced clear.

Six minutes later, Argyle struck the woodwork again. Ward found space on the left, and her cross found Knapman in the box, but her clever flick at the near post clipped the post before being cleared by the Keynsham defence.

Argyle continued to press for the opener with Knapman, Ward, Cunningham and Lane all drawing good saves from Kierk, who was having to work very hard to keep the Argyle attackers at bay.

Eventually, The Pilgrim's pressure saw them make the breakthrough. After a succession of corners, a ball was played up to Knapman, who challenged in the air with Kierk and the loose ball fell to Lane, and with the Keynsham keeper out of position, Lane slammed the ball home to give the Pilgrims a well-deserved lead in the 42nd minute.

In the 51st minute, Argyle saw a succession of shots blocked by a desperate Keynsham defence. Knapman, Ward and Train all had shots at goal before Kierk eventually picked up the loose ball.

Two minutes later, Knapman and Ward combined with Knapman playing Ward in on goal before Ward forced Kierk into an excellent save at her near post.

Then Argyle had three chances in three minutes. First, a cross from the left-hand side found Knapman again, but Kierk once again made herself big to block Knapman's close-range effort. Then Ward found Knapman again, who forced Kierk to palm away another shot before Train's cross found Giota, who's header dropped narrowly wide of the far post.

Eventually, Argyle did find the crucial second goal. Ward was fouled as she advanced towards the Keynsham goal, and Zoe Cunningham stepped up and fired a trademark free-kick into the top corner from 25 yards out to double The Pilgrim's lead.

It continued to be one-way traffic as Argyle searched for more goals, and Knapman struck the post again after winning another ball from a long free-kick.

Knapman would get the goal her performance deserved in the 66th minute. Pollock, on as a substitute, burst in behind the Keynsham defence and whipped an excellent cross into Knapman at the far post, who rose and planted her header into the top corner.

Argyle were not content with three goals and continued to look for more goals, with Pollock and Ward drawing more saves from Kierk before Alphous was played in behind, but again Kierk was quick off her line to make the block.

Ward and Pollock continued to test Kierk but eventually, the pair combined for Argyle's 4th goal. Pollock showed a neat touch to spin her marker on the halfway line and played Ward through on goal, and she clipped an excellent left-footed shot over Kierk and into the far corner for Argyle.

It was an excellent win for Argyle, who on another day could have scored even more goals. Their five nil win gives them a huge win in the relegation battle and allowed them to leapfrog Keynsham, leaving them only inside the relegation zone on goal difference. However, with Argyle still having games in hand and with a trip to the bottom side Hounslow to come next weekend, it could be a vital win for The Pilgrims come the end of the season.