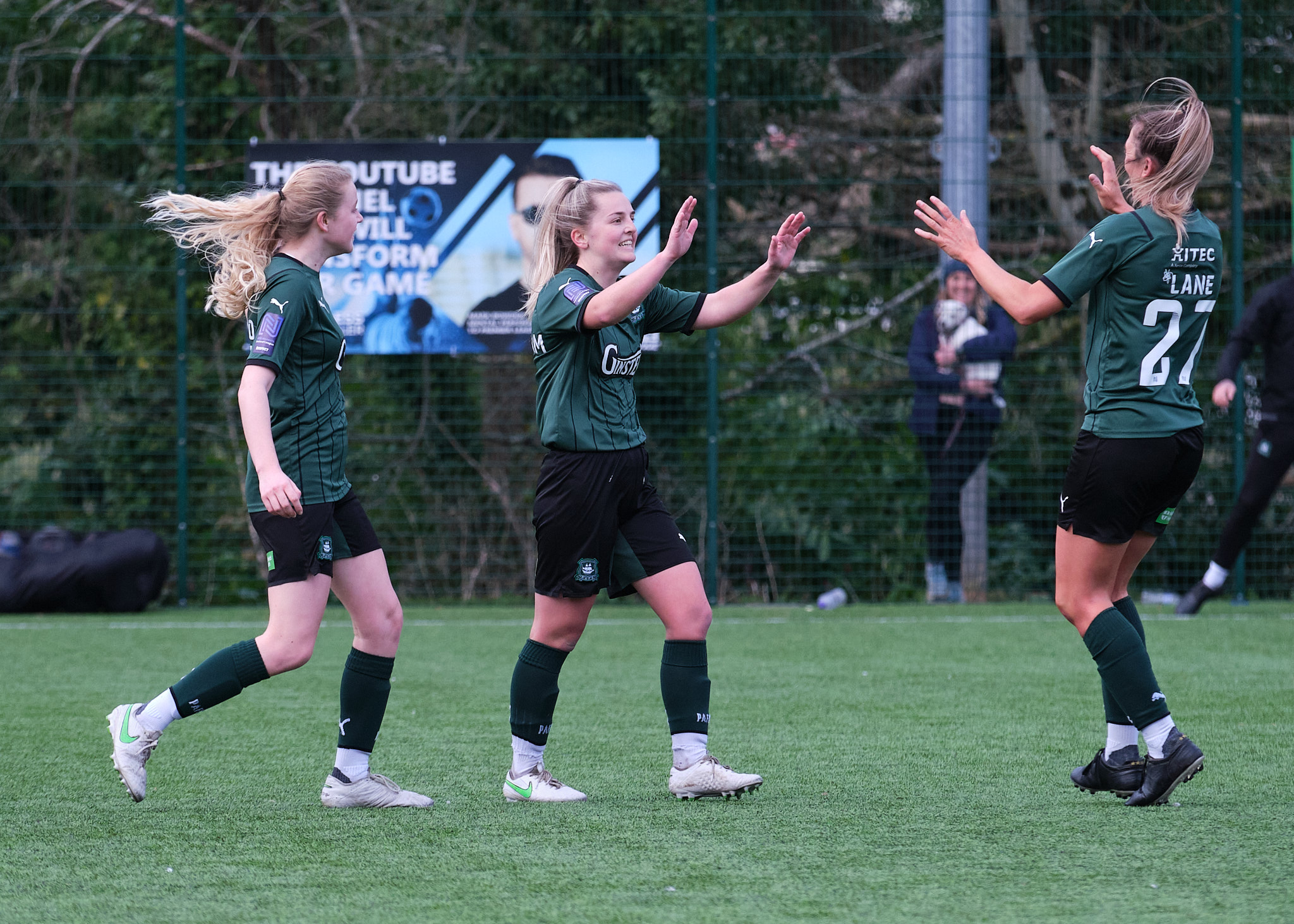 Plymouth Argyle Women continued their climb up the table after smashing relegation rivals MK Dons 5-1, to record their fourth league win in a row.

Argyle came into the game full of confidence but having lost to MK Dons in the reverse fixture and seen their opponents shock second-placed Oxford United last weekend, the Greens knew they had to be at their very best. The Pilgrims were also too aware that MK Dons themselves would be coming to Devon in search of a vital three points in their own bid for survival.

The game started at a frenetic pace, but it was Argyle who started the strongest and carved out a good opportunity within the first minute. Ellen Thomas found space on the right-hand side and put an excellent cross into Knapman inside the Dons' box, but her strong header went wide of Sansom’s far post.

It was a sign of things to come as Argyle did open the scoring in the 8th minute. This time it was Mari Ward who found space down Argyle’s left, and she curled the ball onto the head of Knapman, whose deft touch was enough to knock the ball beyond Sansom and give Argyle a crucial lead.

Both sides had started the game well, but it was Argyle that were crafting the greater chances, and they doubled their lead only seven minutes later. Beth Ireland got down the by-line on the right-hand side and whipped an excellent ball into the direction of Knapman, but before the Argyle striker could reach it, an MK Dons defender connected with the ball and inadvertently put the ball beyond her own goalkeeper to double the Greens' advantage.

Argyle were good value for their lead, but as the game progressed, MK Dons grew into the tie and halved Argyle’s advantage. Pepper cut inside the Argyle defence and fired the ball over Soper and into the back of the Argyle net.

The Pilgrims were then forced into a change with Zoe Cunningham coming off the bench to replace the injured Imy Crawford. Cunningham, who has been a key player for the Greens this season, made an immediate impact, extending Argyle's lead just four minutes after coming on.

Argyle pushed high up the pitch and pinched the ball off the MK Dons defence before working the ball to Cunningham, who dropped the shoulder, cut inside her marker and curled an exquisite finish into the bottom corner.

It was an excellent response from Argyle and Cunningham, but with nothing to lose MK Dons continued to attack and nearly got a second goal in the 43rd minute. A corner was played all the way to the far post, and a Dons player rose for a free header but planted her opportunity high and wide of the Argyle goal.

MK Dons' profligacy in front of goal was a let-off for the Greens, who nearly added a fourth only a minute later. Cunningham burst into space on the right-hand side and cut the ball back to Ward on the far side of the box, but her audacious chip fell wide of Sansom’s post, and MK Dons cleared the ball to safety.

After a frantic first half, Argyle showed greater control of the game in the second and looked to further extend their lead. However, MK Dons were not out of the game yet, and Argyle’s defence were doing well to keep the impressive Taho and Wood from carving out any clear opportunities.

In the 50th minute, Wood nearly tested the Argyle defence, going on a mazy run and beating a couple of players before Ellen Thomas held strong at the back and did well to hold her up and clear the danger.

Then in the 62nd minute, Argyle did find a fourth goal. Cunningham went on an excellent run of her own before sliding Knapman in behind MK Dons. Knapman’s shot beat Sansom before cannoning off a couple of Dons players and ending up in the back of the net.

Argyle’s fourth goal seemed to knock the wind out of MK Dons, and The Pilgrims went in search of more goals.

It was Mari Ward’s turn to run at the defence as she carried the ball from the halfway line, beating three or four MK Dons defenders before her final shot took a slight deflection into the grateful grasp of Sansom.

In the 75th minute, Jemma Rose tried her luck from range, but unlike last weekend, her effort was narrowly over the crossbar.

Only a minute later, Argyle had their fifth goal. Cunningham went on another excellent run and burst into the MK Dons box only to see her shot well saved by Sansom. Then as MK Dons attempted to play out from the back, Argyle won the ball back and played it to Cunningham, who fired left-footed into the bottom corner from the edge of the box for her second goal of the afternoon.

Argyle went close to adding a sixth, but Ward and Pollock were both thwarted by the impressive Sansom. Argyle did get the ball in the back of the net in stoppage time, but Cunningham was denied a hattrick after her header was ruled out for offside.

It finished 5-1 to Argyle and gave The Greens a massive three points, which moved them up to 9th position. Argyle Women are now two places and four points outside the relegation zone and still have up to three games in hand on many of their rivals.