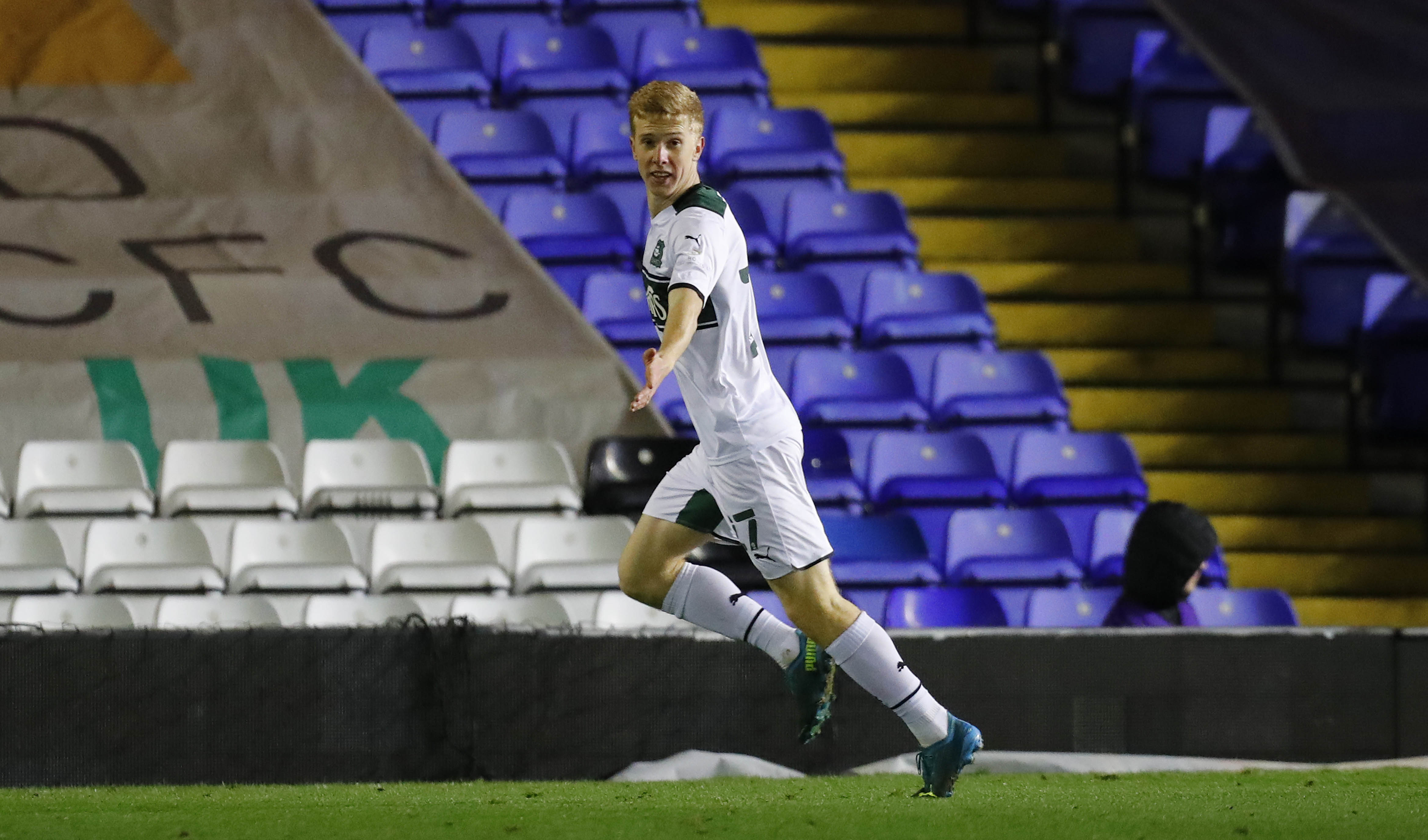 It may have taken 104 minutes, but Argyle made their dominance tell against Sky Bet Championship opposition, defeating Birmingham City 1-0 after extra time in a thrilling Emirates FA Cup third round tie.

The Pilgrims produced the vast majority of chances throughout the match, and only strengthened their grip on the game when George Friend was sent off on 68 minutes. Whilst they couldn’t find a breakthrough inside the 90, Argyle refused to be denied, and found a winner via substitute Ryan Law’s ferocious strike in the first period of extra time.

The Pilgrims’ first game since Boxing Day, due to postponements caused by COVID-19 and injuries within the squad, manager Steven Schumacher still had limited numbers to select from. Three changes were made from the victory at Cheltenham Town, with debutant James Bolton, Adam Randell, and Ryan Hardie returning in place of Kieran Agard, James Wilson, and Panutche Camara – the latter beginning international duty with Guinea Bissau at the African Cup of Nations. A youthful bench of just eight players included a place for latest Argyle signing Alfie Lewis.

City, who had only played two games since December 18, made five changes from their defeat to Queens Park Rangers three days prior, omitting a handful of first-team regulars, but boasted Premier League experience with Neil Etheridge, George Friend, Gary Gardner, and captain Troy Deeney.

Schumacher stated ahead of the tie that his side had nothing to lose against Sky Bet Championship opposition, and started the game on the front foot. Jordon Garrick broke through the Blues’ back line in the third minute and forced a scampering clearance from goalkeeper Etheridge. The hosts looked to respond seven minutes later, with strike partners Hogan and Deeney forcing blocks with shots from the edge of the area.

The first clear chance of the game came for the visitors shortly after, as Danny Mayor excellently won possession on the centre spot and slipped through Hardie. Closing in on goal, but with an ever-tightening angle, the striker skidded an effort past the far post.

Both sides exchanged half-chances, before Garrick excellently found space on the left and whipped in a low first-time cross. Hardie was first to the ball, and went over after colliding with Friend, but minor penalty shouts were dismissed by referee Rebecca Welch.

The match had quickly become end-to-end, without a clinical touch in front of goal. Brilliant energy from Joe Edwards saw the full back run 60 yards before having a shot blocked. Argyle continued to show intent, as Hardie latched onto a long ball and rounded Etheridge, but was unable to keep the ball in play. Birmingham’s shot-stopper was triggering a few nerves in the home end, flying out again to half-clear a ball straight to Randell, who couldn’t capitalise with Etheridge out of his goal.

As the first half went on, the Greens became the only side posing a threat, but just couldn’t find the opening goal. Danny Mayor spurned a pair of 20-yard efforts, before Garrick struck wide with a similar shot. Blues fans voiced their displeasure at Argyle’s dominance – the only chance of theirs coming from a marauding run from Friend, ending with signature Dan Scarr block – but the score remained goalless going into half time.

The Greens’ trio of centre backs – including Bolton, making his first Argyle appearance after picking up an injury in pre-season – would’ve expected plenty more to deal with in the second half from their opponents. Schumacher’s side were also dealt a blow early in the second half, as Hardie was forced to depart with a shoulder injury, replaced by Niall Ennis. Birmingham did indeed have a strong opportunity in the 57th minute, winning a free kick on the edge of the area, but veteran Gardner hit the edge of a substantial Argyle wall.

The home side had not lost an FA Cup tie to team outside the Premier League since 2013, but struggled to make an impact for much of this game against Sky Bet League One opposition. Argyle came closer than ever in the 67th minute, as Garrick controlled a Mayor cross, but Etheridge was out quickly to smother his shot from six yards out.

Friend, who had only recently been booked for blocking an Argyle throw-in, then missed the ball in a full-blooded challenge on Ennis. Referee Welch had no hesitation in showing a second yellow card to the centre back, leaving Birmingham a man down for the remaining 22 minutes plus, potentially, another 30.

The visitors smelled blood. Edwards nicked the ball in midfield, sprung and counter, and played in Garrick, whose fierce shot was instinctively palmed behind. A couple of minutes later, Conor Grant found the goal gaping as a corner was poorly cleared, but his stretching shot rolled the wrong side of the near post.

It’s an overused term in football, but inside 90 minutes, Argyle did everything but score. Ennis linked well with Mayor and finally beat Etheridge with a shot, but it cracked the near post. Moments later, the striker nodded a cross down for Grant to pull off an audacious backheel, which dribbled agonisingly wide. In stoppage time, Garrick was a stud’s length away from converting an Ennis cross, though the offside flag was raised. The scoreboard, somehow, remained untroubled, and the teams headed into extra time.

Mayor and Grant immediately called Etheridge into action from the restart, as they looked to kill the tie before the dreaded penalty shootout. However, tired legs were beginning to show on both sides. It made sense, then, that the freshest player on the pitch finally, finally broke the deadlock on 104 minutes.

Replacing Randell eight minutes previously, Ryan Law immediately caused havoc with width and pace on the left wing. Twice, he was unable to find a telling cross. At the third time of asking, Law unleashed a stunning strike into the far corner, sending 2,860 members of the Green Army into raptures.

Josh Williams and Alfie Chang came on for Birmingham for the final 15 minutes, as the hosts desperately tried to muster a response. Incredibly, the home side produced their best opportunity in the final minutes, as Chuks Aneke found space to shoot from 10 yards out. Michael Cooper, untroubled for much of the evening, produced a fantastic save low to his left, ensuring Argyle knocked out second-tier opposition, progressed to the FA Cup Fourth Round, and sent our fans home beaming.