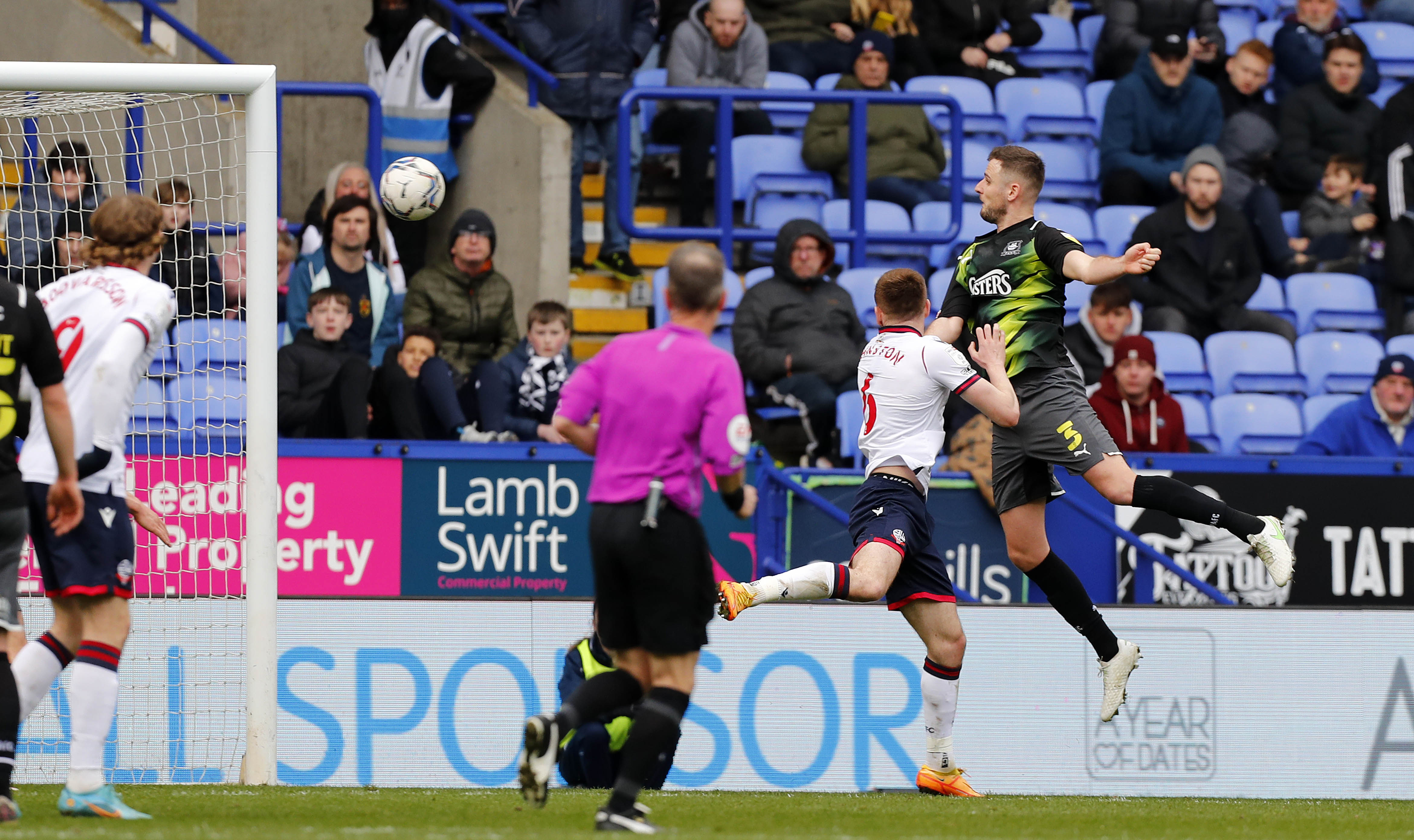 A classic away performance from Argyle ensured another three massive points in a thrilling race at the top of Sky Bet League One.

The Pilgrims edged a tight first half and got their reward with a towering Macaulay Gillesphey two minutes before the interval. It was then a case of supreme hard work, pressing and stout defending to keep the Greens in the play-off places.

Argyle manager Steven Schumacher stuck with the same side that defeated Wimbledon in midweek, while Bolton boss Ian Evatt opted for one change from the draw with Morecambe, Jon Dadi Bodvarsson replacing Amadou Bakayoko in attack.

The opening ten minutes was a case of two sides measuring up their opponent, with Argyle growing into their task through the controlled midfield work of Jordan Houghton and a strong defensive intervention from James Wilson after a low cross by Oladapo Afolayan.

Excellent defending from Gillesphey was next to blunt a break from Afolayan and the Greens quickly broke from the subsequent corner, Ryan Hardie racing down the right for a low cross that only just eluded the near-post run of Niall Ennis.

Bolton replied with a demonstration of their countering credentials, Dion Charles slipping a pass to Afolayan in the box but his shot on the turn was scuffed into the arms of Mike Cooper.

The game was heating up and a quick corner from Houghton released Hardie for a shot across goal, well held by young ‘keeper James Trafford. James Bolton then took his turn to repel a home attack, showing terrific patience to hold up Charles before blocking the shot.

A super cross from Joe Edwards was headed into orbit by Ricardo Santos and Trafford was able to snaffle the ball under pressure from Hardie. A second Edwards burst created room out wide for Ennis to clip in a cross cleared by former Green Will Aimson.

The Pilgrims were the side in the ascendancy and that was perfectly underlined by a thumping header from Gillesphey into the roof of the net. Houghton’s back-post corner was perfect for the Argyle number three and the power on his forehead proved too much for Trafford to stop.

The half ended with an Edwards’ shot from 22 yards held by the home custodian and Argyle continued their momentum after the break, pressing Wanderers all over the park with tremendous intensity.

Great strength from Ennis allowed him to wriggle along the line and cut the ball back for Edwards, who first dummied to shoot and then steered a low effort toward the corner, just about cleared by the scampering Santos.

Bolton mustered their first attempt of the half with a bouncing effort from Afolayan palmed wide by Cooper and the Pilgrim stopper did an even better job in brilliantly repelling a close-range header from Charles on the hour.

Gradually, Wanderers were building a spell of pressure and Schumacher opted to add some fresh legs into his midfield, introducing Panutche Camara for Ryan Broom.

Evatt also turned to his bench, bringing on a fresh strike-force in the form of Bakayoko and Elias Kachunga, and a beautiful chipped cross to the back stick from Afolayan picked out Kachunga for a downward header somehow kept out by the legs of Cooper.

Bakayoko was next to have a pop, swivelling for a shot straight at Cooper after a decent move from Bolton, as the Pilgrims turned to Luke Jephcott and Steven Sessegnon in place of Ennis and Conor Grant for the final 10 minutes.

Bolton continued to prod and probe, with a cross from substitute Kieran Sadlier headed clear by the impressive Gillesphey, as the Pilgrims continued to show outstanding defensive discipline and resilience.

A late injury to Marlon Fossey reduced Bolton to ten men for the closing stages, as more good work from Wilson thwarted the increasingly desperate Wanderers.

Job done for Argyle and attention turns to a Home Park showdown against Portsmouth on Tuesday night.