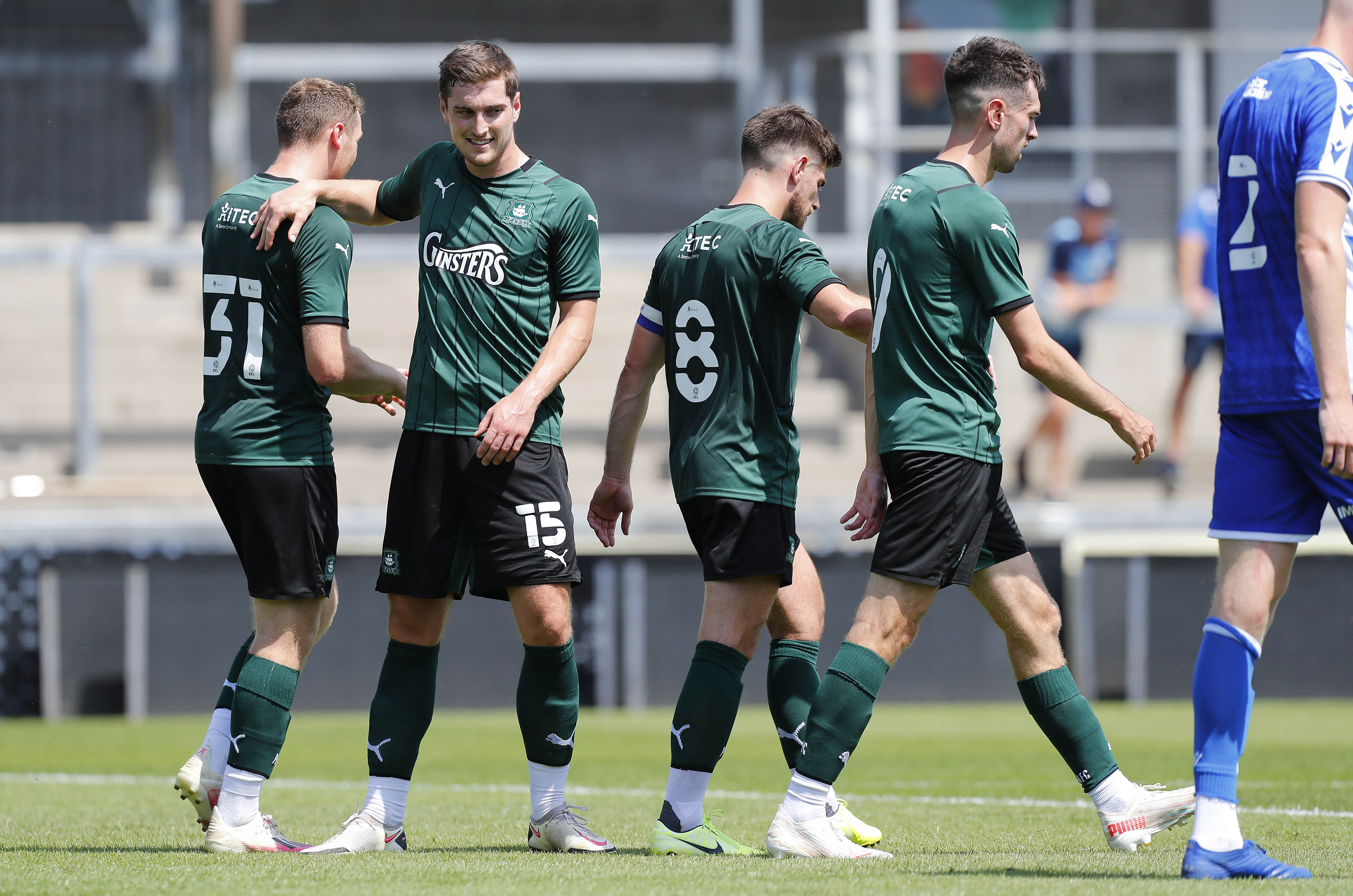 A penalty apiece either side of half-time ensured that honours were even between Argyle and Bristol Rovers in a pre-season friendly at the Memorial Stadium.

The Greens enjoyed the better of the chances in the first half, and took a deserved lead when Luke Jephcott converted a penalty he had earned himself on 35 minutes. The hosts’ spot-kick arrived moments into the second half, and Aaron Collins sent Mike Cooper the wrong way to deny the Pilgrims victory in a second period bereft of goalscoring opportunities.

Argyle manager Ryan Lowe named the same squad that put seven past Saltash United in midweek, and only two changes to his starting eleven – with Ryan Hardie coming in for Niall Ennis, and Macauley Gillesphey receiving his first Argyle start in place of trialist Brendan Galloway.

It was one of those changes, Hardie, who came closest to breaking the deadlock on 14 minutes, glancing a header wide of the far post after Mayor found room to cross on the left. Moments later, he was at it again, finding precious space on the penalty spot to receive Panutche Camara’s low cross from the right, before taking a touch, swinging a fierce right boot at it, and forcing a fine stop from Rovers’ trialist goalkeeper.

The Scottish striker’s  work-rate and pace between the lines was causing a problem for the Gas’ defensive line on a sweltering summer’s day, and he found himself space once again to latch on to strike partner Jephcott’s measured through ball on 21 minutes. Clear of the back marker, Hardie attempted to clip a lob over the stranded goalkeeper from the edge of the box, but his connection was not true, and the ‘keeper gratefully caught the scuffed effort.

It was his fellow frontman, Academy graduate Jephcott, who would force the breakthrough with 10 minutes left in the first half. Getting between his marker and Harry Anderson as a diagonal cross arrived from deep, the Wales under-21 international was felt a shove in the back from his marker and tumbled to the deck. He dusted himself off, and sent the ‘keeper the wrong way from 12 yards.

With 38 minutes on the clock, holding midfielder Jordan Houghton, who was only scheduled to play 45 minutes anyway, was removed as a precaution, with Adam Randell replacing him.

Rovers made five changes at the interval, and it was one of those, Harry Saunders, who would earn the penalty. Getting in behind on the right channel, Saunders raced Gillesphey to the dead ball line, before feeling contact from the former Brisbane Roar man just inside the box.

The referee took a few moments to make the decision, before awarding the hosts an opportunity to level things up. Collins duly obliged.

A combination of soaring temperatures, with the Memorial Stadium registering just shy 30 degrees centigrade at half-time, and a raft of substitutions from either side contributed to a staccato second half in Bristol, with chances not as free-flowing as they were in the opening 45.

Argyle's next opportunity came shortly after the leveller, when Hardie drifted short to receive a quick corner, before curling one tantalisingly across the goalmouth from an acute angle. If it had fizzed a few inches left, he might’ve scored himself, and a few right, one of the queue of Argyle bodies flooding the six-yard box would surely have bundled it over the line.

A flurry of late chances arrived after the final drinks break. Conor Grant, who started the game at left wing-back and finished it in central midfield, carved open an opportunity to shoot from just outside the box, but substitute goalkeeper Jed Ward held his effort.

At the other end, the Greens’ sub stopper Callum Burton made an excellent reaction save to deny Owen Brain from 15 yards.

Perhaps the best chance to snatch a winner came as the clock ticked towards 90 minutes. Grant’s free-kick from the left found Niall Ennis unmarked at the back post. His header was true, and goal-bound, but a defensive deflection carried it
narrowly wide.

Next up, Swansea City - with the Green Army back at Home Park.