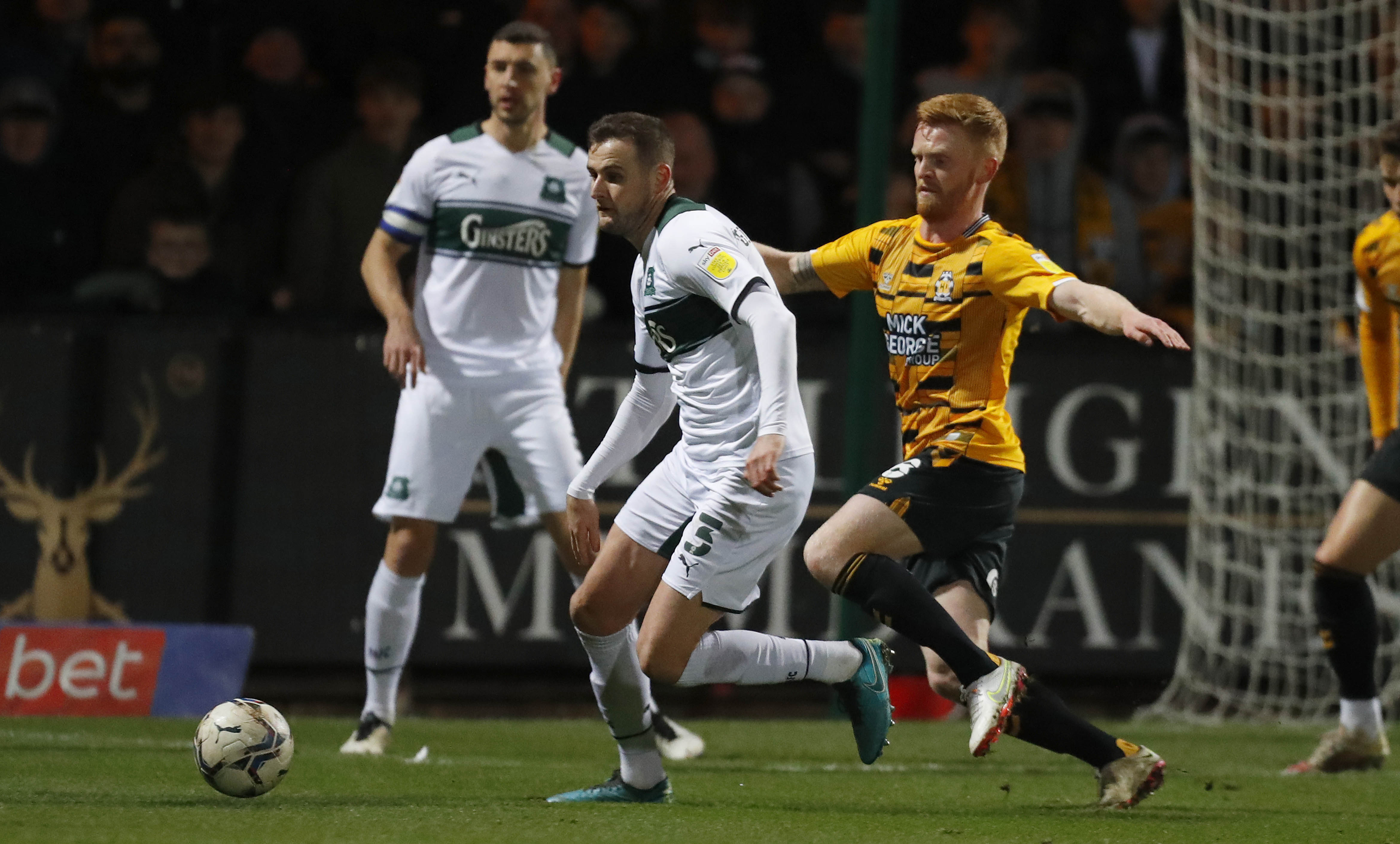 In the course of a 46-game League One season, there will be the odd occasion when things just don’t go your way.

A Tuesday night trip to Cambridge proved that occasion for the Pilgrims, as an early lob from Sam Smith and a highly controversial second by Jack Lankester on the stroke of half-time was ultimately enough for a home win.

Argyle manager Steven Schumacher freshened his ranks with three changes from the weekend win at Gillingham. Ryan Broom, Adam Randell and Luke Jephcott came in for Joe Edwards, Jordan Houghton and Jordon Garrick, with James Wilson taking the captain’s armband and Steven Sessegnon included on the bench for the first time.

Cambridge battled to a 2-0 defeat of Accrington on Saturday and the hosts made a dream start, as a long ball over the top found the run of Smith, who calmly lobbed a confident finish beyond the advancing Mike Cooper for an opener on seven minutes.

Buoyed by the goal, Cooper was then forced into a brace of flying saves from curling efforts by James Brophy and Lankester, both heading for the top corner before Argyle’s young custodian made his interventions.

The Pilgrims settled with a surge down the left and, while Conor Grant’s cross was headed wide by Panutche Camara, a sustained period of possession and territorial dominance qualified as a strong response to the early setback.

Fizzing deliveries continued to test the home defence, with Jephcott twice going close to finding a clean head on the ball before Smith reminded the Greens of his threat with a run in behind and scuttled shot that proved comfortable for Cooper.

After a scrappy spell, Niall Ennis changed the dynamic with a bustling run and pass to Grant, who quickly returned the favour with a cross glanced wide by the young striker.

The Greens then fell further behind to a hotly-disputed second goal. Grant raced back to cover a long ball forward and was clearly tripped by Lankester, who sauntered through to steer a neat finish past Cooper.

Referee Robert Madley, and his assistants, somehow missed the infraction, leaving Argyle with a second-half mountain to climb.

Smith forced an early low save from Cooper after the restart, followed by a flashing cross from Brophy that ricocheted around the Pilgrim box, with Macaulay Gillesphey eventually clearing the danger.

Ryan Hardie was introduced for Jephcott on 56 minutes, as the Pilgrims looked to build some attacking momentum against a robust Cambridge defence. The next Argyle change saw Sessegnon handed his debut in place of Broom.

In general, however, the Greens were unable to find the passing rhythm that has yielded so much success this season and it needed a fine interception from James Bolton to prevent Smith from having another sight of Cooper’s goal.

Argyle replied with a lofted cross that prompted an almighty scramble in the home box but, perhaps befitting the pattern of the game, the loose ball refused to fall nicely for the lurking Camara and Danny Mayor.

Adam Randell was next to reach the byline for a cross just about palmed clear at full stretch by Dimitar Mitov. Garrick for Bolton was the final roll of the substitution dice for Argyle in the closing ten minutes.

A clever overhead from Ennis was deflected on to the roof of the net, as Argyle cranked up the pressure, and the subsequent corner from Randell needed tipping over by Mitov. Grant took the next set-piece, which was flicked inches wide by a home head.

Another Randell corner in the final minute spread further panic on the Cambridge goal-line but, once again, Argyle were left frustrated by the ball bouncing to safety. Cooper made one final save from a Shilow Tracey counter but the night belonged to the home side.