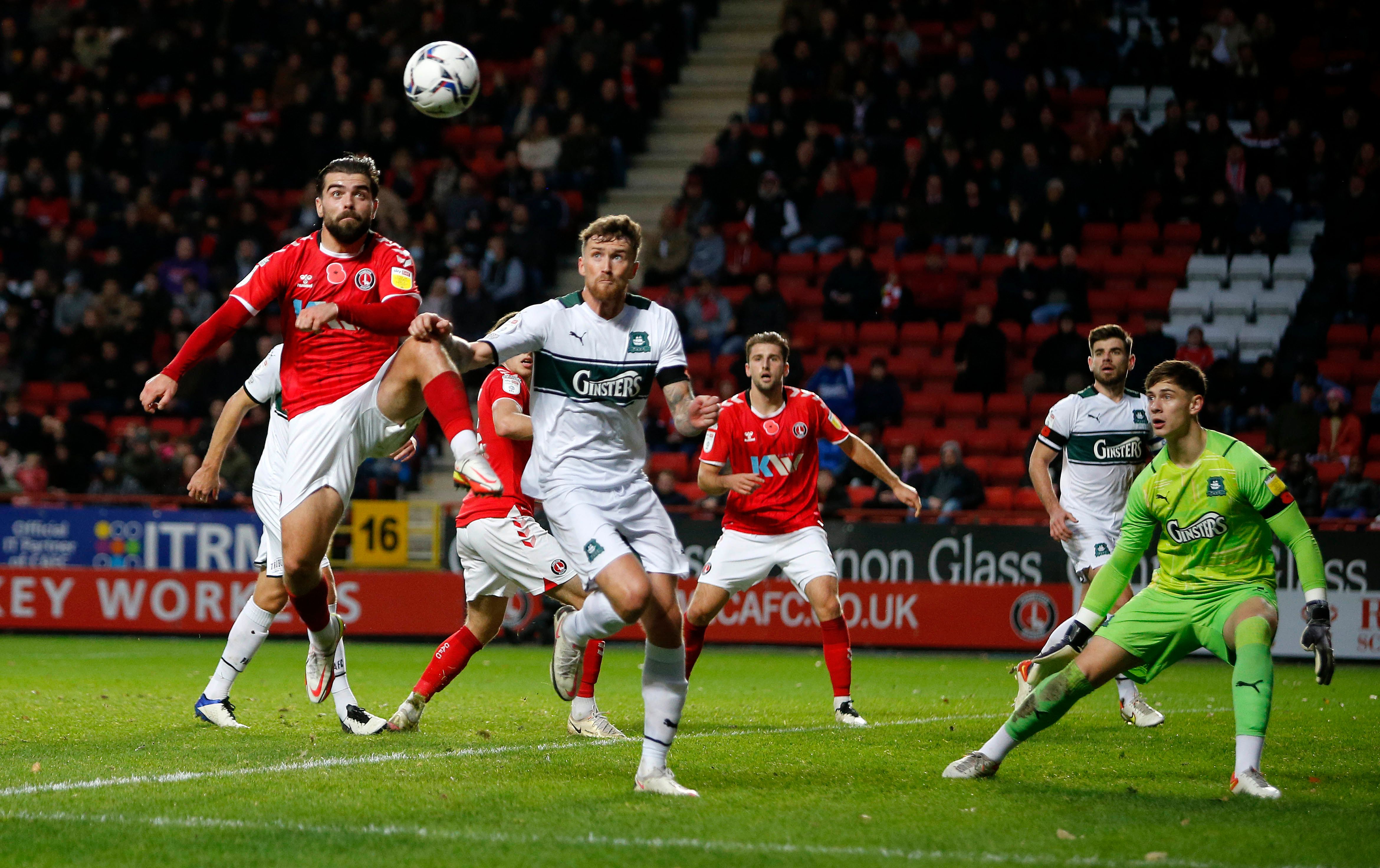 The Greens gave everything in the search for a breakthrough but, for the first time since the opening day of the league season, it was not to be our day.

Argyle boss Ryan Lowe named the same side that beat Sheffield Wednesday in the Emirates FA Cup, although the Pilgrims did welcome back Luke Jephcott and Brendan Galloway to the bench after international duty.

Charlton, meanwhile, won 1-0 at Burton last week and hosted Argyle on the back of a four-match unbeaten run in the league with just one enforced change, Washington replacing the suspended Jayden Stockley.

An early free-kick from Conor Grant caused immediate concern for the Addicks, as the ball deflected off the shin of Macaulay Gillesphey and crawled inches past Craig MacGillivray’s far post.

Charlton responded with a fizzing cross from Elliott Lee, cleared under pressure by Grant, quickly followed by similar defensive work from Joe Edwards, with Purrington looking to pounce on the deep delivery.

After a brief period of Pilgrim possession, a Charlton corner found the head of Alex Gilbey for an effort deflected over by Panutche Camara. Argyle settled again by retaining the ball but it was a quiet first quarter for front pair Jordon Garrick and Ryan Hardie.

A swinging deep cross from George Dobson posed another problem, as Lee arrived late to head against the outside of the post. Argyle recovered to work a good position for Ryan Broom but his stabbed cross was just beyond the run of Hardie.

Set-piece defending was the early theme for the Greens and Dan Scarr was his customary colossal self in the penalty box. Edwards changed the pattern with a sumptuous pass behind the Charlton defence and Hardie’s shot back across goal from a tight angle was brilliantly saved by MacGillivray.

Bright play from Garrick in the right channel stretched the home defence again and the ball was recycled to Edwards for a surge through the middle, but the low shot was comfortable for MacGillivray.

A tight first period ended with the scores blank and, while Charlton had racked up the corner count, Argyle’s resolute defending ensured relatively little work for goalkeeper Mike Cooper.

Josh Davison curled wide in the first minute of the second half but Argyle soon settled with Jordan Houghton conducting the midfield orchestra. Charlton skipper Jason Pearce was forced off through injury on 55 minutes, replaced by Welsh international Chris Gunter.

Argyle immediately sought to expose the reshuffled defence with a break down the right and the clipped cross from Edwards had a fraction too much juice for the run of Hardie. Gradually, the Pilgrims were pinning Charlton back and a cross from Grant skimmed off the head of Hardie before drifting to safety.

Moments later, however, the Addicks snatched the lead, as Purrington peeled off at the far post and controlled the bouncing cross before lashing a low volley under the diving body of Cooper.

After patient build-up play, James Wilson picked out Grant for an ambitious volley screwed wide, as the Greens looked for a quick riposte, although there was soon relief at the other end when Washington slammed a well-struck half-volley inches over.

A delightful ball inside the full-back from Camara then released Grant for a low cross that just needed a touch for a certain equaliser, but Charlton instantly countered and Gilbey was denied a second by Cooper superbly saving with his feet.

Hardie and Broom were withdrawn for Jephcott and Mayor, making his 100th Pilgrim appearance, and the fresh legs were involved in creating room for a low Grant drive that was held by MacGillivray.

Argyle were camped in the Charlton half but the packed home defence did a good job in denying any clear-cut opportunities, and the Addicks pinched a decisive second on the break, Washington finishing in style from the right angle.

A late appearance for George Cooper from the bench was a positive sight after such a frustrating spell out through injury and Pilgrim thoughts will turn quickly to the visit of Wycombe Wanderers on Tuesday evening.