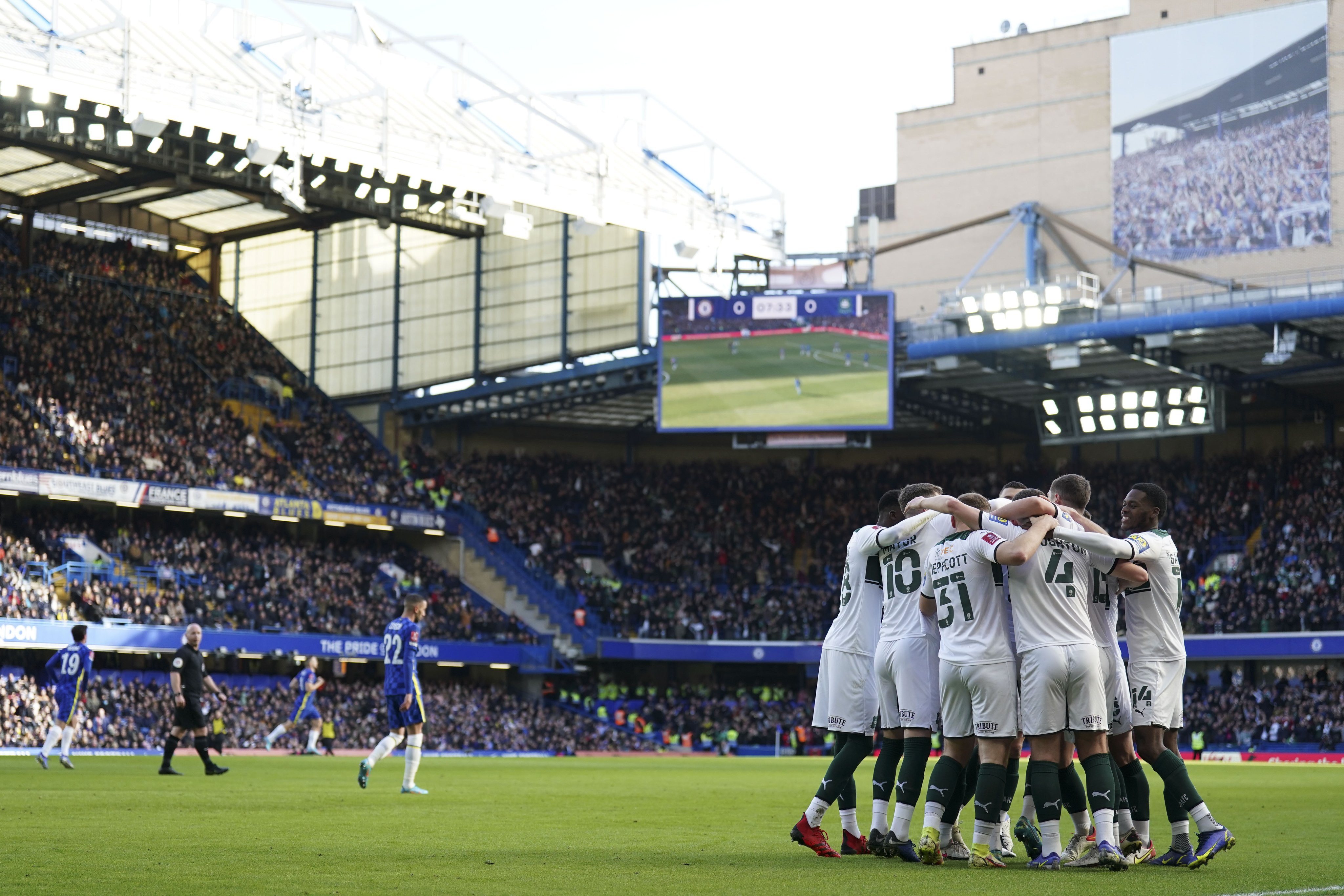 No Pilgrim will ever forget the day we came so very close to taking the European Champions all the way to a penalty shoot-out.

Argyle ignited the possibility of an FA Cup dream with a terrific Macaulay Gillesphey header on eight minutes. Chelsea were frustrated all the way to the brink of half-time, when home captain Cesar Azpilicueta converted a skilful leveller.

The Greens defended brilliantly in the second half to force extra-time but ultimately went out to a well-taken goal from substitute Marcos Alonso.

On a day of heroic performances, Argyle kept piling forward in search of the goal that would force penalties, and were given a big chance when Ryan Hardie won a spot-kick three minutes from time, but Kepa made the save to rescue his exhausted team of global stars.

After a two-week break from Premier League action, Chelsea named a side packed with international talent, including the likes of German giant Antonio Rudiger at the back, Italian midfield icon Jorginho and Belgium’s powerhouse striker Romelu Lukaku.

A bright start from the Blues forced Mike Cooper into an early interception as a deep cross sought the run of Lukaku before a low Jorginho volley was arrowed narrowly wide.

It proved to be the calm before a wonderful Argyle storm, as over 6,000 Pilgrims inside Stamford Bridge, and countless more around the world, screamed with delight after a superbly-worked opening goal.

Jordan Houghton was the architect from a free-kick on the left flank, whipping over the perfect delivery for Gillesphey to glance a delightful header beyond Kepa and inside the far post.

It was the perfect set-piece routine and the perfect start, but the Chelsea reply was a sweeping move down the left and a lay-off from Lukaku was thumped against the bar by Mateo Kovacic.

In a thrilling start, Argyle were soon back on the attack, as a fabulous team move culminated in a Luke Jephcott cutback for Camara on the edge of the box, but his curling effort was charged down by Malang Sarr.

The game calmed into a period of assured defensive shape from the Greens, with Gillesphey, Dan Scarr and James Wilson doing a fine job of protecting the penalty area, ably assisted by wing-backs Conor Grant and Joe Edwards.

In midfield, Camara, Houghton and Mayor were working tirelessly, with Jephcott and Garrick occupying Chelsea’s illustrious back four, as the half-hour mark arrived with Cooper enjoying a relatively quiet afternoon in the West London sunshine.

Safe hands from a deflected Hakim Ziyech shot was greeted by another Green Army roar of approval. When Callum Hudson-Odoi did find space at the far post, his close-range header cannoned off the bar and away to safety.

Chelsea skipper Azpilicueta opted to try his luck from distance and Cooper got down smartly to his left to parry clear, as the home side looked to turn the screw.

Camara was covering every blade of Chelsea turf in a display that typified the Argyle approach but the Pilgrims were grateful to the woodwork for a third time on 38 minutes, when a raking drive from Kovacic struck the inside off the post.

Eventually, home pressure was rewarded with an incisive move down the right and a low cross from Mason Mount was cleverly flicked past an exposed Cooper by Spanish international Azpilicueta.

After another tremendous Scarr clearance, Jorginho whistled a drive inches wide to conclude a superb 45 minutes from the Pilgrims.

The second period opened with a flurry of Chelsea corners, all defended with discipline by Argyle, but there was great relief when a swift exchange between Mount and Ziyech resulted in a cross that just eluded the back-post lunge from Lukaku.

Successive blocks from Scarr and Gillesphey thwarted the next Chelsea foray before Cooper raced from his line for another solid save at the feet of Alonso. Schumacher then opted to freshen his attacking ranks with the introduction of Ennis for Jephcott.

After soaking up 20 minutes of second-half pressure, Argyle found their passing rhythm again and won a corner through the perseverance of Grant but Houghton’s whipping delivery was punched clear by Kepa.

Seconds later, Chelsea substitute Kai Havertz was sent clear for a run on goal, only for captain Edwards to somehow race back for an incredible goal-saving challenge. Gillesphey repeated the trick with an equally astounding block on Lukaku.

Hardie returned from injury to replace Garrick for the final quarter, as Edwards found room for a swinging cross nodded wide by the advancing Camara.

A beautiful pass inside the left channel from Gillesphey found the run of Hardie, who was thwarted by Kepa racing to narrow the angle. It was a big chance for Argyle and another sign of the growing Green threat.

Chelsea responded with Lukaku using his strength to feed a pass into the path of Mount for a rising drive from 18 yards, brilliantly tipped over by the imperious Cooper, as a fantastic game took yet another compelling twist.

Randell for Mayor was the next Pilgrim change before Cooper produced one more super save for his scrapbook, palming wide a Havertz effort, although the offside flag was raised in the aftermath.

Former Chelsea youngster Houghton took his turn in the list of incredible blocks to frustrate Ziyech on 85 minutes and Wilson then came across for a perfectly executed slide challenge on Timo Werner.

Referee Simon Hooper blew his whistle for extra-time at Stamford Bridge and the Green Army continued to provide their extraordinary, magnificent support.

Mount fizzed a 22-yarder wide before Broom and Ryan Law came on for the weary legs of Camara and Grant. Understandably, however, fatigue on both sides was the dominant factor in the first period of extra time.

Chelsea then found a decisive moment of international class on 105 minutes, with Havertz conjuring room for a cross from the right touchline and Alonso was in the right place to steer a neat finish into the far corner.

From somewhere deep within, Argyle found the energy for one last push. Law whipped over a terrific cross that fell to Broom for a sweet strike thumped clear by Kepa. The loose ball came back to Broom for a second attempt just about blocked by the body of Sarr.

The European Champions were clinging on and exhausted in the closing stages. A mistake by Sarr gifted Hardie a glorious chance and he compounded the error by bundling over Argyle’s leading scorer for a clear penalty.

Sadly for Hardie and Argyle, Kepa guessed right and made an excellent save from the spot-kick. It was an incredibly harsh conclusion but nothing can take away from an astonishing performance from every single player, supporter and club official.

A proud day to be a Pilgrim.